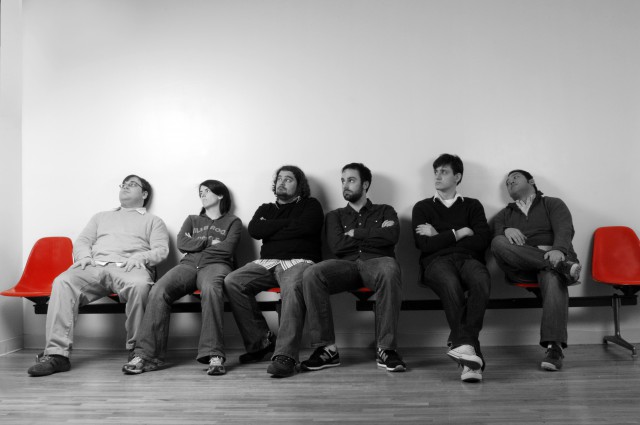 Comedy’s one of the world’s great equal opportunity employers. It doesn’t matter what you look like, your age, socio-economic status or background. Gay, redneck, Asian, woman (or all four!) — humor not only reaches across the boundaries that separate us, it pulls things out of the darkness and into the light, and allows us to laugh at ourselves and the way we see the world.

Putting comedy within anyone’s reach has been one of the goals of the Upright Citizens Brigade, a comedy troupe that enjoyed a run on Comedy Central from 1998 to 2000 and now operates theaters in Los Angeles and New York that have served as stepping stones for many comedic actors and writers. The company also tours the nation, putting on comedy shows coast-to-coast.

While the TV show featured sketch comedy, the theatre’s roots are in improv, going back to the original American improv troupe, Second City in Chicago, where its founders studied.

It began as a troupe It began as a troupe in the early ’90s, featuring members such as Adam McKay (who started Funny or Die! with Will Ferrell and co-wrote several of his films), Saturday Night Live member Horatio Sans and Neil Flynn (Scrubs, The Middle), among others.

In 1996, four members (including Parks and Recreation/SNL star Amy Poehler) moved to New York, where they founded the Upright Citizens Brigade Theatre, and starred for three years in the Comedy Central show of the same name. Besides hosting improv shows, they started offering classes that grew beyond improv into sketch comedy, standup and, most recently, video production.

“We’re trying to become a well-rounded comedy outfit, but our roots are all in improv,” Edwards says. “Someone that is new to UCB, we always start them with improv and watch them expand into sketch, video or stand-up from there.

“There isn’t such a huge disparity between what makes a good standup comic, a really good improviser and a really good sketch writer. People who have a knack for comedy, people who have a knack for the irreverence of it, they can do just about anything in that field they want to. A comedian is sort of a comedian and then you can find your niche you enjoy and excel at more.”

Edwards cautions that while many people sign up for their classes thinking they’ll take a few improv courses and then beeline for SNL or the NBC comedy lineup, that’s not how it works. At least for most.

However there have been some very high-profile successes, even beyond Poehler and McKay. Much of NBC’s Thursday lineup is populated with UCB alums, including The Office (Ed Helms, Ellie Kemper, Zach Woods), 30 Rock ( John Lutz, Sue Galloway, Jack McBrayer), and Parks and Recreation (Poehler, Aziz Ansari, Aubrey Plaza), as well as Community’s Donald Glover. On top of that, many of the members have gone on to write for the Daily Show, The Colbert Report and SNL.

“We’ve gotten tremendously lucky in that a lot of our best people have gotten really big breaks and have made some pretty notable splashes,” Edwards says. “UCB is in a very fortunate place where a lot of the companies, agencies and networks sort of look to us as a source for talent … [but] the point of UCB is not to make people famous; the point is to put really funny comedy on our stage and our websites. We really want people who are interested in that to come and then sort of whatever happens after that.”

But as much success as the company and its players have experienced, it still comes down to making you laugh. Unlike almost all televised or filmic comedy, UCB’s touring shows are unscripted long-form improv. That means that from out of thin air — often using suggestions from the audience — the troupe’s members construct a story of interconnected scenes, characters and ideas. There’s an energy about such performances because literally anything can happen, and there’s a danger performing without a net like this, which seems to make it that much funnier.

“People who have no idea what long-form improv is should come because they are about to be blown away,” he says. “Those who’ve seen Whose Line Is It Anyway or some improv will find this is the best longform improv on the road today. These guys are absolutely brilliant at what they do. If you’re a student of comedy, it’s an excellent primer; if you’re just an audience member, it’s a fantastic night.”

Chief among the night’s three performers is Eugene Cordero, whom Edwards has known for more than a dozen years, going back to when they used to do improv tours together for a different improv theatre. Cordero — who recalls Horatio Sans a bit — is joined by his wife, Tricia McAlpin, and Betsy Sodaro.

Sodaro’s a Colorado native who recently got a big break being upgraded from a guest to a regular on the pilot of the new NBC fall show Animal Practice, starring Justin Kirk as a kind of veterinarian Gregory House, M.D. All three live in Los Angeles and have been performing together for a while. Given the choice of performers from UCB’s three stages (two in NYC and one in L.A.) for his touring group, Edwards enthuses, “These guys are the best of the best.”

We took this opportunity to query Edwards on the value of fart jokes and humor based on hard impacts to the male groin. He took the high road rather than disparage the low brow.

“For me personally, I am man enough to laugh at just about anything,” he says. “I know some people will call a kick to the groin a cheap move, but I don’t know. If you’re laughing it’s worth it. But if the only thing I’m going to see for the rest of my life is kicks to the groin, I will really get tired of them. Then again, if the only form of comedy I’ll see for the rest of my live was The Colbert Report, I’d get sick of that too.”

Luckily, you won’t have to worry about improv’s freshness, since the product changes nightly.