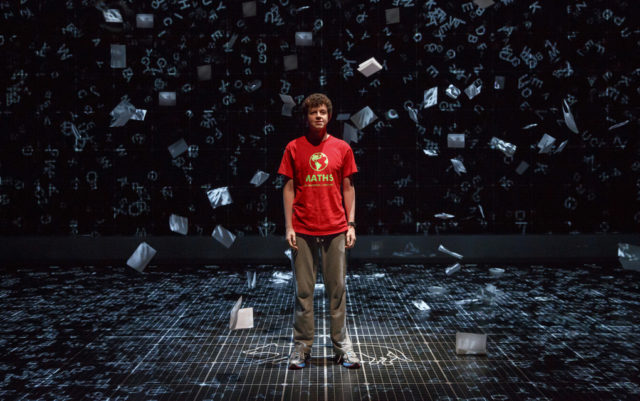 Two things are true at the start of The Curious Incident of the Dog in the Night-Time. 1) Christopher John Francis Boone always tells the truth. 2) Christopher did not kill Mrs. Shear’s dog, Wellington.

But when the dog turns up stabbed by a pitchfork in Mrs. Shear’s lawn with Christopher kneeling beside it, all fingers point to the boy. So, Christopher embarks on a mission to find the real culprit, and along the way, his orderly world begins to unravel.

The Curious Incident of the Dog in the Night-Time is based off the 2003 critically acclaimed book by Mark Haddon. The stage version debuted in London in 2012, and it came to Broadway two years later, winning five Tonys, including best play.

The story revolves around 15-year-old Christopher, who lives in Swindon, England. He’s good at math, he has a rat named Toby and he lands somewhere on the autism spectrum. But Curious Incident never dwells on this diagnosis. Instead, it goes for a lofty goal: putting the audience inside Christopher’s head.

In the boy’s world, day-to-day interactions and tasks can be rigorous acts of will. He doesn’t like to be touched and often crawls into the fetal position and screams when he’s overwhelmed. He struggles to understand common figures of speech and doesn’t like talking to strangers. In an effort to illuminate the workings of his mind, Curious Incident shows the audience what it feels like to be Christopher by illustrating the inner workings of a brain, where memories flow into thoughts into tangents then back into the present moment.

Christopher’s mind is constantly turning, dissecting, analyzing, questioning and reasoning. Capturing this process is what makes Curious Incident a dynamic piece of theater.

The set becomes like another character on stage. The three grid-paper walls serve as a tapestry for Christopher’s mind, whether solving a problem, reading a map, analyzing a clue or floating through space in a daydream. Within each wall is a series of compartments and doors, and just as a brain can recall whatever information necessary, Christopher can open a slot and pull out anything he needs.

Curious Incident manipulates time and space by utilizing a chorus of characters to help illustrate Christopher’s thoughts and feelings. These characters are almost constantly in motion, moving alongside Christopher in intricate choreography. While not quite dancing, the characters help to bring the brain to life by personifying its functions through motion. The play also features an electronic soundtrack that orchestrates a mind that works like a computer.

While the first act introduces you to this world, the second act dives deeper into its reality. In doing so, we see Christopher’s struggles — how disorienting a train station can be or the confusing nature of simple directions. More so, we get insight into his family life, seeing his parents try to cope with his sensitive and unique mind. But the play transcends this particular family situation, making it relatable to any audience member. Christopher is an adolescent boy in a world that tells him to mind his own business, with a mother who doubts her ability and a father who constantly faces tough decisions in an attempt to protect his son. Each character is doing the best they can, and Curious Incident gives them space to grapple with problems while reserving any judgement.

The show is brought to life by a brilliant cast, notably Christopher’s parents Gene Gillette (playing Ed Boone) and Felicity Jones Latta (Judy Boone). Both Gillette and Latta bring depth to their characters, playing them with subtext and delivering subtle, yet powerful performances. Curious Incident also boasts an impressive ensemble that is just as important as any main character on stage. Constantly cycling through characters and functions, each member of the ensemble helps the story unfold.

But not surprisingly, the standout performance goes to Adam Langdon, who plays Christopher. It is one of those special roles that allows an actor to play a multi-dimensional character who rarely gets to be the center of the story. The character is funny, smart and challenging, and the audience never pities him. Langdon is captivating to watch and dazzles the audience with every fact he offers, math problem he solves or question he asks.

Curious Incident delivers theater magic in a non-gimmicky way, without compromising the fundamentals of an interesting story. It’s an exemplary piece of theater that combines clever writing, solid acting, flamboyant technical elements and a story that, at it’s core, is about family and understanding.

Christopher is a character searching for security and truth in a world that doesn’t always make sense. It’s the same challenge his parents face, and it’s the same ambition we all have. While each of our brains work in unique ways, we are often more similar than we realize. As Christopher’s dad says to his son, “We’re not that different me and you.”