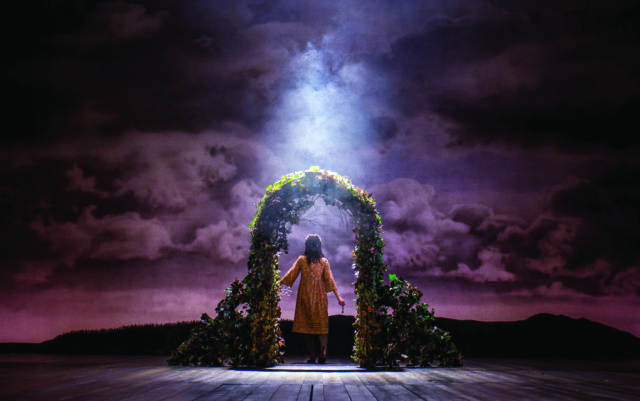 “Does everyone who dies become a ghost?”

It’s a complicated question posed by Mary Lennox to her uncle Archibald Craven. Mary recently lost her parents to cholera, and Archibald lost his wife during childbirth 10 years prior. While both navigate life in the lonely world, each are frequently reminded of all they have lost.

“They’re only a ghost if someone still alive holds on to them,” Archibold replies.

And it’s that background of death and grief against which The Secret Garden takes place.

Now playing at the DCPA through May 28, the show tells the story of newly orphaned Mary traveling halfway across the world from her home in India to her uncle’s house in England. Plagued by the memory of his wife, Archibald can barely tend to himself, let alone his niece. So, alone in a creepy mansion, Mary entertains herself any way she can. Through her wanderings, she unlocks the mysteries of the house, discovering her bedridden cousin and a forgotten garden left behind by his mother.

The show is based on the 1911 novel by Frances Hodgson Burnett, which also spawned several movie adaptations. The musical hit Broadway in 1991 and took home three Tony Awards.

More than a quarter century since its inception, the musical feels dated. While in no way does it need to be modern or progressive, it falls short of being a classic. And the show’s lofty ambitions might be to blame.

Burnett’s original story focuses on the children, making the parents players in the background, but the musical gives the adults more stage time. While exploring grief and loss through multiple characters makes the story more dynamic, by attempting so much, the show falls flat.

The list of characters is long and substantial and includes several secondary roles. Fitting in so many people and giving each their own song and chance to shine takes crucial time away from the main characters, making them weaker as a consequence. Character motivations get muddled in passing; storylines are picked up and dropped without development, and the web of relationships is cluttered. And if the main cast isn’t enough, the chorus of ghosts takes the stage every few minutes.

Instead of sticking to the most essential players and songs, important plot points get lost in the shuffle and touching moments don’t make an impact. The result is a show suffocated by excess. With a length of just over two hours, The Secret Garden might have benefitted from a Les Miserables opera-style treatment, or at least a similarly long runtime.

Among the show’s many elements, the music and lyrics are its strength. Twinkling melodies and heartfelt lyrics dance throughout the show. Certain songs infuse the show with moments of drama and emotion, while others capitalize off of the catchy, tongue-twisting rhymes of childhood.

The Denver Center’s cast delivers a strong production of the show. The large chorus and principal cast members are all talented, but the performance of the night goes to Carey Rebecca Brown as the ghostly mistress of the manor, Lily Craven. As a mysterious figure, Brown is on stage often, but with only a few spoken lines, she conveyed wisdom through a look or nod. Leading many of the prettiest songs, Brown dazzles with each number.

Along with the cast, the technical elements excelled. The costumes are beautiful and detailed, giving a modern yet classic take on the time period of the show. The set design is intricate and varied. As the show jumps from location to location, there is a seamless flow between them, with some lush scenes and magical moments sprinkled throughout.

As the name suggests, the show deals heavily with nature. When Mary stumbles upon her aunt’s once-thriving garden, she works to restore it to its former glory. The symbolism is not easily lost on the audience — the cycle of life, the process of grief, the rebirth after darkness. And while the show bites off more than it can chew, it serves as a nice reminder — just because a plant wilts, with a little love and care it can come back to life.