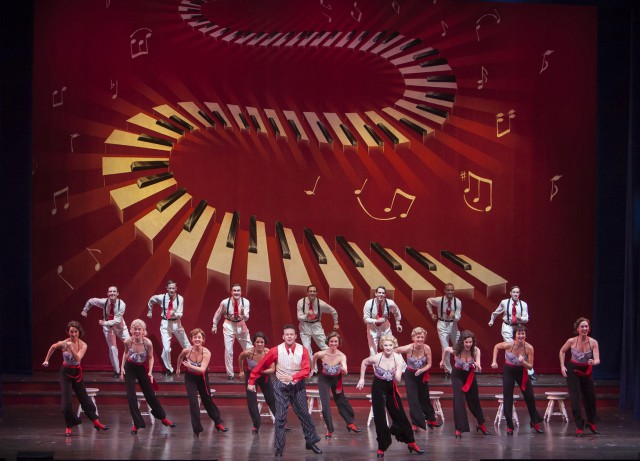 For many people, a white Christmas is the be-all and end-all of holiday cheer. Going to bed on Christmas Eve with flakes filling the air and waking up on Christmas morning to a world softened by a blanket of new-fallen snow simply can’t be beat. But even with all the bits and bytes of the Interwebs at our disposal, there’s still no predicting the weather. USA TODAY claims there is a 90 percent chance Boulder will have one this year, while Stormfax.com gives us a 50-50 shot at best.

It was renowned composer Irving Berlin’s longing for just such a magical yule that inspired him to pen the seminal, best-selling holiday classic “White Christmas,” and once Bing Crosby got a hold of it and crooned it with the perfect mix of wistfulness and hope, it became indelibly linked to the American holiday season. The song begat the 1954 movie, which 50 years later begat the 2004 stage musical, Irving Berlin’s White Christmas.

This family-friendly, old-fashioned, feel-good musical opens on Christmas Eve in Europe in 1944. Capt. Bob Wallace (Tom Galantich understudied by Michael E. Gold for the performance I attended) and Pvt. Phil Davis (Nicolas Dromard) are entertaining the men of the Army’s 151st Division with their song and dance routines. The gruff but much-respected Gen. Henry Waverly (Mike Hartman) closes their performance with hopes that the war will be a distant memory and all his soldiers will be home and happy come Christmas 10 years hence.

Exactly 10 years later, as Christmas 1954 approaches, Wallace and Davis have become super stars stateside. With their lime-green suits and pink ties, they wow the audience on the Ed Sullivan Show. The two men are scheduled to head to Miami for Christmas, but at the behest of an Army buddy, they decide to spend their last night in New York checking out a new sister act, The Haynes Sisters.

Judy (Kate Marilley) and Betty (Amy Bodnar) Haynes, it turns out, are not only beautiful but also legitimate up-and-comers in the entertainment world. Phil takes an immediate shine to Judy, while Bob and Betty have the prickly kind of meet-cute that virtually ensures they’ll fall for one another before the final curtain. Unbeknownst to Bob, Phil reroutes them from Miami to Vermont so that they can follow the sisters to their holiday gig at an inn and enjoy some snow, skiing, crackling hearths and hot cocoa.

Conveniently enough, the inn that booked the Haynes sisters turns out to be owned by none other than the now-retired Waverly. Unfortunately, the military discipline the General demands of his guests and the unseasonable heat wave gripping Vermont have conspired to push the inn to the brink of bankruptcy. Wallace and Davis decide to pull out all the stops to save the General’s inn and, hopefully, to give the sisters a leg up in showbiz (and, possibly, into their respective beds).

Returning to their roles as the Haynes sisters, Bodnar and Marilley dazzle. In particular, Marilley’s dancing skills and Bodnar’s combination of vocal prowess and comic timing are exquisite. Denver Center Theatre Company veteran Hartman makes for the perfect grizzled General, and his end-of-show speech brought tears to the eyes of many audience members. As the General’s concierge and sharp-tongued, right-hand woman, Dorothy Stanley steals more than a few scenes as well.

As much as the actors accomplish, another star of White Christmas is the costuming by David Kay Mickelsen. Using the original designs by Carrie Robbins as a base, Mickelsen’s wardrobe choices are nothing short of sumptuous. Each musical number and scene change brings forth another set of period-perfect, gorgeous outfits. His costuming choices not only reinforce the 1950s setting but also further define each character and fill the stage with holiday cheer.

Judging from Boulder’s most recent meteorological history, the odds of a white Christmas this year seem iffy at best. That’s all the more reason to take in a performance of White Christmas. But even if you don’t celebrate Christmas and would rather be in Hawaii than anywhere with even a chance of flurries, this show will undoubtedly put you in the holiday spirit.

The year of empty theaters