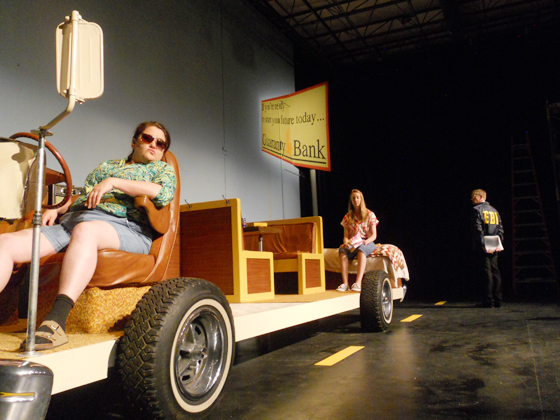 Most of what follows is true — the true story of a woman too big for her own life. Peggy Jo Tallas was mired in the post-women’s-liberation problem that faces so many women: If you didn’t grow up to be a wife and a mother, what did you grow up to be? And is it just a whole lot of nothing?

For years, law enforcement searched for this calm, collected, seemingly professional bank robber, but she’d always worn a beard, cowboy hat and sunglasses — they were searching for a man. That’s just a punch line in a much longer, funnier story that ends with more punch than you might expect in Peggy Jo and the Desolate Nothing, a collaboration by square product theatre and Buntport Theater Company.

Emily Harrison, founder of Boulder’s square product theatre and a general theatre powerhouse, knew the story of her fellow Texan, Peggy Jo Tallas, and approached Denver-based Buntport Theater Company with the threads of a story they could take to the stage.

The original, single-act, fulllength production that approaches Peggy’s story through the framework of the FBI agent trying to piece together the how and why. To help him out, he consults 20-years-worth of Peggy Jos: 40-something Peggy Jo by Harrison, two at or near 60-something Peggy Jos by Hannah Duggan and Erin Rollman, and one of her as “Cowboy Bob,” the bank robber disguise, played by Brian Colonna. Erik Edborg plays FBI Agent Steve Powell, who is both reading from and taking notes in his file about Ms. Tallas.

Nobody leaves the stage for the duration of the performance.

When they introduce Agent Steve to their tale, they have a cautionary note: Most of what follows is true. Because, as they say, showing is better than telling, he gets to witness her playing out her own life, even talking herself into her first bank robbery as the Peggy Jos huddle and assure one another they’ve got what it takes. As needed, they step into auxiliary roles: bank tellers, a fast-talking RV salesman, her deadbeat brother and their ailing mother.

“The story is true even if the telling of it is a little bit loosey-goosey,” Duggan’s version of Peggy Jo tells the FBI agent. She’s the most forthcoming of the Peggy Jos, caught in the middle of the other two, it seems, in a place that has her looking both forward and back and realizing how little we can tell of either place — where it was we came from that led us here and what exactly lies ahead.

We do know how she’s going to get there — because all great Buntport shows seem to involve a set piece with tires, there’s an RV on stage, built just to the floor and furniture without so much as a door or windshield. They do, however, have a sink, kitchen table and bed, and at the front, a steering wheel and a rear view mirror, all in a caramel brown and mustard yellow that recalls the ’70s. It’s always one Peggy Jo or another at the wheel.

A billboard that would be in the rearview mirror of the RV reads “If you’re ready to start your future today… Guaranty Bank” and becomes a device the script uses to give the Peggy Jos a chance to insert more commentary about the events than her generally reticent nature would allow — not to say that she’s not outspoken Just to say, she’s the kind of personality that uses boisterousness and bravado to obscure most chances for personal insights.

It’s a decidedly funny ride, punctuated with moments of physical comedy, absurdity and self-conscious humor. But it also reads a little bit like being invited to find someone else’s inside jokes funny when you’ve just hopped on board with a decidedly unreliable source. It’s tough to know whether audiences appear lukewarm on that plan because it’s like a panty-grab on the first date, or if, even when you get the joke, someone else’s inside jokes just have a hard time making it to the laugh-out-loud level of funny.

But. If you’re ready to go all in on the ride… Guaranty Bank.