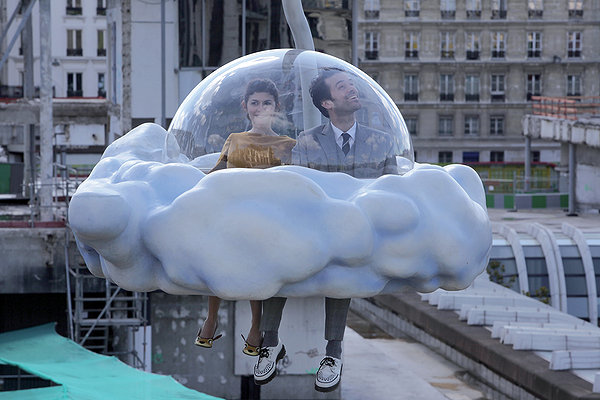 Mood Indigo, opening this Friday at the Landmark Chez Artiste in Denver, is the latest from French writer/director Michel Gondry, a crafter of handmade fairy tales and whimsical nightmares best known for his 2004 sci-fi break-up drama, Eternal Sunshine of the Spotless Mind.

Mood Indigo is a simple story of a boy and a girl.

The boy is Colin (Romain Duris), 30-something, single and independently wealthy. He lives in a fantastic apartment, practically pulsating with life. He lives with Nicholas (Omar Sy), his confidant and cook — who concocts nothing but elaborate and intricate meals — and a mouse that stays busy keeping the place clean. While Nicholas and the mouse handle the day-to-day, Colin spends his time and money inventing a “pianocktail” which manufactures elaborate cocktails based on the music the player chooses to play.

The girl is Chloé (Audrey Tautou), a Duke Ellington tune brought to life. Colin is smitten, but he doesn’t know what to do. Chloé is as innocent as they come and finds Colin’s bumbling adorable. They fall madly in love and marry, but while on their honeymoon, a water lily begins to grow in Chloé’s lung and she becomes ill. Desperate to heal her, Colin sacrifices his wealth, his friends and his lifestyle.

Gondry’s signature approach blends stop-motion animation, miniatures and in-camera special effects to create a cinematic world that exists adjacent to the real, reflecting the emotions of this world as the moon reflects the light of the sun. This created world feels livedin and meticulous, but not precious.

Unlike his contemporary, Wes Anderson, Gondry approaches his handmade world with reckless abandon, often delighting in the destruction of something that was lovingly created whole cloth. A reminder that life is serious business and even the quaintest moments can damage and scar. But in Mood Indigo, it’s not simply a sadistic streak on Gondry’s part, but the cinematic expression of the subject matter. When Colin and Chloé begin to fall in love, a cloud car appears and “lifts them up where they belong” high above the city of Paris while a saccharine pop song plays. Conversely, when Chloé falls ill, the walls around Colin literally close in on him. The cost of caring for Chloé drains Colin’s bank account and the color from the movie. Gondry isn’t one to let his characters off easy. If they are allowed to float upon the clouds of bliss, then they are cursed to suffer life’s sorrows as well.

Like the fairy tales of Hans Christian Anderson and the Brothers Grimm, Mood Indigo serves to illuminate a truth that lurks just beneath the surface: The joy of love validates all of life and the pain of love comes from the knowledge that someday, that love will be lost.

Unbelievably, Mood Indigo is not receiving the attention and distribution it, or a director of Gondry’s status, deserves. There will be no wide theatrical release and it is not yet available for rent or purchase online. Thankfully, Chez Artiste is giving Mood Indigo a one-week run starting August 1. Bring a loved one and some Duke Ellington, because Mood Indigo is worth the trip.