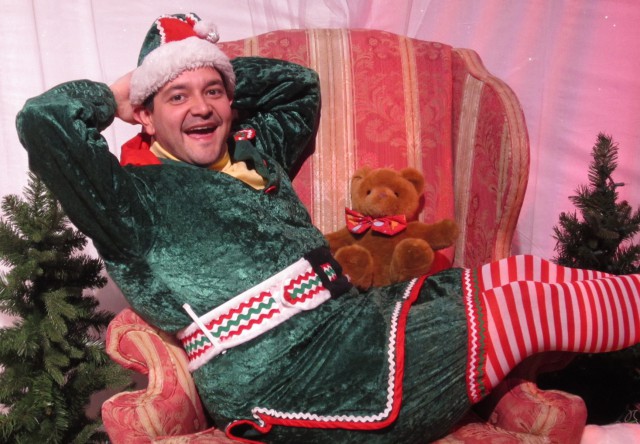 Remembering the spirit of Christmas can get difficult when parking lot road rage and wrestling over smartphones overtake Santa and good cheer. In reality, it may be time to take a deep breath and count your blessings. And what better way to let off steam than listening to the misery of others?

Twenty years ago David Sedaris wrote The Santaland Diaries, a chronicle of his time as a struggling actor in New York City forced to take a job as Santa’s elf at Macy’s Department Store. His cynical take on the franchise of Christmas has stood the test of time as an alternative to the gooey, religious fare that can hide the realities of everyday life.

Adapted by Boulder Ensemble Theater Company (BETC) for the stage as a one-man show, SantaLand 4.0 is essentially a series of short stories that gather together at the end. It tells the story of how Sedaris survived a season as Crumpet the Elf, herding thousands of people through a fabricated department-store-wonderland to visit Santa. Sedaris/Crumpet irreverently observes his surroundings and caustically judges others, all the while dressed in candy cane leggings.

“This is one of the few holiday pieces out there that gives people an alternative to the sort of ‘happy-happy-joy-joy’ or the 97th version of A Christmas Carol they’ve seen,” says Steven Weitz, producing ensemble director for BETC, which brings this year’s performance to the Dairy Center through Dec. 24. “I actually think its cathartic for people to be able to step outside of [the holiday madness] and laugh with it.”

The director posits that SantaLand resonates among audiences because it balances snark with some truth about why we put ourselves through so much trouble this time of year.

“I think what Sedaris is getting at with the piece are the absurdities of the season,” Weitz says. “It may be more relevant now than it was when it was written, as Christmas and the holidays have continued to grow into this massive industry that comes earlier and earlier every year.”

Matt Zambrano, a local actor getting his first crack at the role of Sedaris, had no performative text in which to create the character other than NPR recordings of the Diaries. A veteran of comedic acting and slam poetry, he spent time this fall in New York, retracing the steps of Sedaris a generation ago. Zambrano finds it fun to delve into a character who “believes he is smarter than everyone else around him.”

Zambrano has been working with Weitz and BETC to season the production, peppering in contemporary references and local flavor while honoring the truth of the original text.

“Reading [Sedaris’] text, a lot of his descriptions of what the world is like and what the people are like are entirely accurate, and I would venture to guess haven’t changed as much since the time that he wrote it,” Zambrano says.

Weitz sees a connection between the writer Sedaris and the Boulder community, one that Zambrano can exploit by bringing the audience along for the ride. By making viewers participants rather than merely observers, BETC is able to fire shots across the bow of good taste.

“We do spike things up,” says Weitz. “When you’re doing something comic like this, it’s important to know who your audience is, so we found a couple of places to make things Boulder- and Colorado-centric.”

So what is the over/under on Amendment 64 references?

“That was pretty low-hanging fruit,” Weitz admits before further explaining. “It’s more about finding little hooks that the audience can use to contextualize it for this place and time, as opposed to a more generic experience.”

For his part, Zambrano is curious to see how the intent of Sedaris comes across to Dairy Center audiences. Despite staying true to what Sedaris wrote, there are certain parts of the text that may be a tad offensive or off-color.

“I think a lot of people come expecting to see a Christmas show, you know, a light-hearted Grinch- Stole-Christmas sort of tale,” Zambrano says. “Come to find out, it’s more Bad Santa than anything else.”

That doesn’t mean the humor will fly over the heads of local theatergoers.

“Most people I’ve met in Boulder are smart and willing to accept sarcasm and the sort of irony [SantaLand Diaries] brings,” Zambrano says.

And if they come away angry or offended at something?

“If they do, then great,” Zambrano says. “It starts a dialogue and gets people talking about theater, and that’s never a bad thing.”