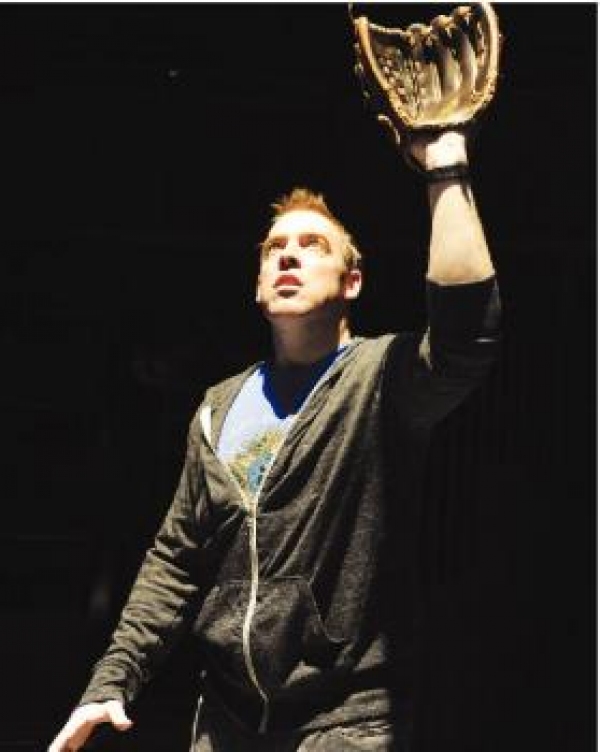 As both a theatre lover and sports fan, I was thrilled when I first learned that the Denver Center Theatre Company was presenting the world premier of a play revolving around baseball. Though I was unfamiliar with playwright Ken Weitzman’s other works, which include The As If Body Loop and Arrangements, the description of The Catch immediately piqued my interest. A down-on-his-luck businessman decides to turn his life around by catching — then selling — the home run record-breaking ball.

Perhaps it was my sorrow at the advent of yet another Dark Time, the time between the end of one NFL season and the beginning of the next, or maybe it was the euphoria of knowing that pitchers and catchers were reporting to spring training, but it felt a little like opening day when I entered the mini-stadium-like confines of the Space Theatre to see The Catch. Apparently, I was not alone in my anticipation of another MLB season, for I saw not one but two different people sporting actual baseball jerseys in the “stands” that night. In hindsight, I’m a little surprised no one brought his or her mitt.

While it is certainly not the only — or even the first — play ever written about baseball, more than any other such production I have seen, The Catch balances the artistic and the athletic outstandingly. All the characters present as real, flesh and blood human beings rather than theatrical constructs. The protagonist, Gary Zipnik (Ian Merrill Peakes), has watched his dot-com business go belly up and his marriage disintegrate. Despite these rather significant setbacks, he maintains an indefatigable optimism, but rather than turning into a one-dimensional Pollyanna, Gary remains conflicted and scared despite being hopeful that everything will work out in the end.

Gary’s father, Sid (Mike Hartman), is a sweettoothed diabetic visiting kooky California from stolid Chicago. A gruff, no-nonsense man, Sid is equally genuine when he berates Gary for his pie-in-the-sky plan and, later, when he throws all of his support behind the effort. Though afforded less stage time, Gary’s rival for the record-breaking baseball, Michael Nomura (Pun Bandhu), and Michael’s mother, Ruth (Wai-Ching Ho), are also fully realized. With just a few exchanges, the depth and breadth of their relationship is made abundantly clear. The baseball player poised to deliver the epic dinger, Darryl Love (Nicoye Banks), swaggers like a superstar, while providing essential commentary on the ever-evolving nature of America’s pastime.

Credit Weitzman with creating these exceedingly plausible characters and giving them credible things to do and say, but Mr. Weitzman’s world premier benefits immeasurably from the acting talent involved. Denver Center Theatre Company veteran Hartman kills it as Sid Zipnik. He has the entire audience reeling with laughter time and time again.

Peakes gives us a Gary full of manic energy and driven by an unstated but undeniable fear of failure. Bandhu plays Michael with the reserve required by the part, and as his mother, Ho steals nearly every one of her few scenes. As Love, Banks exudes movie star charisma while tackling a deceivingly complicated role.

Of the major American sports, I would argue that baseball remains the purest. After all, it is the only sport without a clock and that cannot end in a tie. Baseball games take as long as they take, and they are played until one team wins. As pure as baseball is, it is not immune to scandal, as both gambling and steroids have proven in the past. Baseball, like the lucky few who play it professionally and the countless many who follow it avidly each season, is a unique, flawed, brilliant thing, and in that it shares a great deal with The Catch.