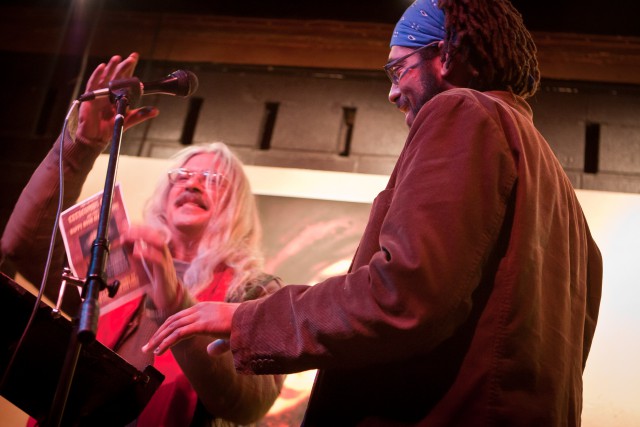 Boulderites have long enjoyed the opportunity to step out during their evenings and indulge in a bevy of free, live performances that invite neighborhood amateurs to express themselves creatively.

Conor O’Neill’s regularly offers an open mic on Tuesday nights, Catacombs hosts one on Thursday nights, and a new weekly poetry reading is currently in the works at Tonic, with similar showcases offered throughout the year at the No-Name Bar on the Hill, the Boulder Bookstore and on the CU campus.

Perhaps due to the common statement that there “tends not to be anything else happening that night,” Monday has become the hot night for open mics of all formats downtown.

During football season, Johnny’s Cigar Bar puts on a heady 21-and-up open mic to accompany spirits and smokes, whereas Trident Booksellers and Café runs combinations of outdoor jam sessions, poetry readings and other open amateur events on their back patio stage during the warmer months.

It’s also on Monday nights that longtime Boulder habitué Tom Peters — owner of Pearl Street’s Beat Bookshop — hosts the multi-awardwinning “So, You’re a Poet” series. The series remains the longest-running poetry reading of its kind in our community.

It was November 1987 when Peters, dissatisfied with what he thought was a lack of amateur poetry readings in the state of Colorado, decided Boulder deserved to join the literary ranks of larger cities such as San Francisco, New York and Los Angeles. His dream was to create a series of readings in which anyone could read, alongside local luminaries such as Allen Ginsberg and Amiri Baraka.

“When I started, poetry
readings were not a part of the culture,” says Peters, noting that back
in the 1980s, there were no Slam Poetry Competitions, no Def Poetry Jam,
and the likes of Jack Kerouac’s landmark Big Sur was all but forgotten.

“There
were famous poets reading at CU or Naropa, but there was no place for
amateurs to read their works,” he says. “That’s why I felt it was
important to start my series.”

Peters also says the weekly readings he hosts are an outlet for his own creativity as well.

“I
try to do it all, to be involved in what I love,” Peters says. “And I
wanted to have a place where people can be exposed to the things I’m
interested in.”

Series
regular Eric Medema is one of a handful of amateur and professional
poets who have been coming to Peters’ weekly series for years.

“Reading poetry has helped me find my own voice,” says Medema.

He
notes that after a traumatic brain injury he incurred some years back,
coming to the Goat to read his poetry every week “helps to further
facilitate the healing of my brain by speaking my mind without having to
stay in a box like most public places will have you do.

“I owe Tom a lot for letting me come here to read my poetry,” Medema says. “[The Goat’s] a venue to get it out of your head, put it on paper, and speak it. To share your story more intimately.”

Though
Peters says he feels no sense of competition with the other readings
and open mics that have come and gone over the years, he says that “none
of the others have drawn the consistent number of people” as his “So,
You’re a Poet” series.

But, the times — as a famed troubadour once sang — they are a-changin’.

Enter The Cup Espresso Cafe, only a few doors down from Peters’ Monday night readings at the Goat.

Still
in her early 20s, Mary Jarchow, formerly of Steamboat, worked
tirelessly as a barista at the Cup for a year after graduating from the
prestigious Berklee College of Music with a specialty in flute. Before
leaving to continue her professional interest in music as the operations
manager for the Dairy Center’s Parlando School for the Arts last
August, Jarchow was able to convince Cup owners to allow some coworkers
and her to perform as part of the café’s third anniversary celebration.

According
to Jarchow, the owners saw how presenting live music brought in
customers, and they let her start her own weekly open mic on Monday
nights.

“[Open mic night] helps develop a community
for musicians to come back and bring their friends. We definitely seem
to attract some really great performers,” Jarchow says.

Of
course, there might also be an attraction to the Cup’s offer of a free
drink for performers and a raffle in which those who stay through the
entire showcase can win prizes.

Marc
Perreault, a musician and Broomfield Academy teacher, moved from Rhode
Island to Boulder this past August, seeking a new experience. Perreault
has found what he’s been looking for at the Cup’s open mic, where he
plays his “pop folk” music and has found a new community of steadfast
performers.

“The
scene out here is so alive, and it’s a great way to meet people,” says
Perreault, who says he met most of his new friends in town at the Cup’s
open mic and that he now plays with many outside of the Cup on a regular
basis.

“We’re a
kind of family. More like a collective than a band,” Perreault says.
“Mary’s been really great and makes us all feel so comfortable night
after night.”

“In
the beginning, it was slow,” Jarchow says, recalling the first Cup open
mics at which as few as two or three performers would show up. “But
then, almost
immediately after Memorial Day last year, people started coming more
and more. Basically, we’re full every other Monday night now. Sometimes I
have to turn people away because we already have a full line-up five
minutes into the show.”

During
those early first open mics, the Cup offered performers the chance to
read poems or tell jokes, in addition to playing music. These days, now
that the scene has become such a popular event for amateur artists,
Jarchow has been forced to admit musicians only, particularly after the
Cup’s owners told her there were to be no more poets.

“The decision was made,” Jarchow says, “and there was no discussion.”

Due
to this lack of poetry — and the fact that her open mic starts at 7
p.m. to the Goat’s 8:30 p.m. start — Jarchow, like Peters, feels no
sense of competition.

Despite
the fact that both weekly events take place on Monday night at
competing coffee shops so close to one another, Jarchow’s sense is that
it’s not a direct rivalry.

“If
this were New York City, every third shop would have something,” she
says. “The question is, ‘Why would someone start an open mic?’ My
intention is not to compete, but to have people perform and develop as
part of the community. We’re filling a niche.”