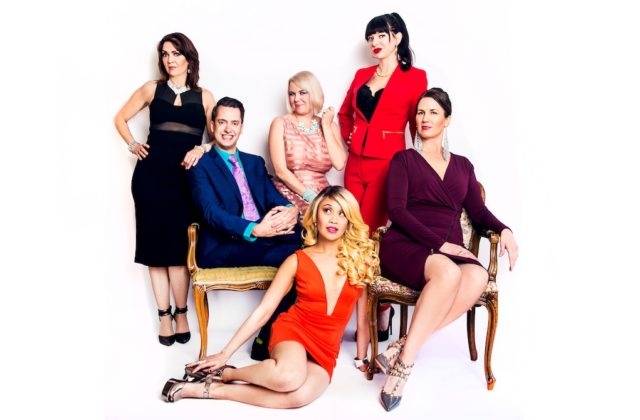 Is the idea of a reality TV parody an inherent redundancy? Whether it’s The Real World, Duck Dynasty, The Jersey Shore or Here Comes Honey Boo Boo, the most popular reality TV shows exist in a dusky twilight of pandering self-awareness. Everyone knows that these shrieking weekly train wrecks are carefully scripted, hyper-managed and stylized to within an inch of their lives, but the shows’ producers and participants enter into an unwritten, unspoken covenant with their audiences that viewers will crank their suspension of disbelief up to 11, sit back and enjoy the intelligence-pummeling, life-disaffirming ride.

The lines of demarcation are clear when one parodies a dramatic thriller — as Silence! The Musical does with the film The Silence of the Lambs. When parodying a reality TV show, however, as The Realish Housewives of Cherry Creek does with The Real Housewives of X (where X equals any number of locales including, but not limited to, Orange County, Atlanta, Beverly Hills and Miami), the line between the campy, trashy source material and the resulting parody is so tissue-paper-thin it is sometimes nonexistent.

Having already skewered socialite stereotypes in so many other geographies, it’s no wonder that The Realish Housewives of Cherry Creek is as polished as a trophy wife’s 4-carat diamond ring. Director Eric Hoff and his creative team understand the idiom of reality TV and play with its conventions like puppet masters. The bombastic musical cues — featuring de rigueur violin stings to accompany every faux dramatic revelation — are spot on. The frequent “confessional” moments are created by spotlighting the confessor while dimming everyone else. Kudos to Sound Designer Katharine Horowitz and Lighting Designer John Kelly.

All five women dive deep into their shallow characters, but Pearlman and Gavino earn the highest scores. With the most grounded and dynamic performance, Pearlman exudes confidence as Brooke. She also bears more than a passing resemblance to another comedic powerhouse, Hannah Simone, who plays Cece on New Girl. As the cartoonish Desiree, Gavino has the most challenging part to play, and with her helium-voiced delivery and winking dunderheadedness, she’s dingbat-tastic.

Many reality TV shows feature a “reunion show” that, at the end of the season, brings the cast together to reminisce and dish previously undished dirt. The Realish Housewives of Cherry Creek uses the reunion show as its framing device with Randy Bowen (Jackson Evans) acting as host. Evans more than holds his own with the talented ladies on stage. He jumps from character to character as needed throughout the show, and each is funnier than the last. As the host/creator of the play’s version of the TV show, Evans also gets some of the choicest lines lampooning the realites of reality TV.

The Garner Galleria Theatre at the Denver Center is the perfect venue for a show like this. The cocktail service means the audience can join the housewives in a glass of wine or martini, and the cabaret seating makes the instances of improvised audience interaction easy for the cast.

Whether you think reality TV like The Real Housewives is abhorrent or awesome, a fucking freak show or fabulous fun, you’ll find something to like and laugh at in The Realish Housewives of Cherry Creek. It’ll make for a great girls’ night, date night or reality TV hate night.