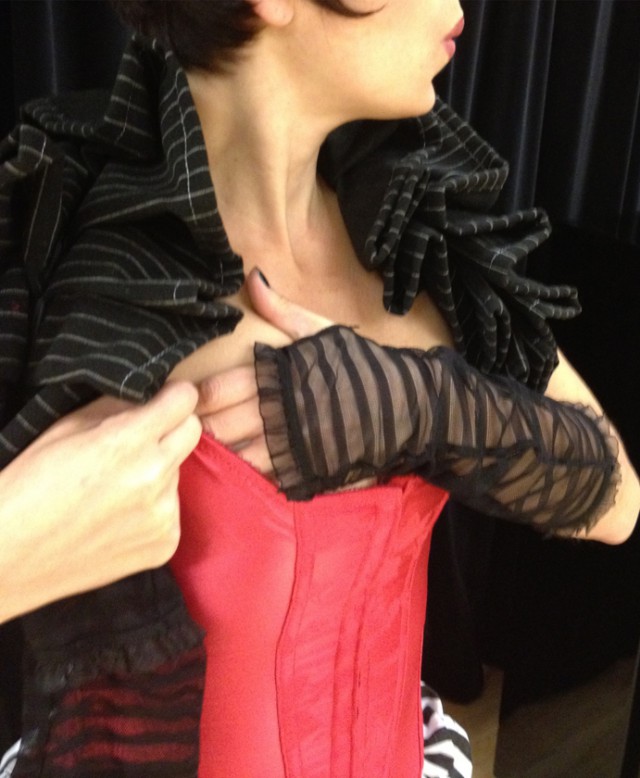 If you’re having a hard time this holiday season doling out your entertainment dollars, kill three birds with one stone. By catching a local performance of the holiday musical Moulin Scrooge, fans of comedic acting, over-the-top Jukebox musicals and old flaccid Dickens can drink in the splendor of their thrifty ways.

Meridith Crosley Grundei directs Moulin Scrooge. A veteran of numerous stage companies, the Boulder resident was a member of the Chicago musical improv group Baby Wants Candy, which was founded by Scrooge creator Peter Gwinn. As a member of famed The Second City Touring Group and teacher at the Upright Citizens Brigade, former Colbert Report writer Gwinn imbues Scrooge with the hallmarks of improvisational performance fleshed into a scripted production. The entire concept came out of a Baby Wants Candy performance more than 10 years ago.

Gwinn took the Baz Luhrmann-directed Moulin Rouge! and mashed it up with Dickens’ A Christmas Carol, illuminating the stage with seedy late-19thcentury characters, contemporary pop music and humor that is strictly adult-only.

In this musical story, Ebenezer Scrooge runs the cabaret, and his star courtesan Satine forges a budding romance with the overworked Bob Cratchit. Three of the cabaret chorus members are ghosts who come to visit Scrooge, including the Ghost of the Past, who left another of the performers, Frau Frau, at the altar in a previous life. The absurd comedic duet reminiscing about past love is augmented by the fact that Frau Frau is played in drag by Jim Walker.

Cratchit is not a family man in this production, yet his kin come to life in other ways. Instead of Tiny Tim, Joan Bruemmer gives a raucous turn as Tiny Kim, a disabled woman who only wants to dance.

“There are definitely a couple of things that might put people on edge, but my hope is that they’ll be able to laugh at the things that make us uncomfortable as a form of relief,” Grundei says.

Grundei did choreography for the first scripted production of Moulin Scrooge at the 2006 Improv Olympics in Chicago, and felt it was something to introduce to Colorado theatergoers besides the same old Christmas shows that get done again and again.

“I remember being backstage and just laughing, no matter how many times I saw it,” Grundei says. “I just thought, ‘Why not direct it here?’” Musical Director Craig Schwartz imbues the show with a range of send-ups, from covering a Ke$ha song to some surprising Elton John moments. A cabaret trapeze somehow makes its way into the mix.

The story does all play together in the end, where each cast member declares what they have learned from the experience.

“It’s a comedic version of what moral lessons are learned,” Grundei says. “It’s all very humorous moral endings that you might raise an eyebrow at if you heard it at the grocery store.”

Local theater companies Band of Toughs and WreckingBall Theater Lab, which have some overlapping members, joined forces for the production. Despite its intimidating name, Band of Toughs relies on audience participation to fulfill its stated mission of creating work that “puts the ass back in passion — and then kicks it!” WreckingBall Theater Lab echoes the burly sentiment by trumpeting that it has been “demolishing the norm since 2008.”

The nine cast members are local improv performers and actors, who under the direction of Grundei and the choreography of Colleen Mylott have been rehearsing since October. Finding the right mix becomes crucial when telling a story dependent on delivery.

As far as finding the right cast, Grundei says it’s about “people that are really at ease with comedy. That’s harder to find than good actors. And if you find really good actors who have comedic timing, then that’s golden.”

Moulin Scrooge will play Boulder’s Wesley Chapel Nov. 29-30 at 8 p.m. and Dec. 1 at 7:30 p.m. and 9:30 p.m. The production will move to the Buntport Theatre in Denver for weekend performances throughout December. For tickets, see bit.ly/bandoftoughs.