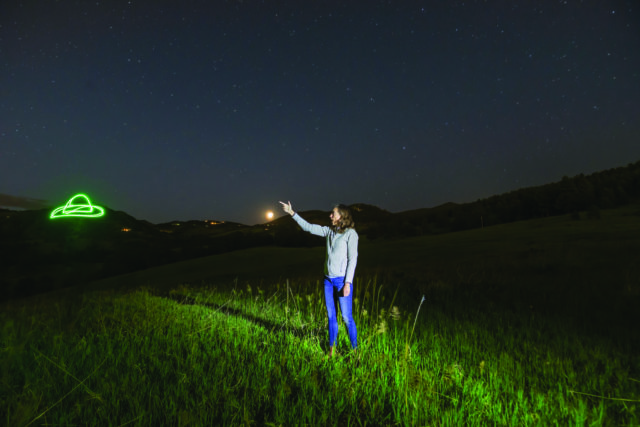 While journalist Laura Krantz was busy reporting on Bigfoot three years ago for the first season of her podcast Wild Thing, something weird happened — but not in the Canadian forests where she was searching for Sasquatch.

Thousands of miles away, in an observatory in Maui, scientists reported seeing an object from another solar system enter our own for the first time. They dubbed it ‘Oumuamua, Hawaiian for “a messenger from afar arriving first.” With its unusual elongated shape — unlike any comet or asteroid seen before — ‘Oumuamua was truly from another world. Even tenured professors, like Avi Loeb, of Harvard University, wondered: Was this merely a piece of space bric-a-brac, or a sign of extraterrestrial life?

Krantz, a former Ted Scripps Fellow in Environmental Journalism at CU Boulder, saw the connection between Bigfoot and E.T. — a human “desire to seek things out and try to find answers, even if we know the questions might not be answerable.” For season two of Wild Thing, out on all streaming platforms now, Krantz leaves the forests of the Pacific Northwest and sets out on a journey to learn more about the search for extraterrestrial life and why it captures our collective imagination.

“The feeling I got researching Bigfoot is that people love the idea that the world is still wild enough and unexplored enough that something like this could exist out there and that we could be the ones to find it,” Krantz says. “I think there is something very scary about the idea that the world is already so explored and mapped and paved and discovered that there’s nothing left for anyone to find. … Likewise, I think with space, there’s something very similar there, it’s this desire to know what’s out there and to explore it.”

She calls season two a “survey course in the search for extraterrestrial life.” Across 10 episodes she travels to Georgia Tech to speak to faculty in its renowned astrobiology department; to NASA to learn about the origins of life here on Earth and how that informs our search for life in the cosmos; to the SETI Institute in California, where researchers at the Carl Sagan Center have been devoted to the search for alien life for more than 30 years; and yes, Krantz heads to Roswell, New Mexico’s, famed UFO Festival “to talk to people who really do think that in 1947 something crashed into the desert and it was piloted by extraterrestrial life — and the government has been covering it up ever since.”

“Thirty percent of Americans believe that extraterrestrial life has visited earth,” Krantz says, “and I don’t think you can have a conversation about these topics without addressing that side of things.”

At SETI, Krantz speaks to scientists about lightsails, a still-developing technology that can propel spacecraft using pressure from solar radiation. When ‘Oumuamua came to visit, many wondered if lightsails had carried it across the vast expanse of space. While it doesn’t look like that’s the case for ‘Oumuamua, it’s not far off for us Earthlings.

“This sort of cutting-edge technology and science, we’ll be doing things in 20 years that we would’ve probably just chalked up to really well-written science fiction at one point,” Krantz says.

“In doing this research I realized how much closer we are to potentially finding something,” she says. “I do think that the possibility of finding microbial life is much more likely than I’ve realized; this is something that could happen in our lifetime, in our solar system. And that’s really cool, because once you find another example of it, then you just have a whole new set of questions.”