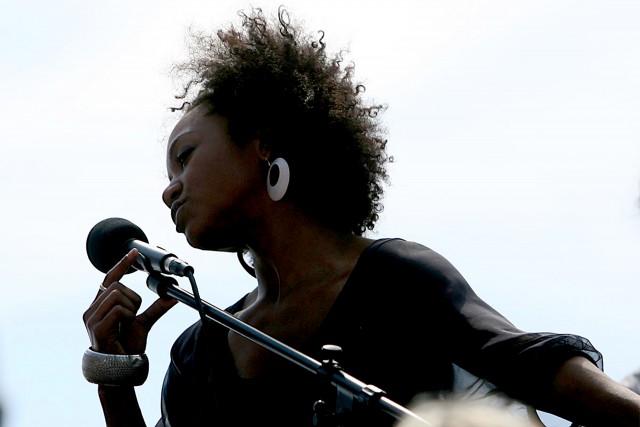 — “You have many people who were on ‘American Idol’ just going back to
their normal lives after the show, and not doing music anymore,”
observes , an “Idol” contestant who came in third on the TV talent-show phenom in 2008.

“Then you have people who go on to do a lot of things — , hit records, movies.”

Mercado is angling for the latter category by signing on to a glitzy U.S. tour of the musical “Dreamgirls,” which opens a stand on Tuesday.

Mercado plays Deena, a member of a Supremes-like
1960s girl group, The Dreamettes. And her first performances in the
role occurred late last year at Harlem’s legendary Apollo Theatre —
where many stars got their first break, and the patrons are famously
rowdy.

“It was a little nerve-wracking,” Mercado admits by phone from her
home. “This was my first big thing, and the audience was hilarious.
There’s a line in the show where I tell Curtis, Deena’s husband, ‘It’s
over.’ And the crowd would just go nuts and shout things — like, ‘Girl,
you better leave that boy!’ “

“Idol” devotees will recall that Mercado, a svelte,
striking young woman of Puerto Rican and Bahamian heritage, finished
third in a hard-fought “Idol” season that ended with rocker and tween-dream runner-up triumphing.

But while she took some lumps from judges and
viewers for being too bland and “too cabaret,” Mercado emerged as a
tough competitor with a pliable voice, some diva glamour and the kind
of stage flair that’s scarce on this year’s “Idol.”

Also apparent: Mercado’s self-confidence, honed in
many youth talent contests and a lot of training. At her best, she
torched up the small screen with sizzling renditions of “Fever” and
“One Rock ‘n’ Roll Too Many” that brought down the house.

“I had a background in musical and ‘straight’
theater,” says the poised, articulate performer, now 23. “I studied all
kinds of dance — jazz, tap, ballet, modern, Fosse. I studied theater in
college in .”

That foundation helped her nab the role of Deena (played by in the “Dreamgirls” film, opposite “Idol” alum ).

Thanks to the movie, the stage role of Deena has been expanded for the tour. “Listen,” ‘s dramatic solo number, shows up as a duet for Deena and Effie (played by ), the Dreamettes member who gets shunted aside as Deena’s star rises.

“‘Listen’ is a great addition to the score,” Mercado
suggests. “Some people who are hooked on the original music don’t want
it in there, but I think it really adds something special.”

Mercado is so busy with the grueling tour regimen,
she’s barely tuned in to the current “Idol” season. But she did have an
early favorite.

“I think that is very
talented. He knows a lot of our cast, and I was really supporting him.
He has a performance quality that’s exciting to watch. He got voted
off, but I still think he’ll go far.”

As for the judges’ constant carping about song
choice this year, Mercado is sympathetic to the contestants. She was,
after all, saddled with one of the worst judges-choice songs ever: “Hit
Me Up,” from the animated film “Happy Feet.”

“There are so many rules, regulations, so much with
choosing songs that the public doesn’t know about,” she reveals. “Often
the available songs are ones you don’t want to sing, and you have to
compromise. I’d download my song, close my eyes, visualize the words
and try to relate to them.”

Mercado appreciates the big career boost from “Idol.” And she’s still friends with such fellow contestants as and Archuleta, who came to see her in “Dreamgirls” in L.A.

Her next goal is one that many “Idol” vets have found hard to reach: becoming a recording star.

Says Mercado, “I spend time when I can in the
studio, writing songs, working on my first record with some really
stand-out artists and producers — like , and and , two of the writers of ‘Listen.’ “

She doesn’t have a recording label yet, but Mercado is patient.

“I know sometimes it takes years to break into the
music industry. And after ‘Idol,’ everyone is expecting you to do
something extremely big. But for me, right now? I’m doing exactly what
makes me happy.”

Visit The Seattle Times Extra on the World Wide Web at http://www.seattletimes.com/