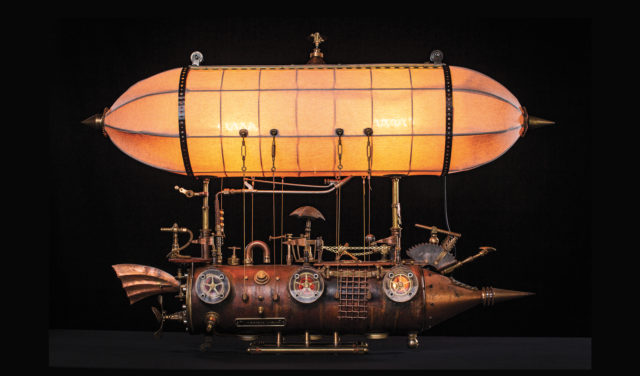 Art runs thick in the Levin family blood. Mitch and Susie have been crafting, creating and designing their entire lives, professionally and personally, first in Chicago, then here in Boulder since 2013. They nurtured and encouraged that same creative capacity in their daughter, Madison, who helped her parents work art booths at festivals and fairs, listening and learning from her parents’ creative processes, developing her own style and building an art business of her own. And within their son, who became an architect and now lives near Breckenridge.

“Both of us as young [artists] were very supported by our parents,” Mitch says. His own parents had supported him in his decision to go to the School of the Art Institute of Chicago. Susie’s parents encouraged her as a little girl to draw on the walls of their basement, painting murals that would stay there for more than 20 years.

“We’ve tried to do the same thing with [our daughter] Madi,” Mitch says. “I think it’s really important for parents to nurture and support that.”

Today the three independently successful artists share a studio and gallery space together at East Boulder’s Studio 5.5. It’s where their distinct styles confluence, enhancing one another’s work, contrasting each other and, of course, exchanging inspiration and influence.

“One thing that we all like is change,” Susie says. “And I swear every week we evolve slightly.”

Their evolving ideas, methods and styles couldn’t be more different, though. Susie often draws detailed sketches of her ideas first, refining them on paper before seeking out the perfect pieces of wood, the right textures and the color palette to bring it to three-dimensional abstract life. Mitch, by comparison, flies by the seat of his pants, constantly collecting widgets and knicknacks, turning ideas and plans over in his mind, tinkering and cross-assembling different found objects and old machines over time, churning them in his mind before they eventually emerge in their final form.

Funny enough, Madison says her approach lands somewhere between her parents’. But the thread stitching them all together is their appreciation for upcycled, recycled and found art of all forms.

“We find beauty in things that other people might look at and think, ‘That’s a piece of junk,’” Madison says. “We’re like, ‘No, I think that’s beautiful. That’s something to me.’”

Naturally, Madison Levin’s inventory of upcycled fashion says a lot about the artist herself: All her pieces are made from repurposed textiles or clothing she’s come across in her frequent thrifting adventures and enhanced with her distinct theatrical panache. She says her designs are heavily influenced by her background in acting, with almost costume-like qualities.

“I’m such an old soul, creating these timeless pieces is a really big part of who I am … it’s a combination of putting a lot of passion and emotion and that element of fun into [creating] clothes,” Madison says. “When you put on a piece of clothing you’re going to wear for the day, that really feels like you. I just love that. You feel really comfortable in your own skin.”

Madison graduated from CU and moved to New York City before the Boulder bubble drew her back in 2018. Since then she’s been working as an artist, mixing and matching fabrics, sewing clothes and conjuring up designs in the loft she shares at Studio 5.5 with her mother, Susie. Their space, attached to the Levin family gallery (but separate from the noise, dust and hustle-bustle of Mitch’s high-voltage makerspace) is a neat and comfortable refuge for Madison to stitch her magic, turning out wildly unique apparel.

Fashion isn’t Madison’s only artistic passion, though. Growing up surrounded by art, she says she’s drawn to creative expression in all forms: She’s an illustrator with a Tim Burton-esque flair for character creation and costume design; she collects antique items that she also sells on her online store, The Cobbled Street, that match her vintage aesthetic; she makes her own jewelry from found items, writes poetry, has an interest in interior design and is even writing her own novel.

What does she do when she isn’t toiling away in her studio space, engaged in some creative pursuit?

It’s a hobby not so unlike her father’s obsession for hunting down found-art-parts at Resource Central—and it fuels her with the same kind of upcycle inspiration.

Susie Levin was 5 years old when she picked up her first paint brush. That early introduction led to a lifetime love of art that she’s never let go of.

Before becoming a full-time studio artist, Susie was an art director in print. When she met Mitch, he was an art director in television. But when the two creatives came crashing together, her pursuit of art took on a whole new, more abstract form. They inspired each other and pushed each other, and by the mid-’90s, she says they’d both transitioned out of their “real-jobs” and were pursuing their passions: running a successful art business and raising their two kids in Chicago.

“We started doing art fairs and everything just took off,” Susie says. They sold art at some of the biggest art fairs across the country, their daughter Madison helping them along the way, learning the business side of selling art, as well as the business of making it.

Susie’s work has evolved a lot since those early days and it’s evolving still, she says. But she’s undoubtedly honed in on her specific style of abstract art: painting wood panels with carved elements, unique brushed textures, acrylic and latex. Each of her original pieces is designed almost architecturally, Susie says; and she’s never made the same piece twice.

“I’m not like your usual abstract artist that just wings it. I preplan,” Susie says. It’s a habit from her past as a graphic designer. Before starting on any piece, she does very tight, very detailed illustrations of her vision. Then she “puts her order in with Mitch,” she explains; and he’ll find exactly the right sized and shaped pieces of wood, panels or other materials the next time he goes to Resource Central.

“I work directly on the wood panels now. I don’t work on canvas anymore for my abstracts,” Susie says. She likes sanding and layering the paint, working “loose” on the raw wood. It’s taught her to embrace imperfections and be more accepting of mistakes.

Even for Susie, who’s abstract pieces are thoroughly blueprinted ahead of time, there’s an element of spontaneity and a sprinkle of whimsy that works its way into her art. Which she says is essential to how she and her family continue to grow.

“Our family very much believes in always evolving your work,” she says. “Never stay static and do the same thing. We all are really good at that.”

“I have to show you this, check it out,” Mitch Levin says, walking briskly across the Studio 5.5 makerspace, past the band saw and the drill press, around a table filled with power tools, to a large, extremely detailed, copper zeppelin airship prominently displayed on a long table. “This is a 1970 espresso machine three burner. I had this idea a year-and-a-half ago, to turn this into a steampunk airship.”

He shows me how he’s motorized the ship with a spinning rotor blade in back, how it lights up from within the espresso machine and illuminates from within its linen balloon that would presumably hold it aloft. He points out a small metal orb onto which he painstakingly soldered a tiny world map “for the pilot to navigate with,” and indicates the captain’s spyglass beside it.

“And what if he happens to blow up?” Mitch asks, not waiting for an answer before picking up a smaller steampunk ship. “He hovers over the water and then he has this little submarine.”

It’s a wildly detailed kinetic sculpture, made completely from found and recycled objects that Mitch says he’s been collecting for years. This is his latest big project, a perfect example of the kind of art that Mitch has carved out a name for himself with, and a glimpse into how the man’s imaginative mind works. Every single element of this ship, no matter how small or unassuming, has a story and a reason for being there—it all means something, and the longer you look, the more meaning it takes on.

“I like to look at all these things and then gather them in my head and then not look at them for a while, and let them go through in this spaghetti sauce in my mind and come out whatever way it comes out,” Mitch explains. He’ll spend uncounted hours collecting parts for his pieces at Resource Central or elsewhere, coming up with ideas for how to improve or evolve them along the way.

“That’s how I’ve always worked with my pieces,” he says. And more often than not, the end result is something that’s as bright, thoughtful and electric as the artist himself.

In a lot of senses, Studio 5.5 is just another one of Mitch’s eclectic artworks. He shares the gallery space with Susie and Madison, who have their own private studio space above it. But the space where Mitch works is the artist collective side of Studio 5.5—where a rotating cast of wood-workers, ceramicists, luthiers, porcelain artists, welders, jewelers and more rent work spaces from Mitch and all practice their crafts alongside each other. At any one time when you walk into Mitch’s studio you might see him welding a steel sugar skull, while another artist paints fired clay jars, beside another making furniture, and another crafting knives and daggers.

It’s a collection of artists and artisans assembled very much in the style of Mitch Levin’s sculptures and signs. And for Mitch, it’s a self-sustaining source of inspiration and influence.

“We all work in the same studio space, and even though we work independently there’s crossover there,” Mitch says. In his eyes, artistic influence is constantly happening, both consciously and subconsciously, for everyone. “Walk by anyone in this space, and even if you don’t engage them, you’re going to be influenced by what they’re working on … We get inspired and we get influenced by art. That’s what artists do.”