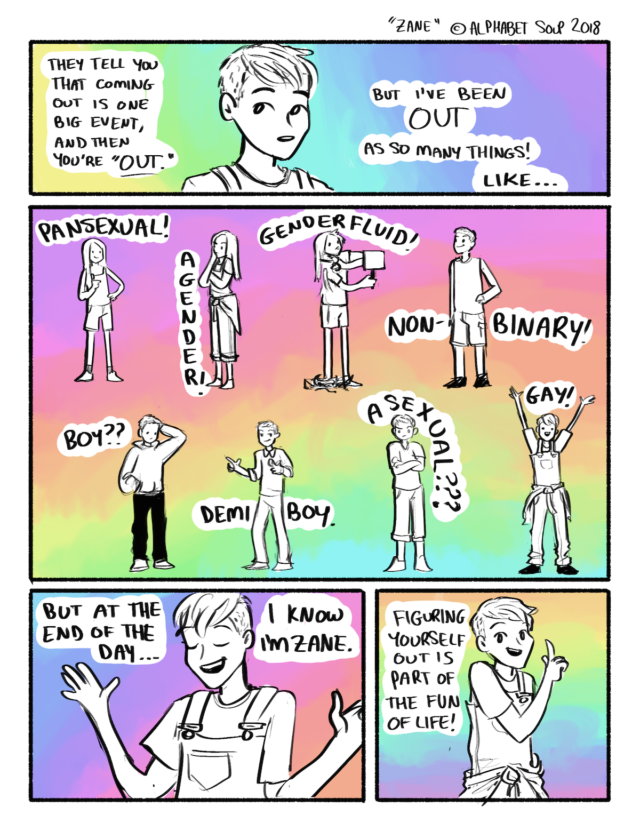 The opportunity to see a relatable story in popular media is a priceless experience for a young person. The path of self-discovery can be turbulent enough, but it can become especially confusing when sexuality or gender identity starts to veer from the heteronormative. With a lack of representation in the media, queer kids can struggle to find their identity.

That was the case for artist Emma Oosterhous, who says her high school years were “rocky” as she came to understand her sexuality.

“I lived in a bubble. I went to a pretty conservative school, I didn’t know what it meant to be gay or queer or trans until my sophomore year of high school. That is crazy in retrospect because looking back at my childhood I think, ‘Obviously you’re such a huge lesbian!’” she says with a laugh. “I just didn’t know or have the vocabulary to figure it out for myself. I didn’t have anyone else that I could look at and go, ‘Oh this is a person like me. Maybe that’s what all these things mean, that I’m a queer person.’”

Around her mid-high school years, Oosterhous remembers the first time she came across a lesbian protagonist in a book she found in the library.

“Even having that one shred of representation was life-changing for me,” she says. “And I can only imagine how much easier it would have been if there was more than that.”

Oosterhous hopes the next generation of queer youth doesn’t have to settle for scraps, which is one of the motivations behind her web comic Alphabet Soup. Found on Tumblr, Alphabet Soup has a simple description, “A comic about YOU.” Oosterhous illustrates various submissions she gets from readers telling their own stories. The comics deal with questioning, coming out and dealing with the positive or negative aftermath of doing so.

The comics depict many familiar moments and feelings from adolescence — spin the bottle, first love, self-doubt, embarrassment, loneliness, anxiety and more. Oosterhous has gotten submissions from around the world, from Iceland to Saudi Arabia. She’s drawn stories submitted by her best friend and even her childhood violin teacher who wanted Oosterhous to make a comic illustrating her acceptance of her trans granddaughter.

Oosterhous has been drawing Alphabet Soup for the past three years, a product of a college internship at the Colorado Springs nonprofit Inside Out Youth Services. When tasked with coming up with a project, she wanted a way for kids to feel represented. Oosterhous thought about creating a web comic where she could tell their stories and actively engage her audience.

“[Representation] lets us see ourselves as people. People who fall into the majority demographic, people who are straight, white, cisgender, etc. — they get to see themselves in the media all the time. They don’t have this gap where they don’t recognize themselves as a part of normal society. But for queer people, there is sort of a void there,” she says. “So having more stories about people from marginalized communities is so, so important because it normalizes the idea that we are worth something not only to ourselves but to people in the majority demographic. They need to see stories about us as much as we do.”

Oosterhous has illustrated close to 150 comic panels. Over the years, she has also drawn snippets from her own past like her own coming out story. In a strip entitled “Take it From Me,” Oosterhous explains how she was pressured by a girlfriend to rush her own journey.

“I would have figured it out eventually. I wasn’t allowed that time and space,” Oosterhous says. “I wrestled with my sexuality for a long time, and I felt this crushing pressure to know who was I was when I was 16, which didn’t happen. Eventually I gave in.”

Telling this part of her story allowed Oosterhous to reassure other people it is not how the process should happen. With more than 65,000 notes, this post is her most popular.

“Unfortunately a lot of people have the same experience,” she says. “I got a lot of comments like, ‘This exact same thing happened to me and I thought it was normal. Thank you for telling me that that’s not how it should have been.’”

Oosterhous relates to many submissions she receives, but some stories also reinforce how privileged she was to have a support system of understanding friends and family. She’s received submissions from people who’ve suffered abuse, been kicked out of their houses, struggled with self-harm and more.

“It makes me realize how lucky I am, and how I really need to do everything I can to help other people in my community,” she says.

Despite some of the heavier topics covered in Alphabet Soup, most of the stories are depicted lightheartedly. Oosterhous use this tone to target her work toward a younger readership, mainly those in middle and high school. She wants to provide a younger generation a safe outlet to explore their identity.

“It sucks so much that a lot of gay and queer media is labeled adult or not suitable for children, because there are queer kids. I was a gay baby,” she says with a laugh. “I wish there had been something out there when I was younger that said, ‘It’s OK to be this way. You don’t have to spend so many years being afraid of who you are.’”

She also thinks people should stop protecting young people from the realities of life. Diversifying the mainstream storylines increases representation, and it teaches kids about the diversity in the world. Plus, having open, honest conversations can facilitate growth.

“They’re already dealing with these things and they need to be able to talk about them and read stories about these things in a way that isn’t graphic or disturbing,” she says. “Kids are smart. They’ll be fine if they read a story that has a trans character. It’s not going to destroy them. The kids are alright, but we need to give them the tools that they need to become functioning adults and to figure themselves out in a healthy way.”

Another important part of Alphabet Soup is its all-inclusive nature. After all, as the name suggests, Oosterhous wants to include every letter in the gender and sexuality spectrum. While she recognizes some people find the long acronyms overwhelming, Oosterhous welcomes the diversity.

“I’ve heard people call [the LGBT acronym] ‘alphabet soup’ kind of derisively. But I always liked that it seemed to go on forever,” she says. “I liked that there was always something else, always another kind of person to learn about and include and make friends with. It always seemed like a fitting name because we’re trying to tell as many stories as possible. I think it would do this community a disservice to only focus on the L, the G, the B or the T.”

On the comic’s page, Oosterhous stresses that all identities are welcome. She notices infighting between communities and calls it pointless.

“I can’t get behind the thinking that like, bisexuality doesn’t belong here because it’s not gay enough or asexuality isn’t a real thing or that your identity is too long,” she says. “I’m so tired of that sort of argument. It’s absolutely harmless to have a more obscure identity because we’re all trying to figure out who we are. Anybody who wants to be a part of this community can be.”

Especially considering the loneliness that can come when trying to understand yourself, Oosterhous wants Alphabet Soup to serve as a beacon for anyone searching for community.

“Most of us have to come to the realization we’re queer in an isolated terrifying way, because we don’t know what’s happening, but we know we’re different, and that’s scary. And there’s so much shame surrounding it. You don’t know who you can tell, who’s going to be OK with it,” she says. “I want to make it clear: the loneliness will not last forever. I’m inspired by this community. Time and time again, no matter what we have to go through, we do keep finding each other.”