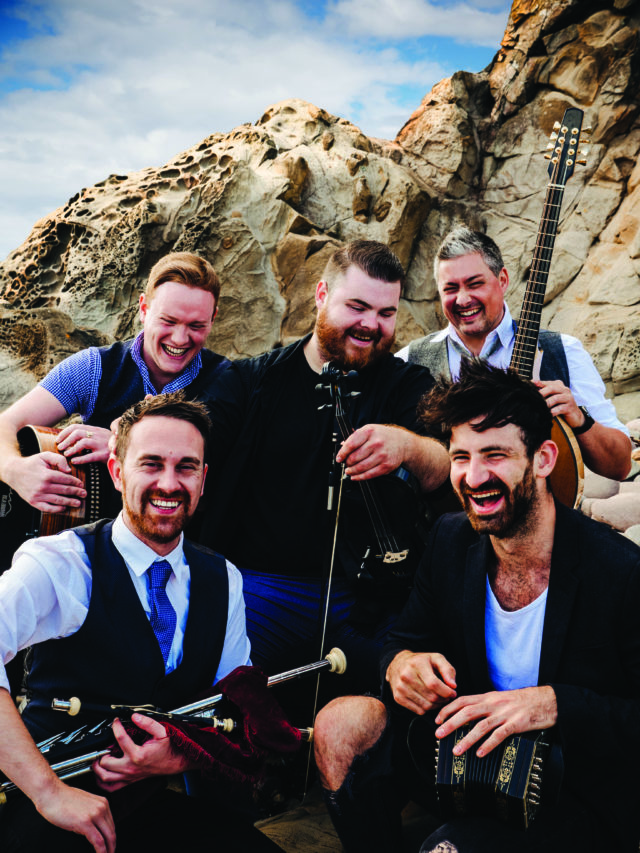 The story of Ímar — the traditional Irish music group, not the ninth-century Viking king the band is named after — starts, unsurprisingly, in a bar. (Though maybe the story of Ímar the Viking king starts in a bar as well… we didn’t do a lot of background on him.)

The surprising part? The bar’s in Glasgow, Scotland.

“We’re not even mostly Scottish. I’m the only Scottish one,” concertina player Mohsen Amini says over the phone on a Friday afternoon.

“So it’s kind of strange that we’re in Scotland at all, but they all just came to me because they love me,” Amini muses. “That’s what I like to tell myself anyway.”

Not to diminish the powerful bond between these virtuosic players, but Glasgow’s storied traditional music scene might have a little bit to do with the band’s chosen homebase as well.

As one of UNESCO’s Cities of Music, the folk music scene is alive and well in Glasgow. And nowhere does it flourish more than in the pubs, which brings us back to how the five lads of Ímar got to be a band in the first place.

If we’re to tell the story correctly, it starts long before the Wednesday night jam sessions at Sloan’s pub in Glasgow, back to when the five gentlemen of Ímar were teenagers participating in the All-Ireland Fleadh, a music festival celebrating the world’s best Irish traditional music, song, dance and language. Between the five members of Ímar they have amassed nine All-Ireland titles.

They went their separate ways through the years, collecting degrees, accolades and experience as they went. But it was the siren song of Glasgow’s music scene that lured each of the members of Ímar in, one by one. It was only a matter of time before the five of them crossed paths.

“Myself, Ryan [Murphy] and Adam Brown, we were really good friends growing up and then we met the other boys later on a couple of years ago when they moved to Glasgow,” Amini says. “Of course we all grew up listening to the same music. And we’d all go out for a couple of drinks, a couple of tunes, and we’d always meet up and try to find a pub to play in. We found a club called Sloan’s. It’s a bar just in the middle of Glasgow. We just went in every Wednesday night and it always ended up just being the five of us. Everytime we’re all like, ‘This is great, we all have a really good time.’ And everytime we’re like, ‘We should start a band,’ and then we would wake up in the morning, look at our calendars where it says ‘start a band with the boys’ and then we turn it over and go about our day and forget about it. And it went on for ages… for ages.”

It’s hard to question why it took some time to get Ímar off the ground considering the demands of the many outside projects each of the five musicians was already participating in — Mànran, RURA, Talisk, Barrule, Cara, Mabon, Mec Lir and The Lowground, each dishing out a variation on blended folk and traditional tunes from the region.

But their bond as musicians was strong, and the music they created together demanded their collective focus. Today, Ímar has released two albums, 2017’s Afterlight and last year’s Avalanche.

The words “breathtaking” and “virtuosic” and “jaw-dropping” have been handily thrown around in discussing Ímar’s two albums — and with just cause. Just watch the band’s video for “L’Air Mignonne”; watch the way they smile, eyes closed, as their fingers run effortless races across keys and strings. There’s no room for failure in this group, but there also seems little chance of it.

This is dance music, meant to ease your troubles for an evening, meant to go down smooth with a pint or three. This, Amini says, is what makes session music so universally beloved.

“There’s not a place in the world where they don’t really relate with session music,” he says of the members’ travels across the globe with Ímar and their other projects. “When we play there’s no words so you can’t misunderstand, so everyone just feels the music. We don’t try to make it accessible or dumb it down, but it’s pretty accessible music. Everyone knows when to clap and whether to cheer. It’s pretty magical that way.”

New podcast, ‘The Syndicate,’ details one of the nation’s largest marijuana trafficking organizations that set up shop in Colorado — after legalization