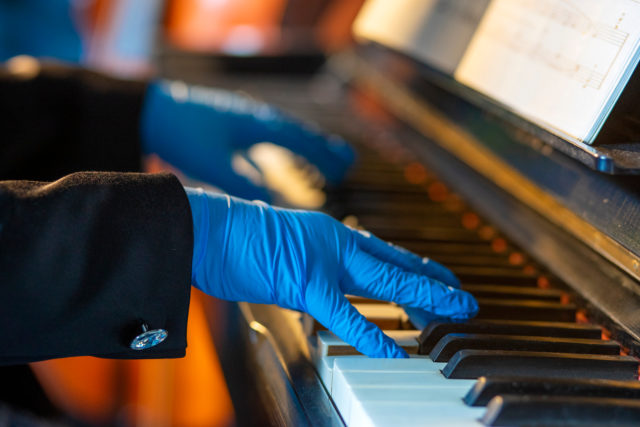 For Craig Ferguson, the million-dollar question isn’t when live music gatherings will happen this year.

“The real question for everybody paying attention … is whether it’ll happen next year,” he says.

Tough love from the founder of Planet Bluegrass. Coupled with the fact that Telluride Bluegrass Festival was officially canceled (postponed, if you like the glass half-full) on March 31, Ferguson’s words read as an ostensible death sentence for the beloved RockyGrass and Folks Fest gatherings, held in July and August each year.

But for now, Ferguson — Ferg to the Festivarians who patronize Planet Bluegrass’ trio of festivals — isn’t making an official call about the Lyons-based events. Not just yet.

“We’re supporting [Gov. Jared Polis’] efforts and kind of waiting to make any big announcement,” he says, joking that he’d prefer the “football and baseball people” call off their upcoming seasons first.

Ferguson isn’t the only one who believes we may not gather around music for a year or more. Live music businesses across Boulder County are hoping for the best and preparing for the worst as the state moves into the second phase of its response to the coronavirus, with social distancing still at the core and Boulder County still a week out from rolling back its stay-at-home order. More to the point, local venues and presenters are expecting the worst and drawing up plans for how to bridge the gap between now and normal.

“If you look at what’s going on all over the world, with the exception of … a vaccine or a cure, I just don’t see how it’s going to be realistic that things are going to be back into any sense of normalcy until late fall into 2021,” says David Weingarden, vice president of concerts and events for Z2 Entertainment, which owns and operates the Fox and Boulder theaters, as well as the Aggie Theater in Fort Collins.

On April 22, Z2 joined a coalition of more than 800 independent concert venues from across the nation in a letter to Congress asking for more assistance as their businesses remain shuttered (in a phone call on April 27, Weingarden estimates the number of member organizations has ticked up past a thousand). The National Independent Venue Association (NIVA) asks that the Small Businesses Administration’s Paycheck Protection Program (PPP loans) offer more help for their businesses, like increasing the program’s loan cap, establishing a business recovery grant fund for concert venues, granting various forms of tax relief, continuing unemployment for contract workers and artists, and extending the program until businesses can resume operations at full capacity.

“[Z2’s] last show was March 12 or 13, I think,” Weingarden says, “and we’re pretty much done through summer. We’re probably not going to have another show at a minimum until past Labor Day. So we have zero cash flow. We have nothing going on from March through September right now. And honestly, I don’t even know if September or October is going to happen because nobody’s buying tickets.”

Weingarden says the main focus is how to keep people employed. “Upwards of 120 to 150” people who work for Z2 are “directly related to events,” he says, like bartenders and security guards. Another 19 were full- and part-time employees working in management and marketing. The company is down to six because of layoffs.

NIVA also aims to work with the federal government on crafting guidelines for venues as mass gatherings are eventually reinstated. Through the coalition, venues are already sharing initial plans with one another, though Weingarden says it’s far too early to say what’s necessary.

“Now that we’re past sort of the initial shock, we’re starting to really dig into what [it looks like] when we start reopening,” Weingarden says. “Do we have to stock up on those gun thermometer things so you can just shoot and get [someone’s] temperature? Should we be stocking up on face masks and single-use cleaning supplies? … That all has a cost. What if we have to open at a reduced capacity? What’s that going to look like for our staffing costs? … How do you open at a reduced capacity and with six feet of social distancing per person? What does that look like when you kind of grid it out and is that even feasible? I don’t know.”

“We are probably looking at hiring some different people for our organization right now,” Forster says. “We may want to spend more money on producers and people who are content creators rather than people who are involved in the live business of music.”

But Forster’s main concern these days isn’t for the future of eTown but for “the creative class,” the working musicians with no gigs who are essentially “the working poor.”

“They’re like an invisible substrata of our community that is going to be every bit as needy as anybody else pretty soon,” he says.

He formed Create Boulder in 2016 to address this issue. In partnership with the City of Boulder, Create Boulder recently awarded 66 artists of varying disciplines, not just musicians, grants of $599. The money is designated for a project the artist detailed in an application to the City.

But it’s not just musicians and venues who are losing money. Cities stand to lose big with the loss of live music.

Ferguson has called the decision to cancel this year’s Telluride Bluegrass Festival, held yearly around the summer solstice in June, both the easiest and hardest he’s ever made, but he isn’t nonchalant about the impact it’ll have on the community that hosts it:

“For [the town of] Telluride, it’s a shock to the economic system.”

In 2017, the Telluride Tourism Board calculated an average of $12.6 million in annual revenue from the bluegrass festival, which attracts some 12,000 people each year. On a smaller scale, RockyGrass and Folks Fest contribute to the economy of Lyons. In 2016, the Town of Lyons estimated that the festivals brought in an average of $46,000 each year just for parking and camping fees over a five-year period. About 3,000 people descend on Lyons for each festival, often choosing to come a little early and stay a little late.

Matt Chasansky, manager of Boulder’s Office of Arts and Culture, says that the City collects 5% of every ticket to a concert, nightclub or theater with its admissions tax. While Chasansky couldn’t give an exact number for the amount of revenue Boulder County collects from live music, he pointed to a 2018 study by the University of Colorado Denver that found live music generates more than $300 million annually for Boulder, Weld and Larimer counties combined.

Of course, no one can see the future, and there are glimmers of hope: A New York Times story on April 27 reported that a team at Oxford University in England are preparing a coronavirus vaccine test for the end of May (if it works, full roll out would be September). Still, that’s nothing venues and promoters can bank on, and the live music industry clearly sees bad omens in the tea leaves.

“I think we’re reeling in shock,” Ferguson says. “People are looking for answers and because there’s no way to know, people are stumbling with shitty answers and shitty analysis.

“I think we’re ironically a little excited because we realize there’s no choice,” he adds. “Our festival next year is going to be on the edge of consciousness. I think we feel challenged but … Festivation is something that’s a big deal for a lot of people to participate in. How that’s done in the future, I think we’re responsible for finding that path. It’s a good challenge. It’s a worthy challenge to work on reexamining all the aspects of a festival with respect to social responsibility.”