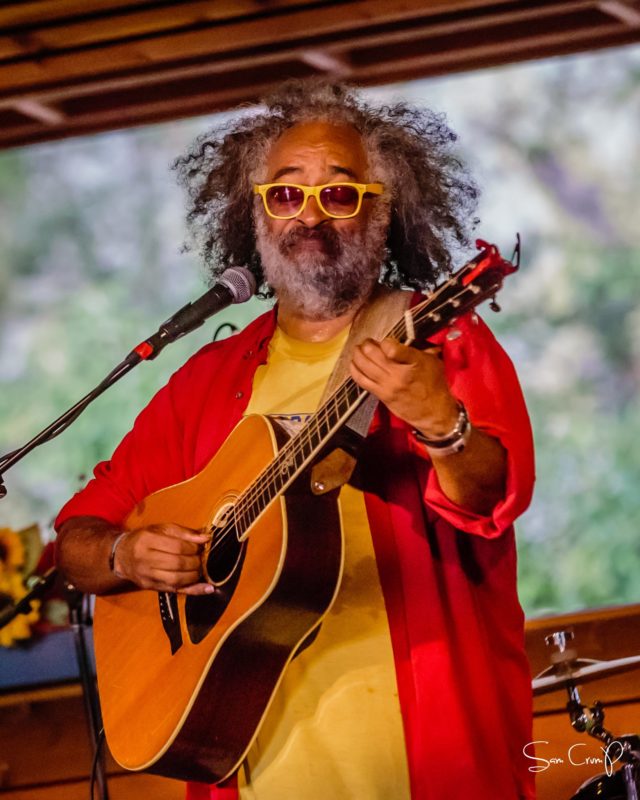 Vance Gilbert is black. Vance Gilbert plays the acoustic guitar. Vance Gilbert does not play the blues. Most of us assume a black man by himself with an acoustic guitar played the blues because, well… we’ve been conditioned to assume that. But don’t fret, Gilbert doesn’t hold it against us. He thinks such corners of racial presumption are an interesting place to stand. He believes much can be learned and many a laugh shared in such places. But he also admits that there are a few darker corners these days where laughter is harder to come by and the lessons to be learned should have been learned a long time ago. He says of our current political predicament, “This last year has left me pretty legless. I just feel wobble-legged. I’m scratching my head.”

Maybe Gilbert doesn’t hold that blues thing against us because he knows the truth of him is not likely something anyone would ever assume. I mean, how many young black men growing up with a lacking parental presence on the streets of Philly eventually have their world turned upside down by a chance free ticket to a Shawn Colvin concert? Pretty sure Gilbert’s “only chip in the cookie” line could have gotten its start that night. Couldn’t have guessed that one from his pic, right? Truth is stranger than playing the blues.

So the timeline from Philly and his Colvin epiphany has been a bit compressed.

Gilbert’s brother lived across the street from a small college in New London, Connecticut. His brother told him schools like that were offering money for smart black kids to attend and that he should give it a try. He did.

Gilbert brought his wide-ranging musical tastes from Philadelphia — Philly Soul, Coltrane, The Beatles, Motown, Joe Tex, Andrea Bocelli, Earth, Wind & Fire — to New London. New London got Philly Soul and Motown from Gilbert, Gilbert got the J-names from New London. He says everyone at his college was listening to James Taylor, Jackson Brown and Joni Mitchell, aka the J-names. Gilbert was immediately drawn to this new music. He recognized his own needs as a storyteller and this music was a perfect vehicle.

A folk singer was born… sort of.

Gilbert got an old 12-string guitar, then calculated he didn’t need all those strings and sawed off the top six tuning pegs. After that feat of engineering, he pretty much taught himself to play and launched a career in children’s theater in the schools. Accompanied by puppets and props, Gilbert’s life as an entertainer took flight.

Children’s theater was Gilbert’s Kitty Hawk. After a while, he knew he had more to say and further to fly so he did what every aspiring singer-songwriter does: he moved to a big city, in his case Boston, and started cooking in a restaurant. It served his music well.

“All my friends in Boston were at the Berklee College of Music,” he says. “So I ended up playing a lot of jazz. Being around Berklee was great. I was learning a lot.”

“So I was hanging out and doing jazz and then someone had these tickets to a Shawn Colvin show. I went and it was life changing. Half way through the set, her guitar just disappeared and that allowed this impressionistic artistic experience to come through. She is a great guitar player but it just disappeared.”

It happens to writers, painters and all types of artists. Every so often you stumble onto another creative whose work connects to your own artistic impulses in such a powerful way that it forever shapes your craft at least to some degree. Some people can see the faint outline of the influence, to others it’s invisible.

Gilbert was doubly lucky. Not only did he hear what he aspired to that night, he ended up touring as Colvin’s opening act.

From Philadelphia to being a black folk singer-songwriter in front of nearly all-white audiences in the days of Trump… the times they are a-changin’.

Gilbert has always discussed race at his shows, usually by way of humor. The black folk singer tends to be the elephant in the room on the folk circuit, so Gilbert has fun with it — purposeful fun. But it’s getting stranger.

“The other day I heard a guy in the audience say, ‘One great thing about having Trump in office is now I don’t have to be politically correct.’ I thought, what? What are you saying, now you can just use the word… ” He stops himself and laughs. “I think people have permission to act badly now.”

So what is a great songwriter who has always been attuned to racial issues to do about it? Does Gilbert feel a responsibility to write about what’s happening currently on that front?

He has recently written a tune called “Taking a Knee.” It’s classic Gilbert using humor to express an important point of view. About “Taking a Knee” he says, “I wanted to take a left turn, I wanted to express the fourth view. If you’re African American, there’s still something here to look at. Black people are held to a wacky standard.”

He continues, “I keep thinking my music will be a beacon, a place to lay and rest from all this, but I don’t know what I’ll write yet. I think every night about this music, how I came to it through the side door. Folk music gave me an audience because I have a story to tell. That’s what I do. But I’m not sure what my job is at this point.”

Whatever the job, it’s safe to say it has something to do with songwriting, singing, making us laugh at ourselves and bringing us all closer together.