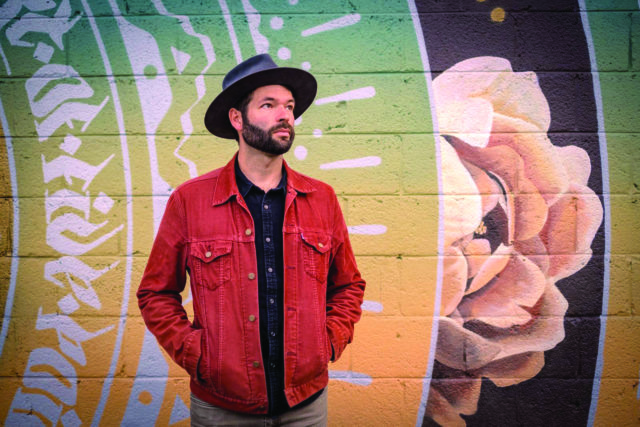 Joel Van Horne has tended to make records rooted in location: the canyon country of Utah, the misty coast of central California, and his family cabin in Wyoming’s Medicine Bow range, Covenhoven, which Van Horne took on as his stage moniker.

But for the most recent Covenhoven record, IV, Van Horne steers away from this tactic.

“There was a very conscious choice at the outset of this record where I kind of realized that I didn’t want to do that anymore; it was starting to feel a little bit limiting in some ways,” Van Horne says over a phone call from his home in Denver. “A thematic or conceptual idea can be really exciting, and can be helpful in a creative way, but then it can reach its completion.”

IV feels like a record about change, about uncertainty, about loss and hope and nostalgia, not just for Joel, but for the whole Van Horne family.

Just a few months ago, Van Horne’s father, Brian, sold the family cabin. Then, on Jan. 7, Brian died after years of living with and treating cancer.

“There was 70 years of family history [in the Covenhoven cabin],” Van Horne says. “There’s pictures of four different generations of Van Horn’s spending time there. Every winter we would shut it up, and then we’d open it back up in the spring. And so right now it doesn’t feel real, but come springtime, there’s going to be no more cabin and it’s a huge loss. It actually does feel like I lost a family member. It’s rough to lose my dad and the cabin within a couple of months and feel like that whole part of my life has been kind of ripped out.

“But in some ways it’s a relief, because he’s been in a lot of pain,” Van Horne says of his father’s death. “The last several months have not been easy. But he was lucky to be able to stay at home; he died in his bed, peacefully in his sleep. But I don’t think I’ve wrapped my head around it quite yet—it’s too fresh. He was a big influence musically on me. He never really was able to pursue a career in music, but he always played, was always writing songs. He was a huge Bob Dylan fan, and so that all rubbed off on me big time. You know, I’ve been looking through his photos in the past 10 days or so. It’s just amazing. There’s so many great photos of him with his guitar, and he’s clearly posing for the camera. Like, he was very into this idea that ‘I’m an artist, I’m a songwriter.’ I’m thinking to myself, ‘Man, I need to up my game a little bit here.’”

IV was already released by the time the cabin was sold and Brian had passed, but there’s a sense that Van Horne was preparing for the losses, a hint of exploration, like Van Horne is taking chances, throwing caution to the wind—upping his game a little bit.

“Just smile and wave and give the fuck that no one gave,” he sings on “Easy Out.”

“Even using the word fuck on a song, it took me months to come to terms with that,” Van Horne admits. “That was one of the things that felt new in terms of what I was doing creatively, just feeling like I want to be a little bit more soul-bearing in that way. I don’t want to soften things, I want to punctuate them.”

Part of Van Horne’s approach with IV was to get collaborative. Pushing away from the “basement bedroom record” method that had given life to his previous three records, Van Horne set out in early 2020 to create IV with a cast of local musicians, including Ben Wysocki of The Fray, Julie Davis of Bluebook and Boulder’s own Gregory Alan Isakov.

“When you work with other people, it really does go in new directions,” he says. “Sonically, I think it’s my favorite of my four records. I feel like it really has a warmth to it.”

Van Horne roots around in his childhood on tracks like “Everything In Between”:

Van Horne was raised in the Lutheran church, the second son of a preacher’s daughter. But like many of us raised in religious homes, he’s found his own approach to a higher power.

“I was trying to encapsulate the experience of spirituality, but not necessarily in a religious sense,” he says. “I’ve noticed in myself this desire for spirituality, but not really feeling like I relate to any one religion. We live in an incredible world, and there’s so much mystery and beauty. It’s been tough to see that lately. I feel like we’ve been tested big time in that way [over the last two years]. But I think it’s there and I think it doesn’t need to be called something or named or wrapped up in a book.”

Van Horne’s faith remains despite the heavy load he’s had to bear over the past three years. In 2018, his brother, Ben, a sound engineer at Denver’s Mighty Fine Productions, died of a pulmonary embolism. The track “Nothing Left To Be” speaks to this loss:

And it’s a long way from here to heaven / And there’s a garden here that still needs tending / On this line that blurs the new and old / There’s nothing left to be but beautiful.

“For me as an artist and a songwriter, I feel like that’s the best way I can be spending my time is trying to contribute to the beauty of what we have here,” he says. “That idea has been tested a lot in the last couple years. As an artist I kind of wonder: Is this what I should be doing? Should I be on the front lines somewhere, fighting for the environment or social issues? I think that where I’ve gotten to in my head is that I just know what I’m here for. Through everything over the last couple of years, it’s just made me feel even stronger that that’s what I’m here for, is to hopefully make something that helps people through.”