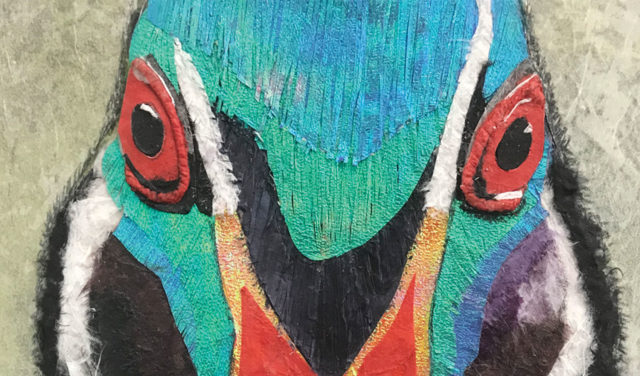 The art world is no stranger to sleeper success stories — late bloomers. Paul Cézanne’s soft, colorful landscapes didn’t garner attention until the painter was in his 50s. Louise Bourgeois was in her late 70s when her sculpture Maman made her a household name.

Judith Bergquist and Gigia Kolouch seem to be on a similar trajectory. The two met in an art class at the Colorado Institute of Art 30 years ago, Kolouch a freshly minted transplant from Marin County, California, and Bergquist, who’s from Fort Collins, newly settled in Denver after more than a decade traveling the country as a theater props artisan/director.

But art was an outlet, a meditation, for both women — not a way to pay the bills. Kolouch taught cooking and gardening classes while Bergquist became a landscape architect, their shared passion for nature often taking center stage in their artwork.

That shared passion for nature is what binds their disparate artwork, now on display in the show Flora & Fauna at Bricolage Gallery in Art Parts Creative Reuse Center.

Kolouch’s series of encaustics — painting with pigmented wax — tell a harrowing tale from the garden in abstract, while Bergquist’s paper “paintings” celebrate the intricate wonder of animals large and small.

In the coastal redwood forests of Marin County, a young Gigia Kolouch would sometimes lay inside a fairy ring, that bare circle of earth that forms as the tree reproduces by sending new sprouts up from the trunk of a parent tree.

“Really the best thing in the world is just to lie down in the middle of one of those redwood circles and look up,” Kolouch says. “You almost feel like you can just melt into the ground, it’s just so beautiful.”

She found a love of nature at home too, gardening with her mother and grandmother and learning to cook by watching them in the kitchen. She found herself enraptured by the cycle: Growing the food that would go on to sustain her own body felt like the highest expression of life.

As an adult, when Kolouch found herself in Colorado after her husband was accepted into architecture school at CU-Denver, she turned to her twin passions to build a career, developing cooking and gardening classes for all ages. She helped build the Seed-to-Table school program through Slow Food Denver, where students as young as second grade learned about gardening.

When she wasn’t teaching gardening and cooking ― or tending her own backyard garden and cooking for her family — Kolouch was developing her art, namely acrylic painting. She took classes for about 15 years before discovering encaustic painting. Manipulating pigmented wax, building it up in layers, smudging it, carving into it to create engravings and texture fascinated Kolouch, and she’s been doing it ever since.

Her work ranges from post-impressionistic to softly focused abstractions, always centered on nature: macro impressions of voluptuous wild rose hips pods and barely there carrot seeds; lush and misty studies of leaves and supple blooms; inviting representations of her home garden through the seasons.

The series of a dozen or so small encaustics on display at Bricolage were originally one large piece, dismantled into separate pieces that together tell a harrowing story that more gardeners in the U.S. are becoming familiar with as the years pass: a fight to save a garden from the steady much of an iridescent army of invasive Japanese beetles.

“They destroyed my grapevines,” Kolouch says. They’d been growing for 15 years.

“So it’s kind of like my eulogy to my grapevine,” Kolouch says of the series, “because I pulled [the vines] out after I made all those paintings. I just couldn’t take it anymore.”

But any gardener worth their salt knows that this is the game: Nature throws you a curveball, and maybe you strike out, but the next time you step back up to the plate you’re a little bit wiser, a little more prepared. Honeysuckle now covers the fence where the grapevines once were in Kolouch’s yard.

Truth and beauty in the everyday are the beating heart of Kolouch’s encaustics, her eye attuned to the world’s smallest wonders. Her art is a way, she says, to combat “plant blindness.”

“People don’t recognize plants as living entities,” she says. “They treat them like furniture, not as something that’s alive and has its own independent existence.”

“So anything that I can create where a person might stop and say, ‘Wow, what’s going on with that plant?’ or, ‘What an amazing life form that exists,’ I’d be happiest if someone got that from my work.”

Judith Bergquist: biologist in another life

Judith Bergquist’s background in theater is evident in her paper “paintings” — the masterful command of light and shadow, texture and color interplay in her work is a direct result of years of creating illusions that look real on stage. Her paper creations are like stage sets, tricking your eye into believing that staircase goes to another floor or, in the case of Bergquist’s art, begging your hand to reach out and touch the fuzzy underbelly of a bat or the luminous feathers of a wood duck.

“Everybody wants to,” Bergquist says with a laugh. “I’ve learned a lot over 10 years of doing these. My earlier works were flatter,” less touchable.

Her love of creating portraiture with paper came from a love of a good challenge: What could she make paper do? Could it create believable shadows? Depth? Varied texture? It took years, but she found that she could do a lot with the humble medium.

Growing up in Fort Collins, Bergquist describes growing up in a “4-H family,” learning to sew and build things with wood as a young person. She got involved with theater in grade school, which later blossomed into a decade-long career traveling the country as a props designer and director. When she grew tired of traveling and wanted to be closer to her family, she settled in Denver and tinkered with the idea of becoming an art conservationist before switching course and entering into another long-lived career as a landscape architect. Like Kolouch, she raised a family, gardened and slowly built new skills as an artist, often experimenting with technique and mediums.

In 2017, she quit one of her two part-time jobs to devote more time to her art, a kind of third act in Bergquist’s life. Perhaps it’s coincidental, but soon after she met Denise Perreault, executive director of Art Parts and the curator for Bricolage Gallery, who said that Bergquist’s recycled paper artworks would be a perfect fit for the small gallery dedicated to found-object and recycled art.

Much of Bergquist’s art focuses on endangered species, or misunderstood critters like bats. She often donates 10% of the proceeds from selling her artwork to the Wild Animal Sanctuary in Keenesburg, Colorado.

“I probably would have been a biologist in another lifetime,” she says, which seems funny considering the evidence at hand suggests Bergquist may very well live that dream in this life.

Screenplays often have four acts, after all.