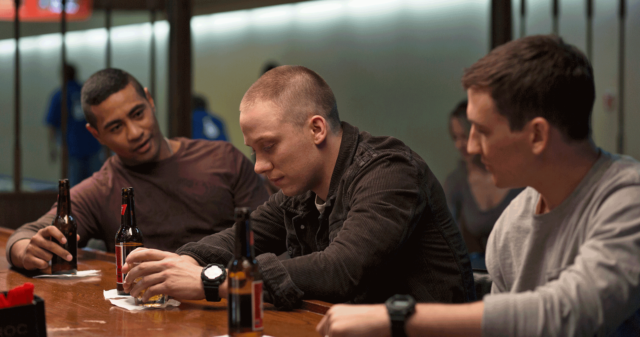 When writer/director Jason Hall’s brother returned home from the 1990s conflict in the Middle East, he did so with his “arms and legs and sense of humor intact.” However, the more Hall talked to his brother, the more he realized something inside him had changed, something unspoken.

It was a familiar realization, one anyone related to a soldier of war would recognize. Hall saw it in his uncle, who fought in Vietnam, and his grandfather, who flew in World War II. As Hall put it, the distance between him and those who returned from combat became “the unspoken space between us.”

Those unspoken spaces between soldier and civilian form the core of Hall’s latest film, Thank You For Your Service.

Based on the non-fiction book by David Finkel, Thank You For Your Service tells the story of three soldiers — Adam Schumann (Miles Teller), Tausolo Aieti (Beulah Koale) and Will Waller (Joe Cole) — returning home from Iraq; all with minimal physical scars but deep psychological ones.

Schumann, Aieti and Waller quickly discover that they are incapable of vocalizing what combat was like or discussing what they saw and did. Schumann feels particular guilt for having dropped a wounded soldier, further crippling him. Nightmares haunt all three and sleep is rare. Drinking is common, particularly in each other’s company, where they feel as relaxed as possible.

This does little to help their relationships at home, which only become further strained by a lack of communication and empathy. One fiancée decides it’s too difficult and leaves without saying goodbye. Another grows distant. The unspoken spaces between become chasms, and the soldiers fear that the future awaiting them is far worse than anything they faced in combat.

Thank You For Your Service is no rah-rah propaganda wrapped in the American flag; it is a grim and sobering story about the difficulties soldiers face as they return home, the apathy with which non-soldiers look at them and the frustrating Department of Veterans Affairs. The scenes at the VA, just enough and not too much, give a sense of a very different kind of hell that awaits those who gave so much; one populated by kind people and ruled by infuriating bureaucracy. These VA workers try to do their best, but with little resources and a finite number of hours in the day, there is only so much they can accomplish. But try telling that to the soldier who hasn’t slept in weeks and just wants help.

Many movies have covered this territory — The Best Years of Our Lives, Born on the Fourth of July and Coming Home to name a few — but they pale in comparison to the number of films that fan the flames of combat in the name of patriotism. Thank You For Your Service helps balance the equation. It is not a perfect film, nor will it fix the multitude of problems surrounding war and veterans, but it can help get the conversation going. We have to start somewhere.