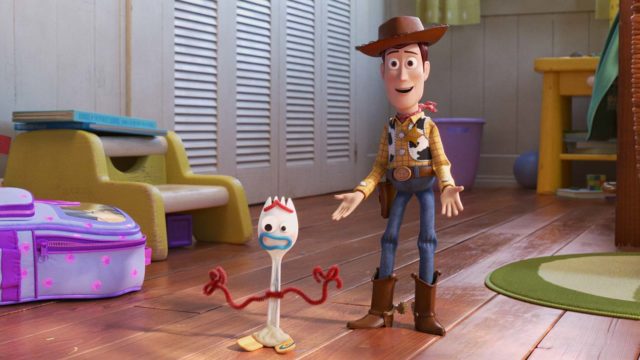 “I have no idea,” he replies with a kind smile.

Those are the final words of Toy Story 4, Disney/Pixar’s latest, and reportedly last, addition to the beloved franchise that launched the computer-generated animation empire back in 1995. There we met Woody (voiced magnificently by Tom Hanks), the leader of Andy’s toys who worked overtime to make sure all the others were accounted for and played with. Obstacles included trying to stay out of next-door neighbor Sid’s vicious hands while convincing new arrival Buzz Lightyear (Tim Allen, never better) that he was nothing more than a child’s plaything.

Purpose is the heart of Toy Story. “I was made to help a child,” Woody tells anyone who wonders why he doesn’t ride off into the sunset. For years, that child was Andy, but Andy has grown up and gone off to college. No longer needing Woody, Buzz, Jessie, Rex, Potato Head, Ham, Slinky and the Aliens, Andy bequeathed his friends to Bonnie (Madeleine McGraw), a kindergartener who isn’t as enamored by the 1950s cowboy as Andy was.

But Woody is a helicopter parent at heart, and he sneaks into Bonnie’s backpack on her first day of school. No one plays with Bonnie at school, so she makes a new friend, Forky (Tony Hale), a discarded plastic spork with stuck-on googly eyes, pipe cleaner arms and a popsicle stick for feet. And by scribbling her name on the sole’s of his sticks, Bonnie breathes life into a hunk of trash that desires nothing more than oblivion.

But Bonnie loves Forky, and Woody serves Bonnie, so despite Forky’s suicidal tendencies — and they are numerous — Woody makes it his life’s mission to preserve Forky’s existence. Yes, it raises all kinds of philosophical questions about being and non-being, but the movie more or less dodges them, segueing instead into an adventure story of lost love while continuing to address the franchise’s themes of submission and purpose.

There are new toys: Ducky (Keegan-Michael Key) and Bunny (Jordan Peele) provide comic relief, and Duke Caboom (Keanu Reeves) steals the show. Gabby Gabby (Christina Hendricks, outstanding) and her hoard of Charlie McCarthy ventriloquist dummies play the role of antagonist but never slip into outright villainy — much in the same way Woody never fully falls into the role of hero.

Toy Story 4 is more reserved than the previous installments. It never reaches for bombastic profundity and lacks a climax as gripping — or terrifying, depending on your view — as the holocaust that marked Toy Story 3. It’s a humble movie, slightly smaller than you might expect for a summer blockbuster, while still being quietly provocative.

But Toy Story 4 isn’t perfect: Buzz is uncharacteristically rendered dumb, and it’s the movie’s weakest point. It’s also a little sad to see familiar friends pushed aside for new toys, new challenges and a great, big, beautiful tomorrow. But the more you think about it, the more it works. That’s because the world of Toy Story 4 feels more open and less threatening than ever before. The water is wide, but we’ll cross, my true love and I.