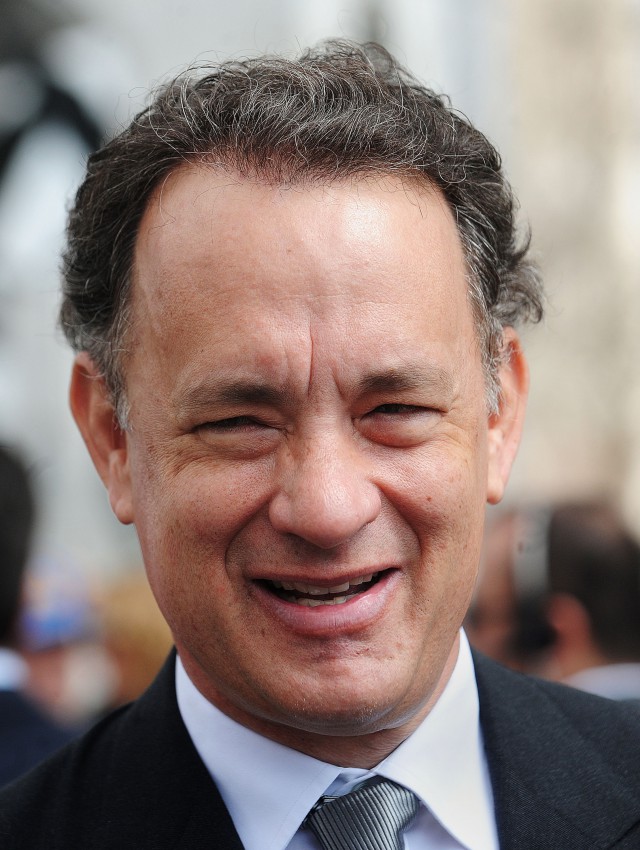 — Before the two best-actor Oscars, the hit movies and other distinguished projects that catapulted him into elite ranks, was an un-pretty woman.

In 1980, Hanks got one of his first breaks with “Bosom Buddies,” an show in which he and played bachelor ad men who move into an all-female apartment house
after their building is condemned. The actors donned wigs, bras,
pantyhose and skirts as they hung out with their neighbors, including a
blond bombshell () who was the object of Hanks’ affections.

The theme song, “My Life” by ,
was a major hit, but “Bosom Buddies” flopped with critics and viewers,
flaming out after two seasons. Hanks would emerge unscathed; two years
later, he starred in the man-loves-mermaid comedy “Splash” that
launched his meteoric film career.

Instead of treating “Bosom Buddies” as a footnote
best forgotten, Hanks embraced his past with open arms Saturday during
a gleeful reunion with Scolari and the cast at Sony Studios for the
eighth annual “TV Land Awards.” The show, which will air Sunday on the
cable network, marks the first “Bosom Buddies” reunion since the show
went off the air.

“You can look back and say, ‘You know, we really did
some great shows,'” said Hanks backstage after accepting the TV Land
honor with Scolari, Dixon, and Holland Taylor. The cast gave a special tribute to costar , who died in 2005 of breast cancer.

Life after “Bosom Buddies” brought varying degrees
of good fortune to cast members. Scolari, who shared top billing with
Hanks, later joined the cast of “Newhart” for six years and has worked
steadily in film, TV and theater. Hopkins, who had been a member of the
hit group and Dawn, has appeared in
several television shows (“Family Matters”). Taylor has been a regular
on several series and currently plays the mother of and on “Two and a Half Men.” Dixon married actor and made a memorable appearance in “Wayne’s World.”

Taylor said that during the “Bosom Buddies” days,
there was something about Hanks that set him apart. “I called my mother
after filming the pilot and said, ‘There’s a boy on this show that is
freakishly talented.'”

“Tom’s talent as a comedic actor was more than
evident,” added Scolari. “But no one could have predicted what he would
be capable of as a dramatic actor in the years to come.”

Though Hanks achieved success far beyond his “Bosom
Buddies” mates, he was as giddy with excitement as his former
colleagues as they reconnected and teased one another. The memories
flowed: the time a live tiger that was part of a storyline got loose on
the set; the “computer dating” episode with a guest appearance by an
actress named , who would later become
Hanks’ wife; long days of camera blocking and rehearsals where the
exhausted, frazzled cast would improvise material that would become
part of the finished episode.

There were also tough times behind the camera. Both
Hanks and Scolari were in troubled marriages. Hanks had no car and had
to borrow money from the producers. “I was stone-cold broke,” he
recalled.

Asked how it felt to get back together, Scolari
quipped, “I feel a bit gassy,” while Dixon countered, “No, I noticed
that you had a tear in your eye.” Added Hopkins: “Yeah, he gets very
emotional.”

In fact, the show’s lack of success helped cement their obvious warmth for one another.

“Occasions like this make me want to see everyone
more,” said Taylor. “We were not a hit, we were not anything. We were
virtually invisible. As a result, it just came down to us enjoying each
other, and we really did. It was like kids fooling around in the back
yard.”

“Except we got paid,” chimed in Hopkins.

The cast credited executive producer with expanding the show beyond its basic gimmick. They also praised the shows’ producers, writers and director , a veteran of numerous TV shows (“Family Matters,” “Hangin’ With Mr. Cooper”).

Said Hanks: “We really owe those guys our careers.”

Still, being in drag was a bit of a drag for Hanks and Scolari.

“We hated it,” said Scolari. Piped in Hanks: “We
would tell the writers, ‘Aren’t we strong enough as clever guys with
our banter? Isn’t that enough?’ And then there would be the next
episode and we’d have to dress up.”

Added Scolari: “We really took a beating in the press, got hammered for it the first few weeks. But when comes out with ‘Tootsie,’ everyone goes, ‘Ooooh, masterpiece.'”

Hanks and Scolari, along with their once, present and future friends, roared with laughter.