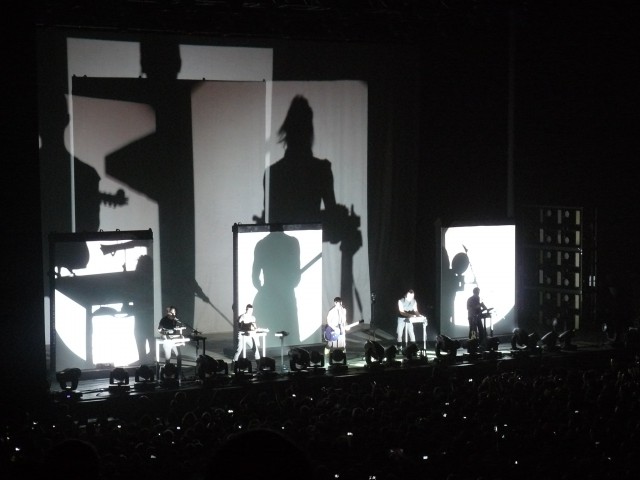 The recent revival of Nine Inch Nails has given many critics
of a certain age the chance to reaffirm what their teenage selves were
convinced of: the band’s frontman Trent Reznor is a genius long ahead of his
time.

I didn’t feel quite that way in the ‘90s. My observations
were that NIN’s primary demographic was morbidly obese girls with too much
eyeliner and the boys perpetually dressed as The Crow for Halloween that loved
them — a crew I didn’t want to run with — and Reznor’s anguished lyrics made me
want to roll my eyes and shout ‘suck it up cupcake,’ at the stereo. Of course I
didn’t understand Nirvana at the time either.

But it was undeniable that the last two decades in rock are
those that Reznor built. After the initial wave of skeptics I hung around with
and the bands we loved rode into the sunset of the fading millennium, the music
world spent as much of its time trying to recreate the electronic chimera of
guitar rock and harnessed wild noise of Pretty
Hate Machine as it did trying to imitate the bleep blooping electro-pop of
U2’s Zooropa. Reznor wasn’t the first
to use a sampler or a synth, but he was one of the first to make it seem as terrifying
as rock music required. Devo was about as scary as your weird cousin Larry, and
New Order was more about dance parties than they were horror films and raw
anger. David Byrne liked synths, not Kerry King. And seriously, look at the
haircuts on Duran Duran and Flock of Seagulls.

Reznor was even a pioneer in the very idea of a modern band,
in that it’s not a band in the traditional sense at all, but a solo recording
project that is then filled out with hired hands for the stage. In the age of
ubiquitous laptops pre-loaded with Garageband it’s not that unusual, but in the
late ‘80s when Reznor worked as a janitor in a recording studio during the day
and laid tracks at night when it wasn’t being used, it was virtually unheard
of.

Claiming in interviews to be frustrated with the state of
live music, last year, Reznor set out to reinvent the stage show as much as he
did the band formation process with The Tension Tour. Its light design created
complex and living three-dimensional scenes intended to make the audience
afraid to look away or take a break to pee because they might miss something
profound. It largely worked. Critics and audiences loved it, and the concert
film recorded at LA’s Staples Center is gorgeous.

But when Reznor took the stage at Red Rocks last night, it
looked as if he were going in the opposite direction, one highlighting both his
roots and his legacy. The enormous stage was nearly bare, containing only a
single small keyboard stand and a microphone. No lights or set pieces. No band.
Reznor strolled out unannounced, dressed in a black sleeveless t-shirt and
shorts, and cued the sampler to play the beat for “Copy of A.” It genuinely
looked like he was going to laptop jockey the show, filling the stage only with
the size of his legacy, the closest NIN could get to playing an “unplugged”
show. It would have been a fitting follow-up to Tension, and a truly audacious
move.

But Reznor had something grander in store.

As the song progressed, other band members slowly walked on
stage, bringing their instruments with them, and slowly building layers of
sight and sound. First came the extra band members. Then low-set bright lights
that projected enormous silhouettes onto a plain white backing behind the band.
Then a series of large blank square panels that were wheeled around the stage
to capture the silhouettes and a following series of lights and video
projections.

It built and built and built until the thundering chorus of
“War Pigs,” when the backdrop fell to reveal an arsenal of lights blasting
orange beams that pierced the air like fire spitting forth from the barrel of a
gun, all focused dead center stage.

From that point on, it was pure arena-rock spectacle, with
lights blazing and the flat panels moving around the stage for songs and
choruses to create a visual presence as dynamic as the sound, all of it hitting
harder for seeing where it started and having taken that journey with the band.

It’s not hard to be grandiose about the progression of the
concert, and cast it as a metaphor for Reznor’s own journey from unaccompanied
and unadorned solo act diddling with samplers to a larger-than-life megastar.
But if we’re going to go the route of grandiosity, then I prefer to see it as a
how-to manual that builds upon Tension’s call to arms for the music industry.
First Reznor showed them the grand ideal they could be shooting for, and then
he want back to scratch, to a bare fucking stage with just one man, and he
built it for them, step by step, piece by piece, over the course the show until
that single man and his keyboard became a god whose every gesture commanded the
forces of light and darkness as if to say: ‘you can do this too, just follow
these three easy steps.’

It’s true that the average garage band doesn’t have the same
resources that a multi-platinum arena-level artist does, but resources don’t
mean squat without the vision to put them to good use. And vision is something
Reznor was practically handing out at the door as SWAG.

I still don’t know that I like Nine Inch Nails as a band.
But after a decade whose stages were full of boring shoegaze introversion and
the continuing wave of spacebar as lead instrument, I’m rooting for them to
burn the music world down once again. And unlike those other critics, I’m glad
to look back at my teenage self in scorn and say, ‘you were a fucking idiot.’