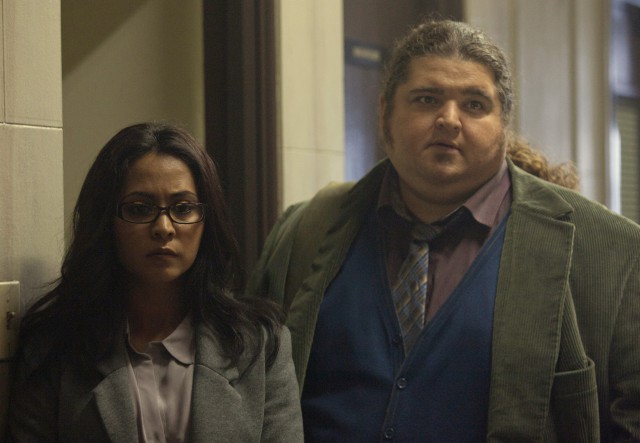 WALNUT CREEK, Calif. — Sometimes, just a single word
can stir one’s imagination. When, for example, producer J.J. Abrams was
first pitched the idea for a TV drama pegged to Alcatraz, he was
instantly intrigued.

“The mere mention of it is so provocative and
compelling,” he says, referring to San Francisco’s legendary island
prison that once housed such notorious criminals as Al Capone and George
“Machine Gun” Kelly. “It just made me immediately lean forward. I
couldn’t believe that there never had been a show called ‘Alcatraz.’”

Until now. On Monday the Fox network will, indeed,
premiere a fantastical crime series from Abrams called “Alcatraz.” But
while the show may be breaking prime-time ground, it’s certainly not the
first time Hollywood has been drawn to the little island in the heart
of San Francisco Bay.

Movies such as “The Rock,” and “Escape From Alcatraz”
have been inspired by it. Various TV shows through the years have
referenced it. Moreover, numerous books and even songs have been written
about it.

The latest addition to this pop-cultural lore is a
show that reflects Abrams’ penchant for over-the-top concepts and
Byzantine mysteries. “Alcatraz” is about a small team of investigators
struggling to discover why some of the prison’s former inmates are now
wreaking havoc in San Francisco, 50 years after they vanished without a
trace. The cast is led by Sam Neill, Sarah Jones and Jorge Garcia, who
made a name for himself in Abrams’ biggest TV hit, “Lost.”

“Just the name puts a shiver down my spine,” he says.
“ … Imagine the cruelty of a prison where you sit behind bars looking
at something as lovely as San Francisco and San Francisco is looking at
you. That’s such an incredibly harsh reality.”

Jack Bender, a director and producer on the TV
series, recalls, as a kid, thinking of Alcatraz as a very scary place
with an “Edgar Allan Poe vibe” to it. As for Abrams, he says it has the
feel as a “ghost house.”

That sense of gloom associated with Alcatraz is
something storytellers have fed off — and embellished — over the years.
As a National Park Service tourist guide to the island notes, “the truth
of Alcatraz has often been overlooked, lost in the fog of its myths.”

One of the most persistent myths, according to
Alcatraz expert John Martini is that the facility was a horrific prison.
In fact, he said, most inmates who made multiple stops in the penal
system considered it to be their best experience.

“There were no gangs. It was safe and clean. You had
one-man private cells and the food was OK,” said Martini, who leads
tours of Alcatraz and has extensively written about it. “The worst thing
about it is that it was the end of the line. When you were sent to
Alcatraz, it was as if you had fallen off the edge of the earth. But it
certainly was no hellhole.”

The film that exercised the most creative license,
says Martini, was “Murder in the First,” a 1995 release starring Kevin
Bacon, who played Henri Young, a bank robber sent to Alcatraz in 1936.

“It portrayed the prison guards doing despicable
things — beating the inmates, locking them in dungeons …” he says.
“The Bureau of Prisons was livid over that film.”

Much more palatable was “Escape from Alcatraz,” the
1979 film starring Clint Eastwood as Frank Morris, an inmate who
engineered what possibly was the only successful escape attempt in 1962.
(He and his two accomplices were never found and assumed to have
drowned).

Michael Esslinger, a Monterey, Calif., author who has
penned several nonfiction books about the island, calls “Escape” the
“touchstone film” of his Alcatraz library.

“It’s only about 40 to 50 percent historically
accurate, but at the core of the film is the ingenuity of the human
spirit,” he says. “While I don’t believe the real inmates had a
Hollywood ending, you want to believe they lived happily ever after.”

Esslinger visited the set while the “Alcatraz” crew
was in San Francisco to shoot the pilot episode (ensuing episodes are
being shot in Vancouver) and came away believing that the show will
spike public interest in the island that is already maxed out as a
tourist site with 1.4 million visitors annually.

“Alcatraz is a historical gem,” he says. “And I
expect that viewers will want to peek behind the stage curtain to get a
real glimpse of the ingredients that formulate the mystery and
intrigue.”

Alexandra Picavet, a public affairs officer for the
National Park Service, says curious tourists inquire on about Alcatraz’s
connections to Hollywood on a daily basis.

“They wonder, for example, where the underground
(ore-cart) tunnels that they saw in ‘The Rock’ are located,” she said.
“They’re never surprised that they don’t get to see them, but they’re
very surprised to learn that they never existed.”

Still, Picavet believes there’s a benefit to having the image of Alcatraz playing upon the big and small screens.

“Hopefully, viewers will be inspired to visit
Alcatraz for themselves and to delve into some of its history,” she
said. “I think they’ll find that it’s just as fascinating as anything
Hollywood can make up.”

SPOTLIGHT ON THE ROCK

Through the years, Alcatraz island has repeatedly played a role in popular culture.

Various TV shows have referenced Alcatraz. Even “The
Simpsons” were incarcerated there in a Season 15 episode. Also, the
reality series, “Ghost Hunters” devoted an episode to finding paranormal
activity on the island.

In the videogame, “Alcatraz: Prison Break,” players are challenged to test their survival skills.