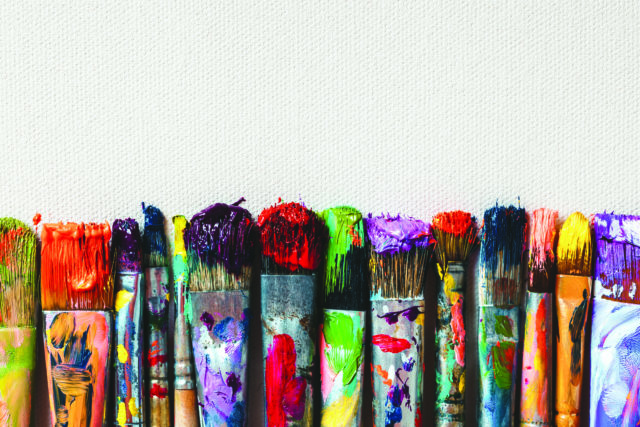 With the popularity of sourdough on the rise, many are turning to the baking expertise of Sarah Owens, who won a James Beard Award for her first book, Sourdough. She’ll be joined by Andy Clark, owner of Moxie Bread Co. in Louisville, to discuss the joys of sourdough baking and the benefits of heirloom grains. Tickets are $5 (plus a small convenience fee) for the access link to this virtual event. This access link will be sent the morning of the event (Thursday, June 18). You can purchase this on Eventbrite: OwensBBS.eventbrite.com.

Stretch out and enjoy some tunes in the cozy confines of your own home, backyard or wherever you have access to Facebook. On June 18, Hazel Miller & the Collective will be broadcasting live from Stewart Auditorium. Don’t miss this free event.

Support Longmont’s creative community at the ArtWalk Strongmont Virtual Artist Market series. The ArtWalk Strongmont markets provide an interactive portal to each artist’s live event. Viewers are invited to visit each artist’s studio to watch them create art live, as well as purchase from their online shop, all from the comfort and safety of their homes. 15% of all sales will be donated to The Firehouse Art Center.

Lifestory Writing Groups offer an opportunity for you to write — and share — your life stories in a group setting. This two-hour workshop will introduce you to free-writing and sharing your life and experiences. Contact Jean Unger: lifestoryjean <at> gmail <dot> com. Price: $25 — Zoom link will be emailed once registration is complete

This three-day series will address race-relation reconciliation. Registration on Eventbrite.

Kick off Pride by joining Out Boulder County and the Longmont Public Library for Rainbow Storytime, an LGBTQ book reading for children and families. The reading will take place on Facebook Live at facebook.com/OutBoulderPride.

Jotería is a board game that reflects Mexico’s LGBT community, providing education on LGBT terms and their history, from pre-colonial to modern time. Join in the fun for a virtual game via Zoom. Boards and all other relevant information will be emailed to participants. To RSVP, please email Juan Moreno at jmoreno@outboulder.org.

Topics will include local and regional resources for LGBTQ youth, the importance of pronouns and pronoun etiquette, inclusive sex education tips, safe binding for trans masculine youth, and some of the themes coming up in Out Boulder County’s LGBTQ youth groups. Please RSVP here.

Come enjoy the virtual company of fellow members of the LGBTQ and allied community. To RSVP, email Juan Moreno at jmoreno@outboulder.org. Join in 15 minutes before the event kicks off for a quick zoom tutorial.

Join in on Zoom to answer trivial about films that have made a significant impact in queer culture. First, second and third place winners will win prizes. To RSVP, contact Juan Moreno at  jmoreno@outboulder.org.

Decorate your cars, wear your favorite pride gear and ride down Main Street. Cars begin gathering at our designated meeting point at 9 a.m. The motorcade will officially run from 9:30-10:30 a.m. RSVP at outboulder.org.

HEAVY ROTATION: Five new tracks to kick off your summer

Though released in February, “Space Samba” screams summer from the first sun-bleached, flanged-out strum of Henry Carlyle Wade’s guitar. Blending funk, rock, disco and samba, the British four-piece creates a bright-eyed dance track that feels like it was plucked from the ’90s, given a Queer Eye-attention-to-detail makeover and unleashed on an unsuspecting 2020. “Disco volador” translates, literally, to “flying disc,” which the band says reflects “both feelings of flight and motion and the notion of human connectivity.”

Keleketla! is a collaborative musical project between British electronic duo Coldcut and a cadre of South African musicians. “Toyi toyi” is a rhythmic, stomping dance long used in political protests in South Africa; the movement united millions of black South Africans during anti-apartheid demonstrations, a weapon of sorts to intimidate police forces. This track — featuring the late, great Afrobeat drummer Tony Allen (a longtime member of Fela Kuti’s band) — places a revolutionary chant by hip-hop activists Soundz of the South over the minimalist, heavy bass of a gqom track by Durban producer DJ Mabheko. “Keleketla,” by the way, is a Sesotho and Setswana word which means “to participate,” as in get out there and keep making noise until things change.

British DJ Archie Fairhurst studied African American visual culture as a university student — his stage name is a nod to African American artist Romare Bearden, whose work in collage and photomontage inspired a young Fairhurst to take a similar approach with his music. “When you mix sound from different genres, cultures, continents or time periods,” Fairhurst told online magazine Huck, “that’s where you can create some real magic. That’s what makes it such a great way to get people to lose their prejudices.” They say sunshine is the best disinfectant, right? With deep bass and plucky synths, this track begs you to close your eyes, throw your fist in the air and dance like your life depends on it.

Nadine Shah’s husky voice leads you through this dark, minimal and driving song about being an outsider. The British singer cut her teeth in London singing in the Pizza Express Jazz Club in Soho, and studied art at university. Shah’s lyrics are refreshingly straight-forward: “Don’t you worry about what the neighbours think / They’re characters from kitchen sink / Forget about the can’t witches / Go sip and bunch of boring bitches.” In 2013 she told The Quietus that she’s inspired by the poetry of Phillip Larkin and the art of Frida Kahlo: “Frida Kahlo had a brutal honesty about her — almost too brutal of an honesty.”

The spacious vocals on this lead single from Sarah Jarosz’ new album, World on the Ground, are a perfect vehicle for the tale of a young woman who wanders off one evening to explore both the Texas land of her home and the landscape of her own mind. Jarosz’ new album is full of “name songs:” “Maggie,” “Johnny,” “Eve.” “Before this record, I had only written about myself and my feelings,” Jarosz told The Current. “Picking names opened that door to make up stories and to make them real by putting a name to it.”

It’s mid-June, which means we ought to be full swing into Chautauqua’s Summer of Silents — the annual celebration of cinema sans dialogue. And whether they’re accompanied by the incomparable Hank Troy or the impressive Mont Alto Motion Picture Orchestra, spending a warm summer evening in the grand Chautauqua barn with the sparkling images of the early-20th century is a thing of beauty. Hopefully, we’ll convene again next summer to continue the tradition. But in the meantime there’s plenty of silent cinema streaming out there to scratch the itch. Here are four comedies to start with because, frankly, we could use a laugh.

The Gold Rush Made in 1925, Charlie Chaplin’s greatest comedy is also his most recognizable. From the Little Tramp (Chaplin) woefully underdressed in the Klondike to hunger so intense he envisions his cabin-mate as a large roast chicken. But it’s the dance of the dinner rolls that has etched this film into the history books. When aspiring writer/producer/director Michael Powell saw the movie in France, he remembers the audience loving it so much they demanded the projectionist stop the film, roll it back and play the scene again. The projector obliged, and the young wanna-be filmmaker realized the importance of a real showstopper. Twenty years later, he would give the world his version in The Red Shoes. Streaming on The Criterion Channel, HBO Max and Kanopy.

Safety Last! Harold Lloyd’s Glasses character was a real go-getter. The middle-class boy next door could accomplish anything  he put his mind to. And it made him immensely popular with the rah-rah-rah mentality of the Roaring Twenties. 1923’s Safety Last! might be his best, and funniest, showing off skills in pantomime and daredevil theatrics. The first half of the film finds Lloyd working behind the counter in a chaotic department store — it’s a cyclone of women fighting for bolts of fabric and Lloyd’s attention. The second half of the movie finds Lloyd clinging to the outside of that store, inadvertently free climbing it as a stunt to drum up business. Everything imaginable gets in his way: Clocks, windows, robes, poles, ladders, pigeons… It’s a riot. Streaming on The Criterion Channel and HBO Max.

The General Chaplin was the tramp, Lloyd was the go-getter, and Buster Keaton was the Great Stone Face. He was unflappable, no matter how hard he got hit or how hard he fell. The General is his best, and maybe the greatest American movie ever made. It’s a Civil War comedy, with Keaton as the conductor of The General locomotive, a sought-after engine constantly under siege. Keaton keeps the motor running, no matter what. The movie is one death-defying stunt piece after another, and each is jaw-dropping by even today’s standards. Streaming on Amazon Prime and Kanopy.

Big Business Duo Stan Laurel and Oliver Hardy were among the few who successfully navigated the transition from silent to sound comedy, but their silent shorts remain their high-water mark. One of their best — at least available on streaming; Battle of the Century is a masterpiece but nowhere to be found — Big Business from 1929 finds the duo as door-to-door Christmas tree salesmen who call on a chap who really doesn’t want a Christmas tree. Things escalate slowly, and then very quickly, until Laurel and Hardy’s patented mayhem draws the attention of the neighborhood and a police officer. The two specialized in a brand of anarchy only The Muppets could mimic four decades later. Streaming on Amazon Prime.