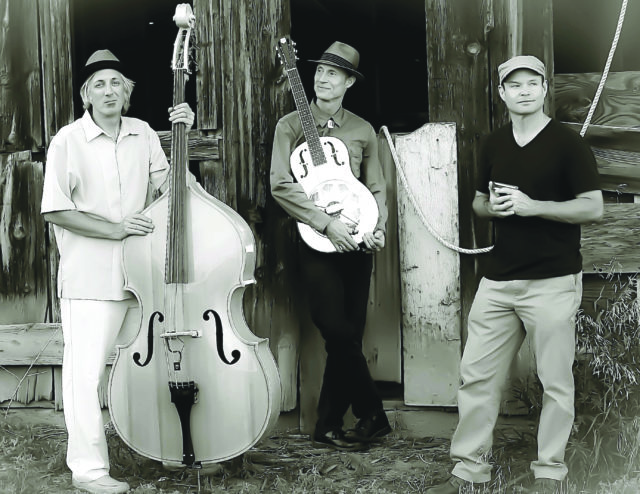 Enjoy a virtual concert from the Felonius Smith Trio live from Stewart Auditorium in Longmont on Thursday, June 25. Offering up pre-war blues music at its most authentic, the Felonius Smith Trio takes you back to a time when original bluesmen were pioneering a new musical style. These concerts — through July 30 —  are free. Simply visit the Longmont Museum’s Facebook page at 7:30 p.m. on the night of the concert and click on “videos” to join. Learn more at longmontmuseum.org or call 303-651-8374.

Join in for a weekend of free online playshops, panels and parties hosted by Diana Sabreen and The Big Dream. Build community based around playfulness, creativity and adventure, get inspired, and start living your own big dream. Head to thebigdream.life to see a schedule of events and register.

Members of the Infamous Stringdusters (Andy Hall and Chris Pandolf), Greensky Bluegrass (Paul Hoffman) and Leftover Salmon have joined together to form the Denver Bluegrass Allstars. The supergroup will perform live at Mighty Fine Productions in Denver with a free livestream on YouTube. Donations are encouraged, with a percentage of proceeds going to the newly launched Arnold Shultz Fund, designed to support activities increasing participation of people of color in bluegrass music.

Rufus Wainwright will present his new album, Unfollow The Rules: The Paramour Session, in a socially distanced acoustic concert from the iconic Paramour Mansion in Los Angeles. Tune in on Boulder Theater’s Facebook page at noon (Mountain Time) on Saturday, June 27 to watch the full show for free.

Resiliency Moments, a project by Denver-based performance art group The Clinic, connects artists from around the world with health care workers for a one-on-one, 30-minute creative experience designed to make the health care worker feel seen, heard and cared for. This panel will feature artists and health care workers addressing how art might address implicit bias and racial disparities in health care, and opportunities to scale up. Breakout groups will follow the panel conversation. Registration is required.

The Longmont Library’s Trashion Show is going virtual. Work on your own or as a team to create one or more fashion items from your household trash. Items can be clothing or accessories. Send the library a photo and or video of your creation to josie.brockmann@longmontcolorado.gov. Photos and/or videos are due on Monday, July 13. All ages are encouraged to participate. If you need trash, pick up a specially curated bag of (clean) trash at the Library’s Curbside Delivery station on the Library’s east side Monday through Saturday, 10 a.m. to 4 p.m. starting June 29.

Sustainability and the Arts for the Uninitiated. 7 p.m. Tuesday June 30 (and July 7) via Zoom.

In this online workshop, artist Ian Garrest will help dispel myths, assuage fears, and contextualize how to start thinking about eco-positive change across all aspects of the arts by addressing the challenges you anticipate or barriers you’re running up against. The Zoom meeting link will be sent the day prior to the workshop to all registered participants. Please arrive at 6:45 p.m. to settle in and address any issues with Zoom.

Five new tracks for your ears

Phoebe Bridgers has turned making you giggle while you cry into an art form. The video for “Garden Song” starts with Bridgers, clad in a matching pajama set, taking a healthy rip from a bong before launching into lyrics that dissect the complicated nature of nostalgia. The song never rises above a gentle whisper, but its effect is resounding: “I don’t know how but I’m taller / It must be something in the water / Everything’s growing in our garden / You don’t have to know that it’s haunted.” But just as you feel the gloom settling over you, Bridgers cracks a joke: “The doctor put her hands over my liver / And she told me my resentment’s getting smaller.”

‘Damsel in Distress,’ by Rufus Wainwright

After Rufus Wainwright and his husband, Jörn Weisbrodt, moved to Laurel Canyon, Weisbrodt became obsessed with the music of one of the Los Angeles neighborhood’s most iconic troubadours, Joni Mitchell. Wainwright admittedly wasn’t that familiar with Mitchell’s work, but after taking “a journey into her music” with Weisbrodt (and meeting the Canadian folk singer), he was hooked. “Damsel in Distress” is Wainwright’s tribute to Mitchell, an effortlessly soaring song about a damaged relationship. The track rides the same line between delicate and sturdy that’s a hallmark of Mitchell’s compositions, evoking visions of sunlight dappled through California bay laurel leaves. Wainwright is deceptive in his delivery; it might feel like sunlight on your face, but it’s actually the heat of a fiery anger.

Music journalists like to use the word “provocative” to describe Jehnny Beth’s music, first as the lead singer of British-based post-punk outfit Savages, and now with the release of her first solo album, To Love is to Live. But provocation indicates Beth writes music to inflame, when it seems evident she writes music to speak truth to power — for catharsis and connection. To Love is to Live is a deeply sensitive album driven by an urgency that overtook Beth after David Bowie died; rock star or not, everyone joins the great majority. “Heroine” channels the dark electronic groove of Nine Inch Nails (who Beth was set to open for in a now-canceled fall tour) with a message of self-confidence, no outside approval necessary: “All I want is some good tunes, and my great body / All I want is to feel me come the way I love and only I can do it / All I want is … to be a heroine.”

Rising Compton rapper Buddy (a nickname Simmie Sims III has had since childhood) gets down to brass tacks on “Black 2,” calling out the endless ways white America has appropriated and profited from black culture without having to deal with the dangerous realities of actually being black in America. “Everybody tryna get dreads and shit, but they ain’t African / All the light girls gettin’ the tan so they can darken they skin.” Let the wrecking ball hit you in the chorus and deposit you in the Land of Real Talk.

Gabriella Wilson is only 22 years old, but her voice and lyrics draw from a deep well of wisdom. Her stage moniker, H.E.R., stands for Having Everything Revealed, which Wilson does on her new single “I Can’t Breathe,” simultaneously a eulogy and a protest song. Wilson’s soulful voice carries us through the first two verses, but then she dips into spoken word to drive the message home in the third: “We are fed up eating your shit / Because you think your so-called ‘black friend’ / Validates your wokeness and erases your racism / That kind of uncomfortable conversation is too hard for your trust-fund pockets to swallow / To swallow the strange fruit hanging from my family tree … Do not say you do not see color / When you see us, see us / We can’t breathe.”

A lecture may get your point across, but a story illustrates it better. And if you can smuggle in a little humor, it’s a better bet the medicine will go down. Irresistible (reviewed on page 20) got you hankering for more? Here are four to stream right now.

Cold Turkey: Craving some much needed positive PR, the Valiant Tobacco Company announces a cockamamie scheme: Any American town that can give up smoking for one month will win $25 million, tax-free. Eagle Rock, Iowa — population 4,000 — needs that kind of coin to revamp Main Street and attract a military missile factory that will bring industry and life back to their dying Midwestern town. At least that’s what Rev. Brooks (Dick Van Dyke) hopes happens. Valiant’s PR man (Bob Newhart) sure hopes it doesn’t. Director Norman Lear was a titan of television, but Cold Turkey remains his lone cinematic effort. He made it in 1969, but the movie was shelved for two years because the studio feared it would piss off advertisers. They were right, but so was Lear: His vision of consumers, marketers and politicians all in bed together is as relevant now as it was then. Streaming on Fubu and Watch TCM.

The Death of Stalin: Multi-hyphenate Armando Iannucci might be the best working satirist today (all seven seasons of Veep are streaming on HBO Max and DirecTV). His take on the transfer of power in the USSR circa 1953 is so loaded with jokes you have to watch it twice to get it all. From backstabbing to assassination, pajamas and concert recordings, it all seems so terribly trivial until it’s all so terribly real. It’s like Mean Girls, only with the fate of millions hanging in the balance. The cast is top-notch, but Jason Isaacs steals the show. Streaming on Netflix and DirecTV.

Catch-22: George Clooney’s 2019 adaptation for Hulu was faithful to Joseph Heller’s novel until it missed the mark. He condemned Yossarian to a Sisyphean hell rather than set him free and off into the world. Clooney’s deviation probably comes from a weariness of the industrial-military complex — placing America forever in that bombardier bubble with a naked and shivering Yossarian. Mike Nichols’ 1970 adaptation of the book hews closer to Heller’s intent, running its motor on humor rather than coasting on resignation. Alan Arkin plays Captain John Yossarian, and Bob Newhart steps into the shoes of Maj. Major Major — it’s a hoot. Streaming on Amazon Prime and Pluto TV.

WALL-E: What starts as a charming love story between two lonely robots à la Chaplin’s City Lights gives way to some serious castigation once humans are involved. The consumer world hasn’t just destroyed the planet; it’s turned individuals into mindless bulbous masses existing only to buy more — pretty sharp stuff for a kid’s movie. Then again, if you want to change the future, you start with the present. And where most satires end on a note of deflation (see the above), or destruction (Dr. Strangelove, Blazing Saddles, etc.), WALL-E is one of the few that closes on a note of profound hope. And a Peter Gabriel song during the credits doesn’t hurt either. Streaming on Disney+.

A little film about lovely people