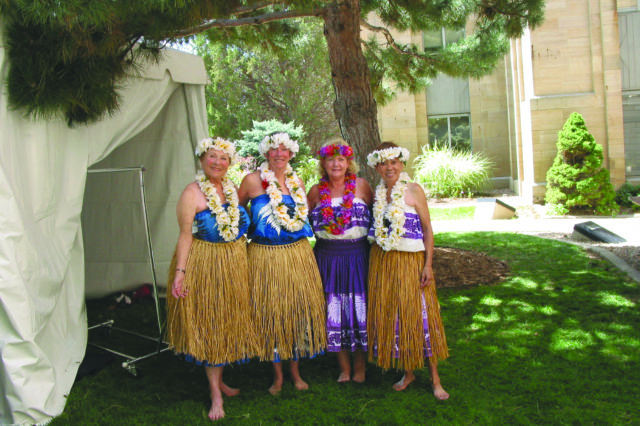 Feeling nervous about Friday the 13th? More like excited. Leonard E. Barrett Jr. will serenade you with the sounds of Frank Sinatra under the stars on the rooftop of Museum of Boulder. With snacks and beverages available from T/ACO, you’re set up for an enchanting event. Barrett promises to roll out the “big band tracks” version of Sinatra’s catalog, “respectfully delivered.”

American Humane’s inaugural 90-minute documentary throws a vitally important spotlight on critical efforts that may be among the last, best chances to save one million species on the verge of a catastrophic mass extinction. Narrated by Academy-, Tony- and Emmy-award winner Helen Mirren, the film examines the work of the major zoological organizations that are racing against the clock to preserve the million species disappearing in today’s mass extinction. Included with this online film rental is a discussion with Matthew Brady, director/producer, and Dr. Robin Ganzert, CEO of American Humane.

Following the death of her sister Tilly, Agnes Evans discovers Tilly’s Dungeons & Dragons notebook, launching a quest into the imaginary world that was her sister’s refuge. Laden with homicidal fairies, nasty ogres and ’90s pop culture references, She Kills Monsters is an action-packed, hilarious homage to the geek and warrior in all our hearts. Presented by CU Boulder Theatre & Dance, this iteration of She Kills Monsters was adapted by playwright Qui Nguyen specifically to be performed in the virtual realms of online performance. (Please note: This production contains adult language and explores themes of grief, violence and sexuality.)

Boulder Philharmonic Artistic Partner and audience favorite Simone Dinnerstein rocketed to international fame following the phenomenal success of her debut recording of Bach’s Goldberg Variations. Written for harpsichord, one imagines Bach would be delighted to hear his works brought to life on a modern piano. Flutist Christina Jennings joins Simone for two of the composer’s best-known works.

This is the classic, heart-rending tale of an intimate group of bohemian artists trying to survive in 1830s Paris, updated to COVID-era 2020. The lives of the poet Rodolfo, his painter best friend, Marcello (along with Marcello’s full-time singer/sometime girlfriend, Musetta), up-for-anything musician, Schaunard, and the stuffy-but-loveable philosopher, Colline, change forever when Mimì, a neighboring seamstress, knocks on the door. Through them we encounter loyalty, humor, forgiveness, passion, tragedy and love. This is an abridged version of La Bohème sung in Italian with subtitles featuring Steven Aguiló-Arbues at the piano. Attendance is limited and guests must wear masks unless seated at their table.

Looking for a taste of Paradise during these unprecedented times? Miriam Paisner, founder of Hula School of the Western Mountains, is relaunching her weekly Sunday hula class for beginners at A Place To Be Studio. Paisner teaches kahiko (ancient) and ‘auana (modern) hula and oli (chant), and her classes provide a primer for Hawaiian dance, music and culture. Drop-ins are welcome — just bring your mask and keep six feet between you and your new hula pals.

Arise Online invites you to enjoy a high-quality production of electronic music, live painting, interviews, interactive chats and virtual hangouts from the comfort of your own home — or from the comfort of A-Lodge in Boulder. Music comes courtesy of Spectacle, a two-piece outfit hailing from Denver. The duo bring a multi-dimensional sound to their brand of electronica, incorporating jazz, funk, classical, Afro-Cuban beats and live instrumentation. Joining Spectacle is self-taught artist Laura McGowan, who developed her passion for painting after an incident permanently damaged her vision. Arise has teamed up with Boulder’s adventure-centric hotel, A-Lodge, to provide an elevated online streaming experience for a limited number of patrons. Those looking to keep the party at home can grab a $10 ticket and catch the show on NoCapShows.com. (A portion of the proceeds will benefit Sweet Relief Musicians Fund.) Viewers can upgrade their ticket to meet the band after the show with a one-on-one virtual meet and greet on Arcivr.com.

Alexandra Grant is a Los Angeles-based artist who explores ideas of translation, identity and social responsibility through text and language in various media, including painting, drawing, sculpture, film and photography. Local Theater Company invites you to virtually step inside Grant’s studio for a conversation on her creative process, her philanthropic project grantLOVE, and her current show, Telepathy is One Step Further Than Empathy, currently on view at the Orange County Museum of Art. Tickets are available through EventBrite.

About halfway through Sarah Polley’s 2013 documentary Stories We Tell, Michael Polley turns to his daughter and asked, “What is this documentary about?”

Well, it’s about stories and, as Melissa Tamminga adds, “Storytelling.”

In addition to writing film criticism for Seattle Screen Scene, Tamminga teaches English and film studies at Whatcom Community College. And Polley’s doc, Stories We Tell — airing Nov. 17 on TCM — is a favorite of hers to program, and not just because it’s a “personal story about a family that’s deeply engaging.”

“But [Stories We Tell] also comes in a really abstract level about what it means to tell a story in the first place,” Tamminga says. “Who should be telling a story? What are the ethics of documentary filmmaking?”

But first, we better answer Michael Polley’s question: Stories We Tell is a documentary by way of a family secret. For decades, Sarah Polley’s older siblings teased her that her father wasn’t their father — that she was the product of an affair her mother, Diane, had with another man. And though Diane died in 1990, when Sarah was 11, the teasing did not. So, Sarah started looking for the truth. But no matter where she turned, she found hard facts and false bottoms. Both give Stories We Tell its shape and form, but, as Tamminga says, “The way that she interplays those two things,” is what makes it memorable.

It’s what draws Tamminga to appreciate and teach Stories We Tell — the emphasis on editing, the structure and shape of storytelling, and how Polley weaves together reenactments, archival footage and multiple perspectives in the doc.

“The film demonstrates to us that we just accept images that we see on the screen, as kind of what they purport to be without really questioning,” Tamminga adds.

It makes Stories We Tell a powerful work, but a slippery one, too, thanks to multiple on-screen narrations. From “the narrators [family members] that are telling us their version of the events,” to, “the camera itself as a narrator [which is] also telling us a version of the of the story,” Tamminga says.

Stories We Tell came out in 2013, a few years before the terms fake news and deepfakes entered the lexicon. You could apply both to Stories We Tell, and you’d be correct. But it would also be reductive.

“Polly threads the needle in a really interesting way where you do get the sense that there are things we will never be able to know or understand,” Tamminga says. “And, yet, there are ways to represent as much of the multifaceted reality that is still somehow truthful, but with also accepting the idea that it’s not necessarily going to encompass every single aspect of the truth.”

And it’s spectacular — Stories We Tell airs on TCM at 7:15 p.m. Tuesday, Nov. 17, as part of their 14-week Women Make Film Series. For more on Melissa Tamminga and to read her writings, follow @OneAprilDay.