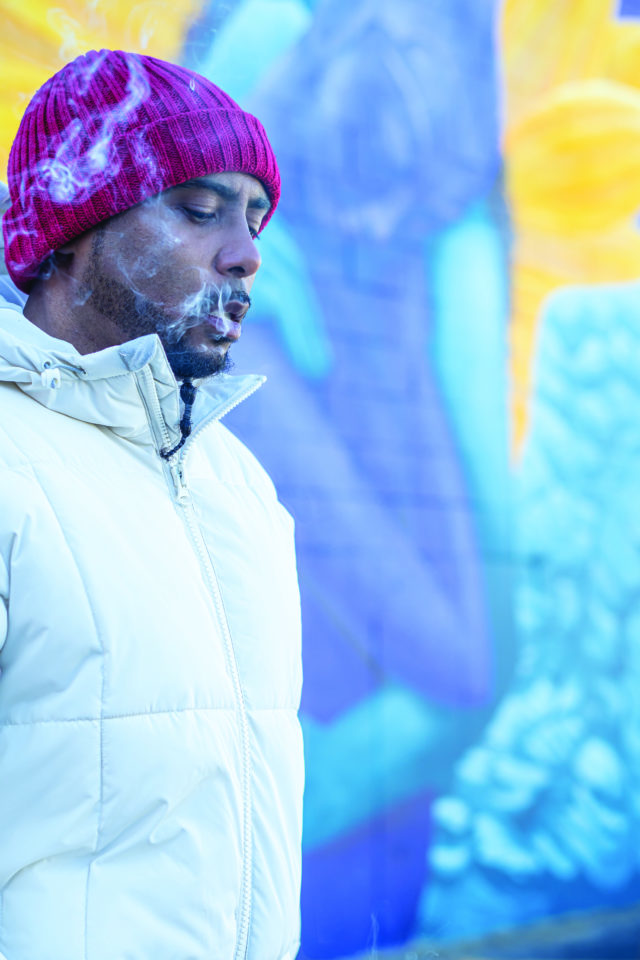 Donny Scott, known professionally as Donny Goines, is the low-key, high-talent artist whose sound you’ve been wishing would pulse through your headphones all year. From big orchestral baselines that hit hard, to subtler, stripped-down sounds, Goines’ wide artistic range is artfully connected by his lyrics, which take on issues like domestic violence, racial injustice and mental health.

Goines settled in Boulder nearly three years ago, looking for a change — some space to heal — and a chance to break into the cannabis industry, specifically as an advocate for the plant’s use in mental health.

But it’s been a long road to Boulder.

Growing up in the Bronx in the ’80s, Goines is a self-described “New Yorker to the core” when it comes to his early influences, citing heavy New York hitters like Biggie, Nas and Tupac Shakur (who was born in Manhattan before relocating to San Francisco as a teenager in the late ’80s). It’s easy to hear their impact in Goines’ tracks, particularly in the poetic way he attacks complex subject matter.

“Their sound really resonated with me and helped to sharpen my pencil and fine tune my writing skills,” Goines says recently in a phone interview. “I focused a lot on lyricism, and it’s what I know and love to this day.”

Goines’ stage name is borrowed from the author Donald Goines, whose fiction offers gritty depictions of the toughest aspects of the black experience in America. Novels like Whoreson, Dopefiend and Black Girl Lost pull directly from the author’s personal experience with a lifetime of heroin addiction, crime and incarceration. His influence on the hip-hop community is evident: Jay-Z, Nas, DMX, Ja-Rule, Wu Tang and more have mentioned the late author in songs and interviews.

Donny Goines also found a connection with the author’s words. As a teenager in the ’80s, and in a difficult family situation, Goines found himself incarcerated at Rikers Island. A seemingly impossible situation for a young person to be in, he describes the experience as his “beginning:”

“I was in Rikers when I was 16 for charges I ended up getting acquitted of. I was really just a kid trying to stay out of trouble and that was when someone gave me my first book by Donald Goines, Whoreson. It’s like… when I listened to rap when I was younger, it was like seeing a movie. Like, is this real? Can I believe this? But when someone wrote a book and was articulating what I had been living in the Bronx as a kid, it seemed more real to me, and I immediately felt connected to that. I ended up reading all of his books.”

Blast off in spaceships / Helmet on and can taste it / On the tip of my tongue the hopes and dreams / I’m takin’ flight with broken wings. (“I Am Moving,” off Goines’ debut album, 2008’s Minute After Midnight)

Sometimes dreamy and astral, sometimes gritty and real, Goines mined his deepest memories and emotions to create a vast discography ranging from depictions of his tumultuous childhood growing up in the Bronx to his dreams of escape, peace and freedom.

Goines initially garnered international attention toward the end of the 2000s, coming up with young producers like Disco D and Benny Blanco, and releasing collaborative tracks with artists like Kwamé and J. Cannon. Goines’ 2008 debut album, Minute After Midnight, uses beautiful and heart-rending lyrics to take a deep dive into his early life experiences:

Before I hit 18 I was brutalized / This made me come to school with knives / Only got worse when it brewed inside / Couldn’t lose my prize to suicide / But I figured that I’m a wild juvenile / And that was life or death, had to choose a side. (“Mountain of Memories”)

Despite stepping away from the spotlight in 2013, Goines’ talent has continued to permeate the artistic scene over the last decade, ranging from music to painting to photography. An advocate for mental health and the legalization of cannabis as a means to facilitate it, Goines relocated to Boulder seeking healing; after losing his newborn son nearly 15 years ago it was, he says, a long time coming.

“When bad things happen, people tend to say really cliché things, like, ‘It’s gonna make you stronger,’ but it really doesn’t,” Goines says. “There’s just a big hole in my heart. It’s one of the reasons I moved to Boulder, to help with my mental health. During that time [when I lost my son], I was coming up in the industry with Disco D and Benny Blanco. I remember [the three of us] sitting there on the floor together making music… and then my son died. And I wasn’t as interested [in making music] anymore. I was writing dark records while Benny was writing pop. All my music had a dark cloud looming over it. And I think that cloud will always loom. I would have given all the music and art and everything up if I could have him here.”

In terms of his recent artistic pursuits and moving into other realms, Goines stresses that, above all, he is not one singular thing. The broad label of “artist” is the one he prefers, and what he’s looking toward in the future.

This past summer, he released one of his first studio projects in eight years, a track entitled “Black America” with a charged music video to accompany it, featuring the words of Martin Luther King Jr. and showing Goines being lynched with an American flag while he raps:

To be black in this country / you ask me? It’s ugly / slave with no chains but they captured and hung me / my statements are honest / the Godless in Congress / who gives a ** about charges / when the pigs use my pigment for charges.

“I’ve been harassed by police and beaten up, and experienced racism in the military,” Goines says of the track. “When the BLM movement came up, I felt like I had to say something. It would be wrong if I didn’t. It came to me like any other song, easy and clear, and very much centered around Black Lives Matter.”

“I’ve been here almost three years but I still feel like an outsider, and like, it’s hard for people to see me as a person,” Goines says. “This city is not as liberal as it’s made out to be. I’ve been called the n-word to my face out here. I love Boulder, this is my town too, and I love it. But when you’re the only person you know like yourself in a place, it’s hard to connect.”

Boulder’s music scene, he says, is just about as diverse as the city; a lot of EDM, folk and jam bands come through town, and while Goines professes a deep love for all music, he can’t deny how badly he wants the hip-hop scene to flourish here. For him, variety is everything: “You shouldn’t limit yourself to just one or even a few sounds.”

Looking into the new year, Goines says, he would like to get back to making music while still advocating for cannabis use to aid in mental health and wellness.

“I’m trying so hard to advocate for (cannabis),” he says. “It’s been a great source of relief for my anxiety and depression. I think a lot of people don’t understand how much it helps people dealing with these issues.”

Aside from his mental health advocacy, Goines’ desire to get back into the studio is definitely on the horizon — before the COVID-19 pandemic hit the U.S. back in March, he was already working on a new album which was, of course, put on hold indefinitely. That being said, Goines isn’t discouraged.

“I always create music, even when I’m not putting it out,” he says. “The new music I’m working on is really a true reflection of who I am now, and my newfound beliefs and thoughts; you can expect different styles, concepts and introspective lyricism and songwriting. One of the main reasons I stepped away from music was because I’ve been on a path of healing and discovery. Now that my wounds have been tended to, I can really share with others what’s on my mind and heart. I’m just pouring my soul into what’s coming next.”

ON THE BILL: Donny Goines’ music can be found on Spotify, YouTube and Apple Music.