From the parking lot, Armburst is a pretty unassuming gym, situated in a shopping center in Wheat Ridge, flanked by a car rental business and a livestock feed store. But inside it’s clear this isn’t a gym for the flighty New Year’s Resolution crowd. A woman in a pair of lime-green shorts catches my eye as I walk through the door, her body a highly chiseled work of art that makes me question whether Michaelangelo’s David even bothered to count his macros.

On the walls of the gym’s main room, between pictures of Arnold Schwarzenegger and Phil Heath, is a sign that reads “Armburst Pro Gym: The Mile High Mecca.”

Wearing jeans and a thin layer of sweat, I’m a little out of place, surrounded by people who have probably spent more time in this gym today than I’ve spent in a gym in the past month. One of those people is Matt Helms, a 28-year-old novice in the bodybuilding world.

The fact that Helms likes to lift heavy stuff and put it down isn’t really news (though in only a year-and-a-half of training, Helms has competed in two National Physique Committee contests and walked away both times with fairly good rankings for a noob). What sets Helms apart from other bodybuilders is that he’s also a professional ballet dancer. And has a fifth-degree black belt in karate. And, right around one half-lifetime ago, was a child actor who clocked screen time with Mel Gibson and Martin Lawrence.

At 6-foot-1 with floppy brown hair and a charmingly crooked smile, Helms looks the part of the all-American guy, on top of being the best at practically everything he’s ever tried. It would be annoying if he weren’t the real deal, a genuinely nice person, born and raised in Eastern North Carolina with corresponding Southern manners.

Helms greets me and leads us through the main room to the racks of dumbells where his trainer, Allen “Watty Watt” Watkins, and training partner, Huy Tran, are waiting.

Watkins, a former MMA fighter turned sought-after trainer, nods to me in greeting and then gets straight to business.

There’s a lot of trash talking between these three, but it’s good-natured and productive, if trash talk can be productive. It matches their all-natural, no-steroids approach to bodybuilding. Today and for the past several months, Helms and Tran are training for the National Physique Committee (NPC) Colorado Muscle Classic, where, Helms explains, they will compete mostly against guys taking steroids. Still, Helms placed sixth out of 12 contestants in his first NPC competition last year — no steroids involved.

“All those fucking dudes are juiced up,” Watkins says as Tran finishes up a set of bench presses. “And you’re doing everything in your power to be natural. You took the harder route, but it’s the better route.”

Every path Helms chooses is the harder route. He adheres to strict diet, tightly monitoring macros — fat, protein, carbs, calories — and often practicing intermittent fasting for 16 to 20 hours a day.

Helms wakes up every day around 6 a.m. and cooks most of the food he’ll eat for the day, but he doesn’t eat yet; he’s got an hour or so of fasting cardio to do. He goes home for a nap after that, eventually eats at the 16-hour-fasting mark, then goes to the gym at his apartment complex for a couple of hours before having another bite to eat before bed. He tells me he’s managing to eat 4,000 calories this way. (Watkins, shocked by this news, instructs Helms to cut back to 2500 calories a day.) That’s a lot of calories, but it’s no fun: no breads, no sugar, very limited amounts of fruit, even. Helms is dreaming of the night after the NPC competition when he plans to gorge himself on Mexican, Italian and American fare at Golden Corral.

If Helms’ schedule sounds crazy, consider that this is his routine when his dance company, Boulder Ballet, is on break for the summer. When it’s ballet season, Helms adds between four and six hours in the studio to his schedule. He manages to teach dance, too, although when that happens seems to defy the rules of classic physics.

“Have you seen him dance?” Watkins asks. “He’s incredible.”

Just two weeks earlier I sat with Helms and the assistant artistic director of Boulder Ballet, Lance Hardin, in a studio at the Dairy Arts Center. Helms and his dance partner, Melissa Heslep, were preparing for a small show meant to introduce young children to ballet and theater. Their routine was only a few minutes long — performed to Isaac Albeniz’s “Tango in D major” — but Helms broke a serious sweat in their half-hour practice. 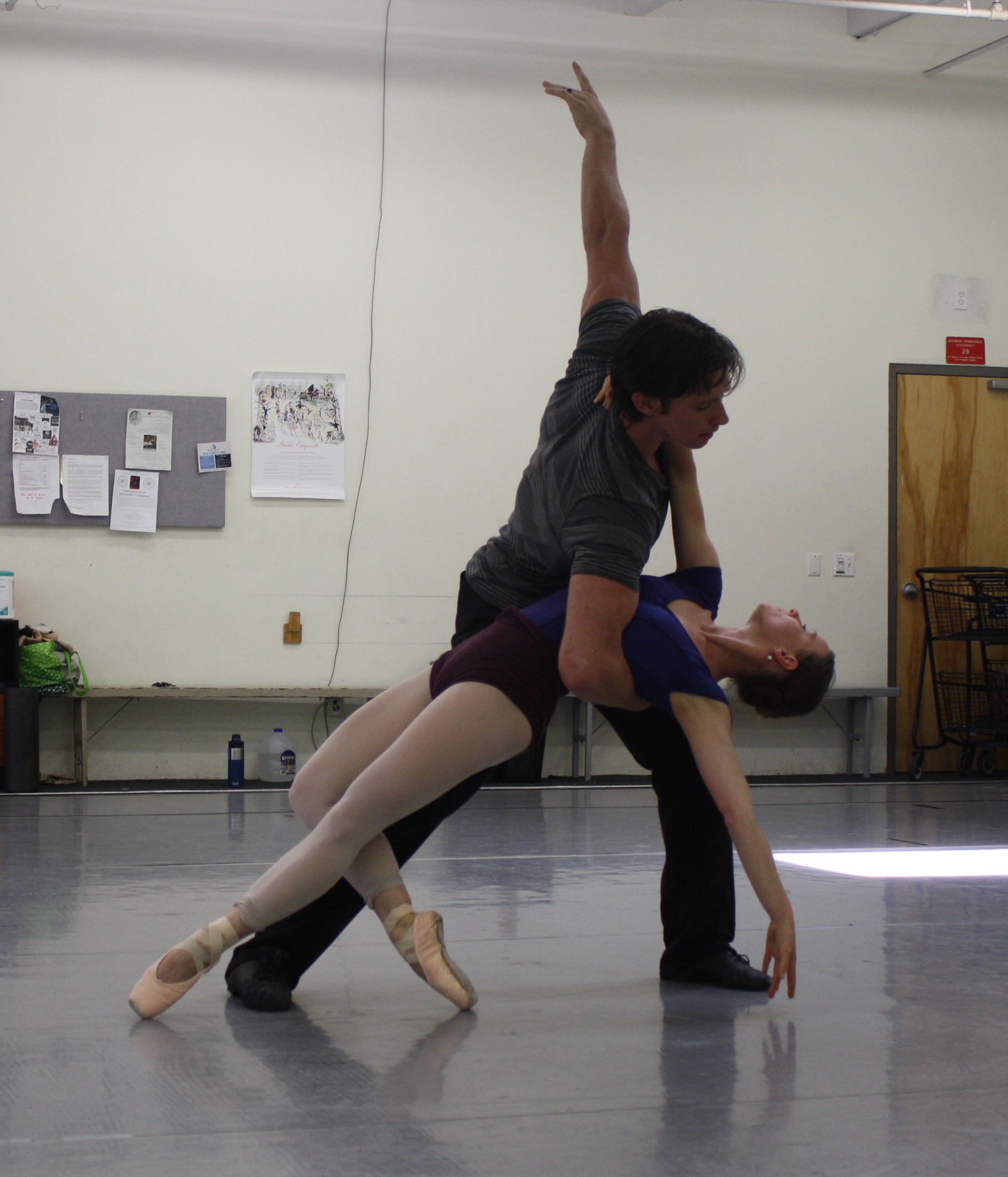 Hardin explains that the two have clocked only between five and seven days of rehearsal together over the course of a month-and-a-half. It’s summer and the company is off for the season. Everyone is involved with other projects — like preparing for the NPC Muscle Classic.

“What I think gives Matt a lot of success in his duel roles is flexibility,” Hardin tells me. “It’s ingrained in the [ballet] technique to stretch with every exercise. Better stretching, you breathe better, you contain your muscles better, engage better when it’s appropriate, so you ideally are becoming so in tune with your body that any variable is something that you might expect instead of being fearful of. It’s about fine-tuning the best instrument that we all have at our disposal.”

Helms has been fine-tuning his body since he was 3, when his mom enrolled him in martial arts classes. By 9, Helms had won nine consecutive world titles in competitive sport-karate and made his way to The Tonight Show with Jay Leno to talk about it. He caught the eye of talent agents and snagged roles in commercials and children’s programming before finally landing the small-but-standout role of Dennis in the 2003 horror flick Cabin Fever when he was around 13. Helms’ dad, Tony, had already taken a job in Colorado at this point and moved the family to Wheat Ridge.

By 15, Helms was wondering where to go next with martial arts. His instructor asked his mother to get the teen involved in something to improve his flexibility, and that’s where ballet came into play.

“My mother drug me into some hole-in-the-wall ballet school and I hated it,” Helms says. “I hated ballet. I did not want to do it. I thought it was the stupidest thing. But after receiving a fifth-degree black belt and being inducted into the Black Belt Hall of Fame (at the Martial Arts History Museum in Burbank, California) at 15, teaching since I was 9, I was like, what next?”

Starting three or four years later than even some of the older dancers, Helms saw something he loved about ballet more than he hated: a great challenge. In the summer of 2008, Helms attended Ballet West’s summer intensive program and was awarded a full scholarship to the Ballet West Academy in Salt Lake City, Utah, where he performed for several seasons.

Helms auditioned for Boulder Ballet in 2011 at the urging of a friend. He’s been a principal dancer in the company ever since, in Cinderella, Swan Lake and Copellia. He also played the lead male role in a movie version of The Nutcracker, filmed in Tennessee in 2011. He is a guest artist with several regional companies, including Centennial State Ballet in Longmont, Denver Academy of Ballet, Ballet Society in Colorado Springs, and the Academy of Classical Ballet in Arvada. And he often finds time (or creates it using black magic) to do guest performances with out-of-state companies in California, West Virginia and Tennessee.

But as it goes with Helms, last year he reached a point with ballet where he wondered, what’s next?

“When I started ballet I was the skinny, scrawny kid,” Helms says. “I just didn’t feel it was my fullest potential. I always had this idea that a male ballet dancer is like a statue, like a Greek god statue; it’s very noble, manly, robust, but it should also float like a feather. Hearing these terms and then growing up in marital arts, I wondered, how can I make this happen, because I don’t see it happening with a lot of people.”

Last year, Tran, a little brother figure if ever there was one, challenged Helms to do a NPC competition. The next one was about a month away, so they just started training.

Helms was always kind of an anomaly at the gym.

“The first time I went to the gym, lifting serious weight and then going over into the studio area and stretching, I was sitting in the splits, head down, eyes were closed, just tired, and someone tapped me on the shoulder. It was this big guy. He looked like he was on the football team or something and he goes, ‘Are you stuck? Are you OK?’”

It seems like a rare occasion when Matthew Helms gets stuck in much of any position. If things look stagnant, he devises a way to shift priorities and perspective. He placed fourth in his category in this year’s NPC Muscle Classic on Aug. 4, and he’s proud of that, but he and Watkins are re-evaluating his training during “off-season” to achieve what they hope will be greater gains for Helms’ next competition in 2019.

But what I really want to know is whether he ever got to chow down at Golden Corral.

“Actually not by my choice,” he writes via email. “It was decided to go to Cheesecake Factory where a lot of pastas, cakes and whiskey were the final hooray that night.”

A night free from counting carbs and calories? Sounds like a win.