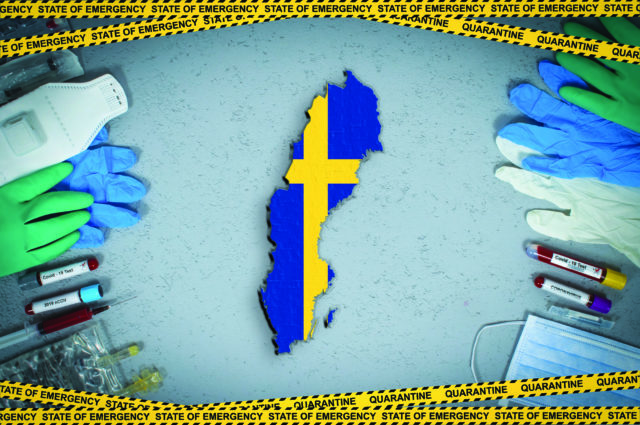 Living with her parents in their summer home in “the middle of nowhere forest in Sweden” was not what Siri Isaksson expected to be doing right now.

She was only going to visit Sweden for four days in mid-March before she took a trip to the U.S. to give some talks — Isaksson lives in Norway and is an assistant professor of behavioral economics at the Norwegian School of Economics — but then Norway enacted its lockdown, shutting its borders to the world and forcing Isaksson to make a decision about where she wanted to be: in Norway without her parents, or in Sweden with them.

The middle of nowhere Sweden it was.

That’s where she is when we connect via Skype. She took her parents from Stockholm to the remote summer home specifically to protect her 70-year-old mother, who has a lung disease. Isaksson has, from the beginning, been an outspoken opponent of Sweden’s strategy during the pandemic, a sort of social-distancing lite where most businesses, including schools, stay open, but the government asks the people to please use caution. Masks are not encouraged.

While the strategy seems to have garnered wide support from the Swedish citizenry, it’s also created one of the highest death tolls per capita in the world, with almost 40 deaths per 100,000 according to data from Johns Hopkins University. As of May 27, there have been 4,220 COVID-related deaths in Sweden.

“The Swedish policy is frequently defended by its proponents by the idea of trading lives today for speculative lives tomorrow,” Isaksson says. “And I actually don’t know if that’s false. I can’t tell you [whether that’s false] because the idea is that in the fall there’s going to be a second wave and that wave is going to be much harder than the first wave and if we have some immunity in our society, less people are going to die. … You’re speculating about a second wave, you’re speculating about immunity, you’re speculating about a lot of things. But I can tell you one thing that’s for sure: Those 4,000 people that are dead, they are dead. That’s for sure. They’re not coming back.

The Swedish model is often described as a plan to develop herd immunity, wherein a large enough portion of the population has developed resistance to an infection, either by direct contact with the virus or through a vaccine. But Isaksson says that’s a misunderstanding about the Swedish method, which actually intends to “flatten the curve” of infection.

“So our strategy is designed to never … overburden the health care system,” Isaksson says. “And from that perspective we have been successful. Herd immunity is something that comes as kind of a logical consequence because as you have people going through the infection, supposedly they get immunity. Now that’s debatable too. … We don’t know.

“Now, why I am critical … is because if you look at the data, just the data, you have 4,000 dead and you have 2,000 that have been treated in ICU. Now, what that tells me is you have so many people who get infected by this virus who are too fragile, either too old or they have underlying diseases, that you simply can’t put them on a ventilator. This is my talking point: What does it matter that we have capacity in our health care system if we can’t save the lives of those patients?”

Recently the Swedish Embassy in Washington, D.C., told NPR that while it’s still “far too early to draw any clear conclusions or comparisons connected to the coronavirus pandemic,” the country is open with the fact “that the strategy has failed to protect the elderly living in care homes.”

People over 70 who receive some sort of elderly care have made up 67% of those who have died from coronavirus in Sweden. Sweden’s Public Health Agency — its CDC — has consistently said outbreaks in these facilities is the reason for the country’s high death toll.

Isaksson doesn’t buy it. She calculates that removing 67% of the total deaths in Sweden still leaves more than 1,400 people dead who were not in elderly care facilities. Compared to the 236 deaths in Norway, that’s still six orders of magnitude more death in Sweden than in Norway.

Sweden’s lead epidemiologist, Anders Tegnell, seems to have a bit of a problem with math. Sweden’s Public Health Agency said in late March it expected about 25% of the population to have been infected by May 1. A late April study of 1,118 Stockholm residents showed only 7.3% had developed antibodies. Yet Tengell told CNN that number was just “a bit lower” than expected, “but not remarkably lower, maybe one or a couple of percent.”

“This comment made me very upset,” says Hannes Malmberg, a Swedish economist who teaches at the University of Minnesota. “I think that it shows that avoiding blame has become very important and that means that some clarity of communication has suffered quite a bit.”

Malmberg has worked directly with Tom Britton, a professor of mathematics who helped develop Sweden’s forecasting model. Britton has been clear that something is wrong with the original calculations and Sweden needs to go back to the drawing board. But Tegnell — who has taken on the role as Sweden’s defacto leader during the pandemic, with Prime Minister Stefan Löfven taking a backseat while the health official addresses the public during press conferences — has maintained that Sweden is on the right course, despite the death toll remaining fairly steady day after day.

“The Swedish strategy was predicated on the belief that the disease was impossible to stop,” Malmberg says. “And that might have been a good approximation to start with; it’s a respiratory disease, so it’s hard to stop, or even impossible to stop. Then they’d just be delaying trouble by doing very hard lockdowns — there might be a logic to that. You want [a strategy that’s] sustainable over the long run.

“But I think as more data has come in, it’s become clear that [other] countries have been able to stop this for several months. … The antibody studies are coming in, and we see that in New York only 20% had the disease even though there’s a massive amount of deaths. Sweden is at around 7% [of the total population with antibodies], Spain was 5%. I think that these data show that the disease kills a lot of people, not because everyone gets it, but because it’s dangerous and that tells you two things: A) that it’s possible to stop and B) that it’s more important to stop it.”

Malmberg says Sweden has failed to put appropriate resources into combatting the virus, failing to build up adequate testing. He worked quickly with five other Swedish researchers to write a white paper in late March detailing policy ideas that could help countries manage the pandemic. The paper focuses on slowing the spread of disease, protecting high-risk groups and leveraging idle portions of the workforce. The paper was given to the Swedish Public Health Agency.

“They didn’t care about that,” Malmberg says. “[The government gave the agency] $100 million and then nothing happened. And now two months down the road we’re still not anywhere close to the testing target,” of 100,000 tests a week.

Sweden is currently testing just over 30,000 people a week.

Malmberg and Isaksson aren’t the only researchers who are skeptical of Sweden’s strategy. In early April, more than 2,000 Swedish researchers and scientists signed an open letter calling for stronger action from the government.

While some have characterized Sweden’s model as a trade-off between disease and economic vitality, Malmberg doesn’t see it in quite such stark terms. Sweden is already suffering economically from the pandemic, even with businesses open.

“A lot of the damage to the economy comes from people voluntarily staying at home or avoiding interaction. It’s not policy. … But even though Sweden doesn’t have [strict policies in place], as long as the disease is still around, we’re going to be more cautious and that might turn out to be more damaging in the long run.”

He points out that Denmark and Norway have built up “a massive testing infrastructure,” that may give Sweden’s neighbors “a more open summer than we will have.”

Which invites another question: Will other Nordic nations — any nations, really — want to interact with Sweden as borders reopen and restrictions loosen?

Cyprus recently said it would not permit direct flights from Sweden when it opens its borders on June 9, but would allow inbound flights from Norway, Denmark and Finland.

“We’re a small export-dependent economy and we need to travel,” Malmberg says. “So I think it’s very important that we get the disease under control, but also do much more testing so we can show the world that we have it under control.”

With no contract tracing occurring in Sweden (Tegnell has said the value of contact tracing “has yet to be seen”), Malmberg says it will be “very hard to communicate and give confidence to authorities and other countries because we have so little information.”

The Brookings Institute did a study on the effect of COVID-19 and disease suppression policies on labor markets, using 20 wealthy countries — the Nordics among them — as subjects. The study found that while “preliminary results do not suggest any strong trade-off between disease suppression and economic performance … they do provide some evidence … that widespread testing and quarantine could substitute for severe restrictions on business and social life, as the pandemic unfolds.”

Sweden is projected to hit 10% unemployment by summer.

“We usually have tourists coming to Sweden in the summer,” Isaksson says. “Who the heck is going to come to Sweden? No one wants to come to Sweden. You gotta do something about the cause. You can’t just take care of the symptoms. Like, good luck dishing out a bunch of stimulus packages to keep businesses alive [when] people don’t start coming to those businesses.”

But for Isaksson the real concern is the loss of life — it’s why she’s in the middle of nowhere with her parents in Sweden. It’s why she takes to Twitter daily to call out the discrepancies in government reporting.

“[Early in the pandemic] I was listening to a [National Review] podcast called The Editors … and they were saying how the West was ‘whistling past a graveyard.’ And their argument just made so much sense to me. If [at that time] China’s doing all these things and they still have a lot of problems, this is not going to end well.”