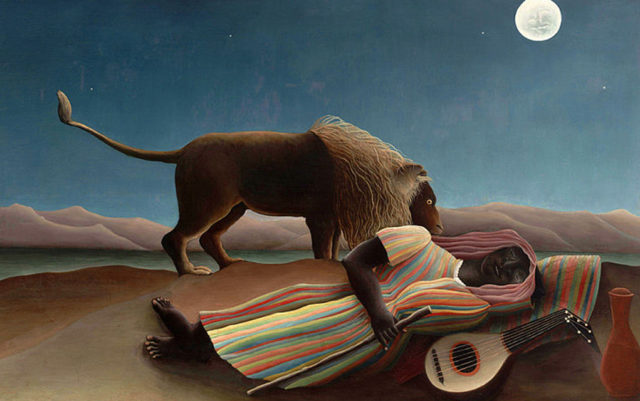 "The Sleeping Gypsy" by Henri Rousseau via Wikimedia Commons

Going back to bed
is the ultimate adult dream

Just a few hours promise
An honest man should be afforded the
courtesy of a schedule that suits him
The work always gets done no matter
Mind thus fuzzy it forgets what
it was thinking about when it was a-thinkin’
Feels like been drinking
Was there drinking?

A tables’ only as cozy as the chairs around it

A body makes pay with the dues provided it

Mumble your half-truth in order to save

You did it! You are not the father!

Not a father, barely an employee
More than the sum of dreams
Worthy of a minimum amount of sleep
to process information fairly and health
Feelings are hyper exhausting in themselves

Matthew Clifford tra-la-las around the Front Range taking himself way too seriously. You can find him at mattclifford.org