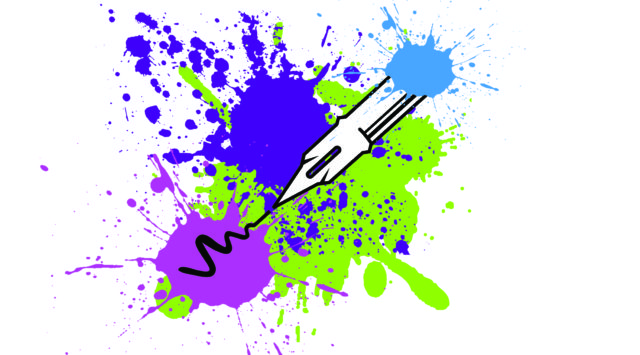 “Writer’s Block,” a poet at the mic says.

“Outside the box,” a poet from the audience shouts back.

“All dayyy!” half the audience responds.

I roll my eyes.

Writer’s Block is a local poetry community that came on the Boulder scene last spring. It’s a collective of mainly younger poets who hit up the local open mics, most notably the Tuesday night one, infecting it with their abundant energy, and swelling its sign-up sheet to an incredible 40 readers some weeks.

Their home base is the Block 1750 dance studio (in the strip mall just north of Best Buy on 30th), where they have a writing workshop at 9 p.m. every Wednesday, and every couple of months they hold their own open mic, which mixes poetry with freestyle dance performances (the next one is scheduled for April 25).

They have their own paper and staples publication called Spit Poet Zine with a third volume due in May.

And they have an official call-back: “All dayyy.”

As I watched them emerge this past year, I could only call to mind the ancient arts concept known as Itzbindunn.

I’ve been involved in the Boulder poetry scene for 15 years, which in local poetry years may convert to 150. Not that I’d be considered old, per se, but it means, with exceptions like Tom Peters’ So You’re a Poet series’ 30-year run (which itself has now transitioned from The Laughing Goat Coffeehouse to the Wesley Chapel on Mondays), that I’ve seen a lot of poets come (like Whitmanian exclamation points!) and go (on a never-ending line break).

It’s become a Sisyphean task to keep up with this town, where there’s always someone young and energetic starting the new thing while someone older and tired is ending the last new thing.

But Writer’s Block has become an undeniable force in the scene, even sucking some older, respected poets into their orbit, like Ira Liss, who invited me to “The Block” one Wednesday when he was hosting their workshop.

For most writing workshop groups you’d expect to see a handful of close friends quietly discussing their work, but the count was at least 25 that night, all gathered in the community space next to the dance studio. Surrounded by photos of Bruce Lee and slogans like “Come as you are” and “Only the different make a difference,” they sat on couches, beanbags, stools and easy chairs, eating from a plate of brownies fresh-baked from an in-house oven, while nostalgic dance hits from the likes of House of Pain and Lauryn Hill blared from the next room.

They seemed undistracted by (or maybe even inspired by) the noise, as Liss gave them writing prompts. Some even excused themselves in the middle to take a dance break.

Unlike a typical workshop, it seemed more about giving people the opportunity to write together, rather than any kind of lesson or critique. When it was time to share, Changa Hernandez, one of the core forces behind Writer’s Block, urged them on, saying, “Alright, who’s hungry?”

The eccentric-looking group, ranging from teenage to retired age, with their dyed teal hair, man-buns, Russian hats and mermaid leggings, all volunteered to read vulnerable pieces about love, social justice, mental health, fear and a world that generally lets you down, but with hope that all might change.

The themes were typical but no less profound. As they went around the circle, the audience was fully engaged, responding to the better lines and moments of honesty with snapping fingers and exclamations of “dope!” and “fire!” Everyone seemed equally supported and heard.

Watching them it was clear — they have IT.

IT is another ancient arts term for the feeling when something is so aligned with the energy of a moment, has so much rightness and momentum and destiny behind it that it could’ve been dictated by nothing else but The Gods. Even when the moment inevitably passes, it doesn’t matter; it only matters that you experienced IT when you could.

IT is the goal of every arts community.

The Writer’s Block participants have similar ideas on why IT might be happening there.

Spit Poet Zine editor Caito Foster calls Writer’s Block a “cool community of (mainly) asshole 20-somethings who want to learn how to write and are teaching each other. … Having a community of people to flow with… can be really helpful to open up.”

Many bring up the idea of safety.

For writer/musician Phoebe Nix, “It’s a place to go to share.  Sometimes it can be a little scary and more than I was prepared for, but every time it’s been a safe place.”

It seems to be tied into the community’s inclusiveness.

“It doesn’t matter who you are, what background,” poet Zoe Plait says, “you can host there.”

Many appreciate how there doesn’t feel like any kind of obvious hierarchy or leadership, although perhaps the leadership is just more subtle.

“Changa brings that energy wherever he goes, and we all come along,” Griff Wendland, another core Writer’s Block member, says.

Bard/toymaker K-Bo Cuts adds, “The only reason Changa’s our leader is ’cause he’s like the least leader person.”

Changa Hernandez is a floppy-haired, whispy-mustache, tan-skinned guy in his 20s, often seen wearing an Adidas tracksuit and hugging everyone he meets. Every week he’s an audience favorite at the open mic, killing it with freestyle rhymes in his charmingly thick accent.

His background is in dance, getting involved for the past eight years with the crew that eventually initiated Block 1750 a little over three years ago.

“A space for community” it says on the homepage of their website. Their mission statement reads, “Block 1750 is a nonprofit community space dedicated to supporting youth growth through various movement and arts-based communities in Colorado.”

It was just a little over a year ago that Hernandez started branching out to the poetry open mics and brought this spirit with him.

“I saw that the poetry thing in Boulder was incredible,” he says, “and I wanted to give something.”

What he gave it was a space.  At first, it was just a few poets coming to hang out and “train,” as Hernandez puts it. Then they wanted everyone to be a part of it. Once he gave it the name “Writer’s Block,” it started to take on a life of its own.

“I think it might just be the magic of the space,” Hernandez says. “This place has a history of a lot of dancers opening up in the craziest of ways. … It gives people a space where they’re comfortable and where we get to chill.”

Hernandez suggests there’s no real leader behind Writer’s Block. “Getting together and saying this is our space is one of the things that make it comfortable, so fuck leaders,” he says with a laugh.

But clearly it wouldn’t be happening without him, or co-organizer Lili Scathorn.

Hernandez confesses he’s “unreliable and disorganized,” but “Lili is dedicated as hell.”

She helps schedule workshop hosts, posts on social media and sends out emails. She’s also the one who came up with the call-back, which has helped brand the community.

“I was against the idea of having a call-back,” Hernandez says, “but people were doing it and were happy about it… now I fucking love it.”

In addition to future workshops and open mics, they have plans to start their own regular slam, possibly at Innisfree, although that can be an uphill climb in Boulder’s poetry culture, where free-spirited poets often seem more interested in seeking support rather than competing for scores. But perhaps with their energy, something might catch on this time.

Otherwise, “We’re playing it by ear, honestly,” Hernandez says. “Our goal is to bring poets together.”

Hernandez is humble about the mysterious IT Writer’s Block possesses. “It’s crazy to think I started anything… I just think after the mic we chill and it seems like, of course that’s what we do.”

It’s clear he never envisioned this; he was being himself and it just happened, and that’s probably why it happened.

Another Tuesday night rolls around at Innisfree and the crew is back.

“Writer’s Block,” a poet at the mic says.

“Outside the box,” another poet shouts from the audience.

“All dayyy!” half the audience shouts.

“What is that?” open mic host Emily Black asks them.

This time I have to nod.