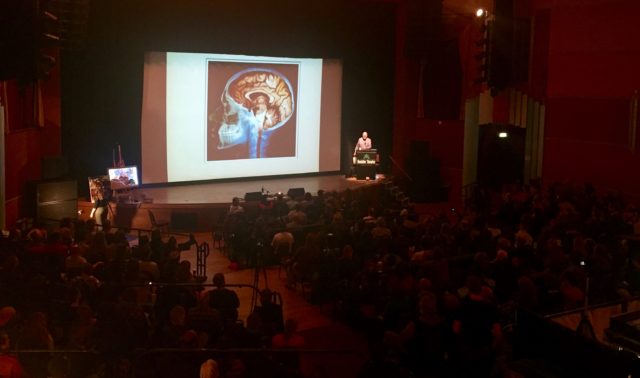 Close your eyes,” Daniel McQueen urges a crowd of more than 500 people at the Boulder Theater at the second annual Psychedelic Shine conference. “Imagine you are sitting on top of a rocket, shuttling into space.”

There is a long-standing comparison between deep space exploration of our outer and inner worlds: Just as astronauts exceed the boundaries of common knowledge by stepping into the unknown, so do psychonauts break the limits of conscious experience on their more inward trips.

Coincidentally or not, expeditions into both frontiers have been suppressed since the early 1970s. In 1971 President Nixon took steps to wind down the Apollo missions (manned missions to the moon) and also put the kibosh on drugs, declaring them “public enemy number one” and waging “an all out offensive.”

The fear surrounding these respective expeditions is understandable: They are inherently risky. But, as NASA writes on their website: “Humans are driven to explore the unknown, discover new worlds, push the boundaries of our scientific and technical limits, and then push further. The intangible desire to explore and challenge the boundaries of what we know and where we have been has provided benefits to our society for centuries.”

This rings especially true within the sun-filled Boulder Valley, where space and consciousness expeditions flourish despite low federal funding for space exploration and ongoing drug prohibition.

“Just like a rocket is a tool to take you beyond the Earth, a psychedelic is a tool to take you into the mind or soul,” McQueen says. “Psychedelics have a tendency to disrupt our homeostasis. They will blow our normal way of being out of the water and will replace it with clear seeing, seeing things as they really are and so that allows us to question deeply held assumptions. On a neurological level, there is some good evidence that it is rewiring our brain so that these deeply imposed beliefs are literally broken and repaired into a permanent understanding or awareness.”

The effects of the family of drugs are more or less the same, described as an expansion of consciousness, heightened cognition or thinking, and hallucinations.

Both chemically and physiologically, cannabis lies on the edges of the psychedelic family. It’s different enough to evade the wrath of prohibition and pave significant inroads in legalization, breaking down long-standing stigma along the way. But it’s similar enough that McQueen is hopeful cannabis can serve as a bridge in ongoing and future efforts to legalize and destigmatize psychedelics.

Already, McQueen attributes the current (albeit anecdotal) resurgence in psychedelic interest to the path that cannabis has paved. Although there aren’t any numbers to reliably quantify psychedelic use in the black market, there is a verifiable spike in privately funded psychedelic research from organizations like the Multidisciplinary Association for Psychedelic Studies, the Beckley Foundation and Heffter Research Institute.

Although sample sizes are chronically too small, research in psychedelics is showing promise in alleviating some conditions that have proven hardest to treat, like addiction, obsessive compulsive disorder, end-of-life anxiety and, in some cases, depression. The consistently strong results are increasing interest, funding and, with it, study size.

Dennis McKenna, keynote speaker at Psychedelic Shine and preeminent researcher of classic psychedelics, is not surprised that our ability to quantify and describe psychedelics lags behind our experience of them. Just like the astronauts have trouble articulating the discovery of such phenomenon like a black hole or synchronicity across vast space, he says, we can likewise expect language to break at the edges of consciousness.

We may well be experiencing a renaissance in our understanding of the universe and our place within it. But if history is any lesson, reaching such heights in understanding is met with resistance and opposition.

In 1967, there was the Summer of Love, and in 1971, the war on drugs was declared. In 1969, we landed the first man on the moon and only two years later, Nixon ended manned missions into space.

At last week’s swearing-in ceremony for Attorney General Jeff Sessions, President Trump said that drug cartels are “destroying the blood of our youth.” In the same week, he also issued three executive orders on crime and public safety, vowed to be “ruthless” against drug trafficking and made other statements signaling that he’s planning to ramp up the drug war.

Trump’s views on the future of deep space exploration remain a matter of conjecture. But next time you look up at the stars and remark at their awesomeness, remember the words of Dennis McKenna: “There are 100 to 500 trillion connections in the human brain … The Milky Way Galaxy contains about 100 billion stars. If each synapse in our brain is equated to a star, our brains are equivalent to 1,000 galaxies.”