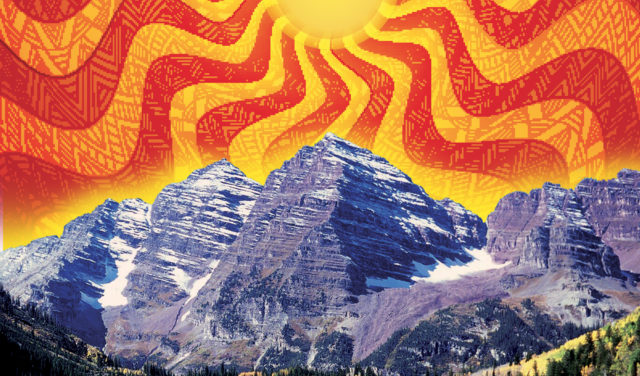 After the clouds engulfed us, we fanned across Mazama Ridge, seeking the narrow route between cliffs to Reflection Lakes. I dropped farthest off the crest. The skiers nearest became colored splotches, their neon jackets floating through the whiteout. The skier atop the ridge was reduced to a stick figure drifting in and out of sight.

Then disaster struck. The slope above broke loose, a blue seam opening where the slide began. Snow churned around my legs, forcing me down. “Avalanche!” I shouted heroically. “Save yourselves!”

But my teammates ignored my warning. Blurred though their faces were, they radiated skepticism. The snow hadn’t cascaded over me. I stood motionless on a stable crust, bellowing like a mad man. That threatening avalanche was all an illusion.

Across my years in the mountains, I’ve been afflicted by alpine visions. I’ve seen Dali-esque floating beasts and dodged UFOs whizzing past my skull. Once, a Dark Ages character constructed a hut from branches as I approached. Now, when I ask my friends if they’re seeing the marvelous apparitions I am, they just shake their heads and keep climbing.

My hallucinations, though flamboyant, aren’t unique. Tales of mountain illusions abound—even within my dubious team. Skiing Quandary Peak through clouds, one friend repeatedly bailed from an uncontrolled descent to find he’d barely been moving. Below Longs Peak’s summit, another acquaintance held an intense argument with his aunt, who was sitting comfortably in her Nebraska apartment. Descending far past midnight after a tortured Rainier summit day, my son traversed an imaginary forest, serenaded by warbling birds.

Ask climbers and skiers about their surreal encounters in the hills, and your conversation will fill an evening.

And while this looniness makes lively reminiscing, experiencing a waking dream when clarity is required carries its downsides. At 19,000 feet in Nepal, an exhausted friend unclipped from the team’s rope because they neared a grove of trees. As the rope slithered away, a cogent realization struck him: Those sheltering trees were all in his head. He stood alone in the fog, perched on a rocky spur. If his partner hadn’t felt the drag leave his harness and turned around, this hallucination would now be a cautionary tale

Why ordinary folks climb only to see and hear what isn’t there is a question with only partial answers. Navigating mountain terrain is confusing. Turning our horizontal plane on end plays havoc with perception. Stir in sculpted ice, rock spires and blinding snowfields, and alpine terrain forms a witches’ brew of misidentification. Some areas—let’s call them mountain vortexes—seem designed to cause misperception of the landscape. The Forest Service climbing guide to Mt. Hood, for example, notes that descending the fall line (as common sense tells you to) lands you far from home in Zigzag Canyon, not at your Timberline Lodge destination. The mountain’s very configuration baffles the senses.

Mountain hallucinations proper (what psychologists label “temporary psychosis”) occur when the brain incorrectly identifies the source of its experiences. We impose internal patterns on external scenes, overlaying an ambiguous landscape with structures developed in our minds.

Because engaging in mountain activities often pushes participants to their physical limits of dehydration, hunger, heat and cold, researchers have reasoned approaching those boundaries might generate bouts of psychosis. No connection between general physical disrepair and hallucinations has been discovered, but one common culprit has surfaced: very-high altitude (defined as elevations above 3500 meters). Recent studies of high-altitude ultra-marathoners and mountaineers all found high incidences of visual hallucinations among participants. Fourteen of 17 athletes in an Italian study experienced visual misinterpretations and “described the imaginative reworking of clouds, rocks, bushes, or trees, interpreting them as fantastic beasts, such as dragons, goblins, or gremlins.” Psychological Medicine’s 2018 study of mountaineers again identified high altitude as being a causal factor in hallucinations, with these hallucinations being a double-edge sword, consisting of “voices or people encouraging them [climbers] towards survival behaviour” but also at times suggesting “potential misjudgments of dangerous scenarios.“

Weather also has a dramatic effect, and I’d be remiss overlooking my bugaboo, the whiteout. Whiteouts take different forms, but the Cambridge Dictionary summarizes the effect nicely: “a surface weather condition in a snow-covered area (such as a polar region) in which no object casts a shadow, the horizon cannot be seen, and only dark objects are discernible.” Earth, air and sky become a uniform color, and visibility is sharply limited, creating a form of sensory deprivation. Numerous 1960s studies linked sensory deprivation to hallucinations, a circumstance described by psychiatrist Paul Fletcher in Wired Magazine in 2009: “When confronted by a lack of sensory patterns in our environment, we have a natural tendency to impose our own patterns.” Applying this thought to my avalanche that wasn’t, my eyes took the little I could see, added my anxiety, and from those scraps my brain produced images of impending doom.

These accumulated studies, though, aren’t definitive. Since people are similar physiologically, we’d expect more commonality than has been found in when we hallucinate. Personally, I appreciate this limitation to our understanding. Mountains are the domain of gods, so shouldn’t our visions there be prophecies, warnings or blessings, meaningful elements in the other-worldly landscape we heroes traverse on our journey?

Fortunately, a sub-category of mountaineering experience suggests our hallucinations do carry consequence. Imagine yourself, gasping insufficient air, navigating fog so thick your partners may as well not exist. From nowhere, a benevolent person appears, traveling, conversing, maybe even sharing a snack with you. Visions of this nature are so common they’ve earned a name—Third Man Syndrome—and they have occurred to many climbers, including renowned Himalayan mountaineers Doug Scott and Reinhold Messner.

When the Third Man appears, your visions carry a weight far beyond simple tricks of the light. They are supporting you in the most significant task of all: calming your fears, organizing your thoughts, and guiding you safely home.