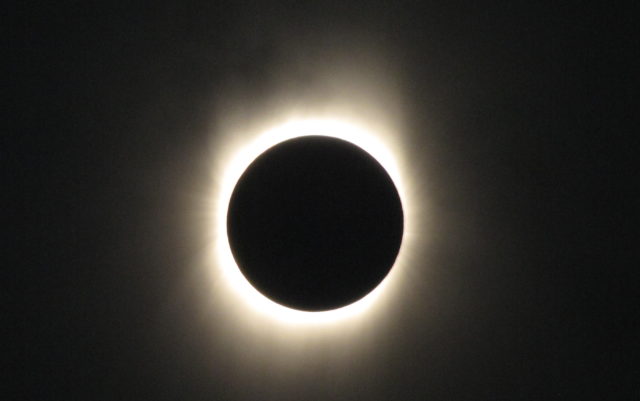 As seen from Earth, a solar eclipse takes place when the moon passes between the sun and Earth, partially or totally obscuring the sun. When serendipity delivers a perfect alignment, the moon blocks the entire disk of the sun causing a total solar eclipse, and for some brief minutes, bright daylight gives way to nighttime stars. When the brightness of the sun’s disk is obscured, its faint outer envelope is revealed. The sun’s tenuous corona is a spectacle in itself: sculptured by invisible magnetic forces, it draws harmonious lines that flow like the folds of a ballerina’s skirt as she performs her breathtaking choreography. A total solar eclipse renders speechless even the most articulate amongst us, who will barely manage to spew a cacophony of shrieks, squeals and howls.

A total eclipse is visible from somewhere on the Earth’s surface every 18 months on average, but at a given location, you will have to wait several hundred years to see one again. The last total solar eclipse over the lower 48 states happened on February 26, 1979. On August 21 of this year, the moon will cast its eerie shadow over a large strip of the country. A 70-mile-wide swath of darkness will travel at several thousand miles per hour from the Pacific to the Atlantic, making its first appearance in Oregon and progressing through the continent all the way to South Carolina.

Aside from the sheer beauty of the event, solar eclipses offer scientists a rare opportunity to observe the solar corona under pristine conditions that cannot be replicated with any man-made observational setup. Many scientific discoveries have been made during solar eclipses, from unveiling the structure, composition and physical properties of the sun’s outer atmosphere, to the verification of the theory of general relativity by measuring the bending of starlight due to gravity.

The solar physics community in the U.S. is thrilled to test their long-awaited experiments this coming August. Several Boulder-based groups are currently working hard to get their instruments ready in time for the eclipse.

The High Altitude Observatory (one of the laboratories of the National Center for Atmospheric Research, or NCAR) is building two instruments that will be deployed on a mountaintop near Casper, Wyoming. These experiments can observe the sun’s Corona in a complementary fashion. The NCAR interferometer will measure for the first time the extended infrared spectrum of the corona during a total eclipse, producing data that will provide a wealth of new information on the rarefied environment of the sun’s outer atmosphere. “We are surveying unknown territory in the infrared regions of the coronal spectrum‚” says Dr. Phil Judge with excitement.

A second experiment, led by the same team, will test a novel camera technology (PolarCam) inspired by the compound eye of the mantis shrimp, which is able to detect not only the intensity of light but also its state of polarization. The human eye is completely insensitive to polarized light, but many animals, such as the honey bee or the mantis shrimp, see the world through polarization filters. This experiment will not only provide valuable information about the magnetic forces that shape the sun’s corona, but will also serve as a testbed for new technology that could revolutionize future astronomical observations.

Another Boulder-based group from the Southwest Research Institute (SwRI) will conduct airborne observations of the eclipse. SwRI’s instruments will be looking at the sun from two NASA WB-57 airplanes that will fly along different sections of the eclipse path. This strategy will lengthen the duration of totality to about 8 minutes (the maximum duration of totality at a given site is less than a third of that), allowing scientists to measure changes in the corona at these longer timescales. But the sun is not the only object of desire for researchers during the eclipse. NASA’s aircraft will also measure the infrared signature from Mercury, enabling us to learn about the planet’s formation and its soil composition. And while in that neck of the woods, why not search for Vulcanoids? This hypothesized population of asteroids is believed to travel around the Sun inside the orbit of Mercury, but its existence has yet to be proved.

Ultimately, all of these observations will aid in the comprehension of the physical processes taking place in the Sun’s outer layers and will, according to Dr. Phil Judge, help us “understand the evolving magnetism on the Sun and its effects on Earth.”

The total phase of the August eclipse cannot be seen from anywhere in Colorado. Boulder will achieve almost 95 percent totality, which means that more than 5 percent of the sun will remain uncovered. “That’s a lot of light,” says Dr. Doug Duncan, CU Professor and director of the Fiske Planetarium. “Five percent of the sun is still 20,000 times brighter than the full moon.”

Although it may be tempting to not go through the hassle of traveling to the totality path, be advised that no partial eclipse bears even a meager comparison to the sublime magnificence of totality. A total eclipse is a unique, unforgettable experience that only a few privileged people (as percentage of the total population) get a chance to enjoy. The next opportunity to watch one in the continental U.S. will be in 2024.

Some useful tips: use eclipse glasses when looking at the sun during all phases of the partial eclipse, but if you’re in the path of totality, be sure to remove them during totality so that you can experience the Corona in all its glory. If you get a chance, watch the behavior of the wildlife around you. Just like humans, animals gaze at the eclipse in awe, for it is an extraordinary event when the world plunges into darkness twice in a day. And lastly, refrain from taking pictures during totality or you might miss it. Just savor those fleeting moments because you will remember them for the rest of your life.

Rebecca Centeno, Ph.D., is a solar physicist at the High Altitude Observatory of the National Center for Atmospheric Research in Boulder, Colorado.