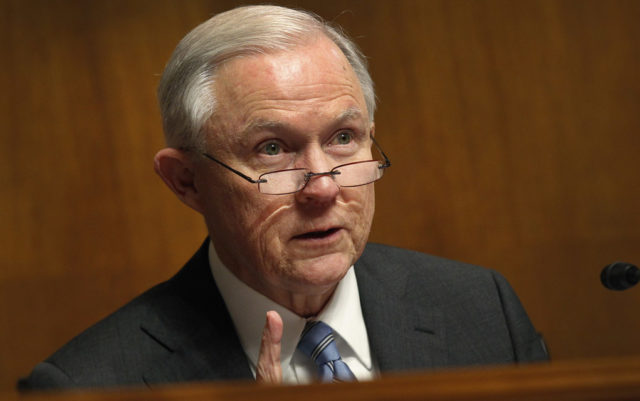 No, really, it moved just as I was limbering up my hunt-and-peck fingers to knock out this week’s rant. According to the San Francisco Chronicle, the Berkeley, California, City Council has voted unanimously to declare Berkeley a sanctuary city for legal adult-use marijuana.

The declaration prohibits city agencies and employees from turning over information on legal cannabis activities to the feds and from assisting in enforcing federal marijuana laws.

This is probably the first time a city has done this. Chances are it won’t be the last.

“I believe we can balance public safety and resisting the Trump administration,” Mayor Jesse Arreguin, a co-sponsor of the resolution, said at the Tuesday council meeting. “We’re keeping with the strong position Berkeley is [as] a sanctuary for people in our community.”

The resolution was drafted in response to Attorney General Jeff Sessions’ decision to rescind the Cole Memorandum, which directed U.S. Attorneys in states that had legalized marijuana not to pursue cases against the legalized industry or pot users so long as they were following state laws, not selling marijuana to minors, not shipping pot out of state, etc.

Marijuana is pretty popular in Boulder. In 2012, the city voted overwhelmingly for Amendment 64, and there are at least a dozen dispensaries doing well by doing good in town.

The City Council’s approach to legalization has been more, uh, laid back, than that of the people, preferring a strategy of stumbling forward when it’s pushed hard enough.

That’s because not withstanding pot’s popularity, Boulder is chock-full of nanny-statists who would micro-manage every aspect of your life in a heartbeat if they thought they could get away with it. The City of Boulder subscribes to the squeaky wheel theory of government, and those nannies squeak louder than most.

On the other hand, the Council, a) has already embraced the sanctuary city concept with regard to illegal immigrants, b) is the person who can’t say no when it comes to virtue signaling, and c) recognizes that there’s a widely held belief among Boulder voters that sticking a finger in Jeff Sessions’ eye is nothing if not virtuous.

Berkeley may not be the only place to give Jeff Sessions the finger this week.

According to the New York Times, a case was due to be heard in a New York Federal District Court challenging the Trump administration’s marijuana policy by attacking the constitutionality of federal anti-marijuana laws.

The five plaintiffs in the suit include former NFL player Marvin Washington, who is now a marijuana entrepreneur. Washington is challenging the feds’ use of the commerce clause to keep him from doing business in a state where marijuana is legal, even if his operations are conducted entirely within the state.

This strikes at the foundation on which federal anti-pot laws rest. The Constitution doesn’t explicitly grant the feds the power to regulate, let alone ban, marijuana. The feds claim they have a right to do so because the Constitution gives the federal government the right to regulate commerce among the several states — and because federal courts in the past have ruled that the federal government can regulate economic activity that occurs entirely within a state on grounds that it is part of “the web of commerce.”

If you have a couple of pot plants growing in your basement, you might be surprised to learn that they are in the web of commerce. (As Willie Shakespeare once remarked, what a tangled web we weave when we practice to deceive.)

The plaintiffs in the case have filed a 98-page complaint that appears to contain just about every talking point that has ever been raised against marijuana prohibition.

My favorite is that James Madison credited “sweet hemp” for giving him “insight to create a new and democratic nation.”

The case will be heard by Judge Alvin K. Hellerstein, who is taking it seriously. At a hearing in September he said he would give the matter his “prioritized attention,” setting it ahead of all of his other cases.

If Madison was alive today, he’d probably tell him, “Your Honor, I’d love to turn you on.”