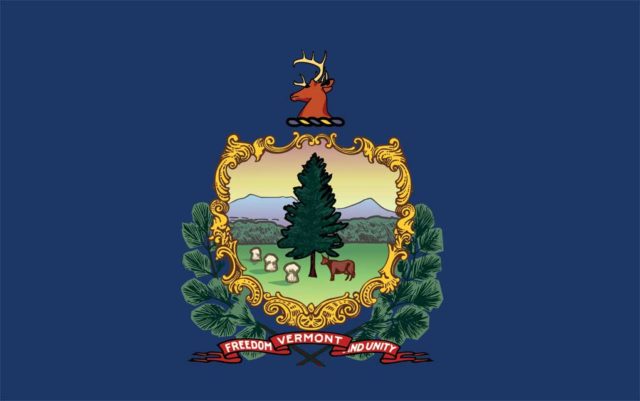 Our vow is recorded — our banner unfurled,
In the name of Vermont we defy all the world!

The legislature of a state (as opposed to the people of a state) voted last week to legalize marijuana.

The Vermont Legislature became the first state legislature in the country to pass a bill legalizing pot. The eight states and the District of Columbia that currently have legalized marijuana legalized it through a vote of the people.

The Vermont legalization leaves something to be desired, but it still does a lot. It legalizes possession of up to an ounce of marijuana by individuals and possession of up to two mature and four immature plants. The measure won’t kick in until July 1, 2018.

The biggest omissions are that the measure doesn’t provide for commercial production of pot and sale through dispensaries; nor does it provide for taxing and regulating production and sale. It does, however, establish a nine-member commission to study full legalization, taxation and regulation.

Even with those short-comings, passage of the bill is a big deal. That’s because 26 states don’t have the initiative process written into their constitutions. In those states, legalization can take place only by an act of their state legislatures.

Since Colorado passed Amendment 64 in 2012, legalization bills have been introduced in a number of state legislatures — 20 are currently pending, according to the National Association of State Legislatures — but none have passed. Until now.

It’s widely assumed that if one state legislature passes a legalization measure, others follow.

This is particularly true in the case of Vermont’s bill. That’s because the bill allows timid state representatives to cast a vote for ending the war on pot users by legalizing use and possession, while relying on a study commission to give them cover before voting for full, Colorado-style legalization. It’s an approach that could have a lot of appeal in other non-initiative states.

There is, however, one fly in the ointment: It’s not at all clear Vermont’s first-term Republican governor Phil Scott will sign the bill.

Some of Scott’s post-passage statements make him sound like a man who’s been getting threatening phone calls from drug war dead-enders like Chris Christie and Jeff Sessions and is trying to talk himself into doing the wrong thing.

“It’s no secret that I don’t believe this is a priority for Vermont,” Scott told Vermont Public Radio. “I believe that what we should be doing is trying to find ways to protect those on our highways, to deliver a level of impairment that is consistent throughout the Northeast, as well as to address the edibles for our kids before we move forward with legalization,” he said. “Having said that, I’m going to review the bill as it’s passed.”

All of which sounds a bit disingenuous. Scott routinely points to his concern about highway and child safety whenever the subject of legalization comes up, but it’s hard to believe that he isn’t aware of the fact that legalization in Colorado, Washington and Oregon has shown that both problems are eminently manageable. Colorado highways are not covered with stoner road-kill, and it’s a pretty safe bet that Colorado emergency rooms treat a lot more under-age alcohol victims than under-age edible victims.

Moreover, the issues of highway safety and edibles regulation are the sort of questions that the commission created by the bill is intended to address. And since the effective date of the bill was set for July 1, 2018, the Vermont Legislature will have a chance to address them during its 2018 session before legalization kicks in.

A poll taken in March by Public Policy Polling found Vermont voters support allowing adults 21 and older to possess and grow limited amounts of marijuana by a 57-39 percent margin.

Scott says he has “a Libertarian streak” in him. It won’t take much political courage for him to prove it.