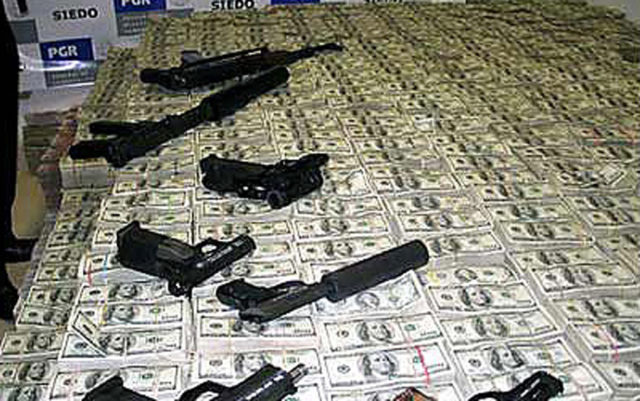 This week’s guessing game in Washington seems to be where will Trump get the money Congress won’t give him to build the border wall. Would you believe from El Chapo?

Joaquin “El Chapo” Guzman, the former leader of the Sinaloa drug cartel, was convicted on 10 felonies Feb. 12 and sentenced to life in prison (quite possibly Super Max in Canyon City).

The original federal indictment of Guzman in 2016 said that if he was convicted, the feds would seek forfeiture of any property or contractual right derived from his continuing criminal enterprise, “including but not limited to at least approximately a sum of money equal to $14 billion in United States currency.” And now he’s been convicted.

Which brings us to an idea Senator Ted Cruz (R-Texas) came up with a couple years ago: Use El Chapo’s ill-gotten gains to build the border wall.

Cruz even introduced a bill in the Senate titled the Ensuring Lawful Collection of Hidden Assets to Provide Order Act (EL CHAPO Act), which called for the use of the $14 billion seized from Guzman to pay for the wall. Somebody must have been stoned when they thought up the name.

“Fourteen billion dollars will go a long way toward building a wall that will keep Americans safe and hinder the illegal flow of drugs, weapons and individuals across our southern border,” Cruz said at the time.

Representative Jim Sensenbrenner (R-Wisc.), the ranking Republican member on the House Judiciary Committee, proposed similar legislation in the House, which would use money seized from drug cartels generally to fund a border wall.

“This is a way to fulfill the president’s desire to have Mexico pay for the wall,” Sensenbrenner said at the time. “Having the money seized from Mexican drug cartels would mean that the bad Mexicans would end up paying for the wall, and the bad Mexicans have been terrorizing the good Mexicans with crime and kidnappings and murders within Mexico itself…”

That last point — that using El Chapo’s money, or money seized from other drug cartels, could be spun to mean Mexico would be paying for the wall — could certainly cause Trump’s ears to prick up.

And if Trump is planning to divert funds from elsewhere in the government to pay for the wall, the diversion of drug money would probably be easier to justify both politically and in court than funds from most other sources.

Most assets forfeited in drug cases are already used to fight drugs and aren’t earmarked for other purposes, so using them to build the wall would be easy to justify as just another way to fight drugs. Politically it would be tough to object to as well, not that Schumer and Pelosi wouldn’t try.

Still, there are some practical problems here. Starting with the fact that it isn’t clear how much of Guzman’s money, if any, is in federal custody. If the feds don’t already have it, they might have to spend years hunting it down and then extracting it from banks all over the world, or from hiding places in Mexico.

It’s also possible that both the Mexican government and Mexican nationals would have claims on the assets. If so, that could lead to the sort of legal actions that could go on for decades.

In either case, the cash wouldn’t be available for wall-building in either the current budget or election cycle.

Still, the idea of using seized drug money, whether from Guzman or other traffickers, to build the wall has got to be appealing to Trump. It wouldn’t be surprising if he seeks to use some, either through executive action or by getting Cruz and/or Sensenbrenner to re-submit their bills.

The Drug Enforcement Agency “has estimated that the gross receipts of the Mexican drug trade are somewhere between $19-$29 billion a year,” Sensenbrenner said in 2017. “We don’t have to be 100 percent efficient to get the money we need to completely pay for the wall relatively quickly.”