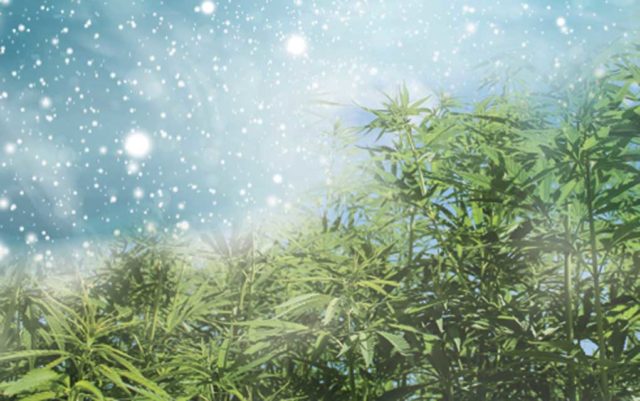 Los Suenos Farms, the largest marijuana producer in Colorado, is an outdoor grower,which means it is subject to the whims of Mother Nature.

And on Oct. 10, Mother Nature dinged Los Suenos Farms good and hard. A storm dumped several inches of snow on the Pueblo-based operation and subjected it to eight hours of sub-freezing temperatures.

As a result Los Suenos lost about half its crop.

According to a story in Marijuana Business Daily, the loss will reverberate throughout the state’s entire recreational marijuana industry, reducing the amount of marijuana available to both retailers and processors and pushing up wholesale pot processors.

“It was going to be a huge, bumper year,” said Los Suenos founder Bob DeGabrielle. “Unfortunately you can’t do anything about Mother Nature.”

Company workers were able to cut down about 20,000 of the 40,000 plants growing outdoors before the storm hit. Company employees kept harvesting even after the snow started, but the company didn’t have the storage space to accommodate emergency cropping, which limited what could be saved.

Workers tried covering plants with blankets, but 50-mph winds blew them off.

The crew also ran hot water into the fields to keep the root mass warm.

“This is definitely going to affect the entire state’s supply,” Joshua Haupt told Marijuana Business Daily. Haupt is chief revenue officer for Denver-based Medicine Man Technologies, which is currently in the process of acquiring Los Suenos Farms for $11.9 million.

As a result of the storm losses, the cost of material for THC extraction is likely to increase, as well as the cost of bottom-shelf flower used for pre-rolls and budget ounces at the retail level, according to Marijuana Business Daily.

Fortunately for Los Suenos, the company can salvage some of the biomass of the crop still in the fields for extraction. The flower on the frozen plants is unsuitable for sale as flower, but it can be sold along with the rest of the biomass to THC extractors. Ironically, the presence of the un-harvested flower in the biomass boosts its THC content — to 18% to 24% THC from 6% to 8% in a normal year — and thus its price.

Back during alcohol prohibition, some clandestine booze producers added cheap and legally available methyl alcohol (also known as wood alcohol) to their product as a way of stretching it and their profits.

Unfortunately methyl alcohol is poisonous. The resulting blended product, sometimes called rotgut, can permanently blind or kill you. Now it turns out that similar activity may be behind the recent surge in vaping-associated lung damage and deaths.

According to a recent Associated Press story, Utah health authorities discovered last year that more than 50 people in the Salt Lake City area had been poisoned by a vape called “Yolo!!” (as in, You Only Live Once). The vape was supposed to contain only CBD and was sold legally.

But analysis showed it contained the synthetic marijuana compound that’s commonly known as Spice or K2 — and no CBD.

It took authorities more than a year to locate the person behind Yolo!!, who turned out to be a woman named Janell Thompson in Carlsbad, California. She had started a legitimate tobacco vaping business in 2010, but eventually moved on to selling vapes containing illegally produced synthetic pot.

She was finally busted for selling vapes containing another synthetic in North Carolina. The vapes, sold under the Black Magic and Black Diamond labels, had sickened 40 people in the state, including high school students and military personnel.

Thompson is facing federal drug trafficking charges that could land her in prison for 40 years.

The important point here, which the AP story failed to mention, is that the authorities have hard evidence of the cause of vaping illnesses, and it involves neither CBD, nor THC, nor even nicotine, but illegal synthetic marijuana compounds known to be dangerous.

That’s an important detail given that authorities in several states have already banned or are considering bans on vapes containing CBD and THC without any evidence that they contributed to the vape illnesses, which they almost certainly didn’t.