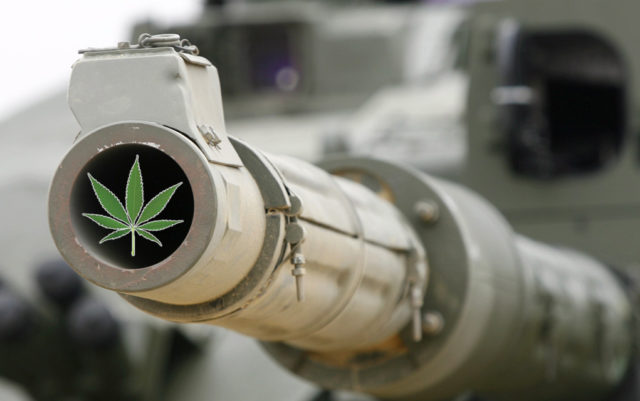 This just in! The Evil Empire is plotting to launch a massive propaganda offensive against marijuana.

Fortunately, Dominic Holden, a journo at BuzzFeed News, has discovered the plot and exposed it.

Holden, in a fine piece of investigative reporting that deserves to be in his highlight reel, revealed that earlier this summer the White House Office of National Drug Control Policy (aka the Office of the Drug Czar, aka the Evil Empire, aka the Cesspool of the Swamp) has told 14 federal agencies and the Drug Enforcement Administration to send over “data demonstrating the most significant negative trends” about marijuana and the “threats” it poses to the country.

The denizens of the Office of National Drug Control Policy, perhaps knowing that they don’t have much credibility left on anything — the opioid epidemic blew up on their watch — have opted to create a front group to conduct a new war on pot: The Marijuana Policy Coordination Committee.

The Coordination Committee sent out a memo to the 14 federal agencies stating “Departments should provide … the most significant data demonstrating negative trends, with a statement describing the implications of such trends.”

A summary of one of the committee’s meetings added: “Staff believe that if the administration is to turn the tide on increasing marijuana use there is an urgent need to message the facts about the negative impacts of marijuana use, production, and trafficking on national health, safety, and security.”

The committee followed up by sending instructions to a number of federal departments — including Defense, Education, Transportation, Veterans Affaris and the EPA — telling them to submit two-page, bulleted fact sheets that identify marijuana threats and issues with various state legalization initiatives by Aug. 10.

The agencies were also told they should provide an example of a “story, relating to an incident or picture, that illustrates one or more of the key areas of concern related to use, production, and trafficking of marijuana.” They were also asked to describe how pot poses threats to their department and the consequences of marijuana “on national health and security.”

The committee says that its work product is to be used in briefing President Trump “on marijuana threats.”

Just guessing, but they probably are also planning to use it to campaign against legalization initiatives in Michigan, North Dakota, Missouri and Utah. Putin isn’t the only latter-day czar who likes to meddle in American elections.

Republican Senator Cory Gardner’s communications director, Alex Siciliano, issued a statement saying that Gardner expects Trump to keep his promise to support Gardner’s bill to prevent the federal government from enforcing the anti-marijuana provisions of the Controlled Substances Act in states that have legalized recreational or medical marijuana use.

“Forty-seven states have now acted in a way that is contrary to the Controlled Substances Act and there are more initiatives on the ballot this year,” Siciliano said. “Whatever their decision, these states ought to be respected. Regardless of the accuracy of the story, Senator Gardner remains confident in the commitment the President made to him to support a states’ rights solution to the current disconnect on marijuana law.”

Democratic Senator Michael Bennet sent a letter to James Carroll, the acting drug czar, calling out his office for collecting only negative information on marijuana.

“The only way to ‘turn the tide’ on any issue with the public is to be a credible voice,” Bennet wrote. “By cherry-picking data to support pre-ordained and misinformed conclusions on marijuana, the Trump administration has further eroded any credibility it had on the issue.”

Polis, who has been a leading advocate of marijuana reform in Congress, charged Trump is “flailing” on marijuana policy, “sometimes saying the states should decide, while also allowing the Attorney General and other prohibition supporters in his purview to run amuck.”

“If the White House is actually spreading misinformation about marijuana to undercut states’ rights, it’s appalling but not out of the ordinary for President Trump and his gang of prohibition supporters,” he added.

Chances are Polis will be riding this horse from here to November. And if Trump doesn’t tell the acting drug czar to stop acting out, so will a lot of other Democrats.