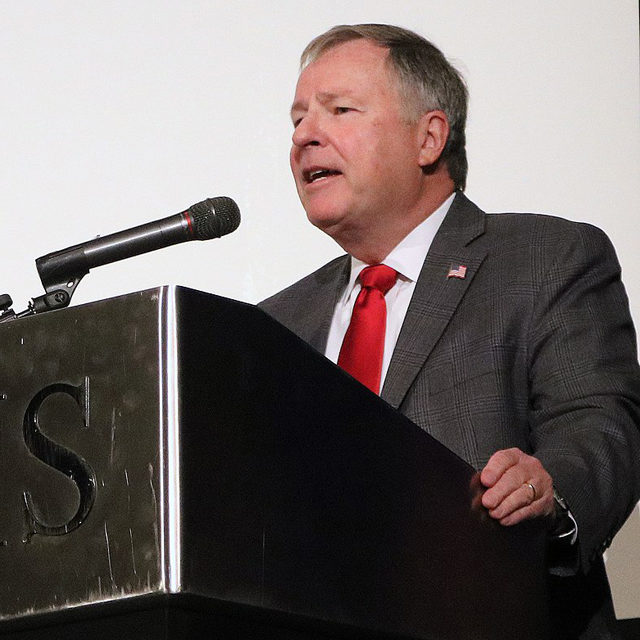 Republican Congressman Doug Lamborn, on Saturday, Sept. 14, told the In God We Trust Rally of the Truth & Liberty Coalition that the fact that marijuana dispensaries are sometimes found operating on the same street as churches is “evidence” of the “spiritual war our nation is entrenched in.”

“We need to look no further than our own streets to see evidence of this conflict,” quoteth he. “Marijuana dispensaries are on the same streets as thriving churches.”

Wow! And that’s not the half of it! Liquor dispensaries are on the same streets as thriving churches! Right in Denver, by Godfrey!

Right on Colfax Avenue (for example)! At the corner of Colfax and Logan — The Catholic Cathedral Basilica of the Immaculate Conception thriveth there! And not four blocks to the east, at 760 E. Colfax, we findeth Argonaut Wine & Liquor, one of the largest booze dispensaries in the state!

But wait, there’s more! The spiritual war on Colfax must be fought on two fronts, for a mere block to the east of the Basilica is the State Capitol, lair of the Colorado Legislature, of which ’tis said that no man’s life or property is safe while it sittith!

(BTW, the nearest marijuana dispensaries on East Colfax are three miles to the east.)

It’s finally gonna’ happen. A major marijuana reform bill is going to be voted on in Congress.

According to CNN, House Majority Leader Steny Hoyer’s office has announced that he intends to bring a bill to give marijuana businesses access to the federal banking system to the House floor this month.

The bill, which has bi-partisan support, is the Secure and Fair Enforcement Banking Act (or SAFE Banking Act). It was introduced by Colorado Democratic Representative Ed Perlmutter.

Currently marijuana businesses are largely locked out of banking services in states with legal recreational or medical marijuana because pot is still illegal at the federal level.

As a result, marijuana businesses from growers to dispensaries have to operate as “cash only” businesses, which creates a host of problems.

Allowing marijuana entrepreneurs to keep their receipts in banks instead of under their beds has obvious anti-crime benefits. Passage of the SAFE Banking Act would also make it possible for pot businesses to get bank loans.

The bill is thought to have a good shot at passing the House. It cleared the House Finance Committee on a 45-15 vote and has attracted the support the American Bankers Association and several major banks and insurance companies, as well as a bipartisan group of attorneys general from 33 states and five territories.

Passage of a companion bill in the Senate, sponsored by Oregon Democratic Senator Jeff Merkley and Colorado Republican Senator Cory Gardner, is another matter, although there have been some encouraging signs.

According to an article in Forbes by Marijuana Moment’s Tom Angell, on Monday, Sept. 17, Minnesota Democratic Senator Tina Smith became the 33rd co-sponsor of the Senate bill. Also, Senate Banking Committee Chairman Idaho Republican Senator Mike Crapo has announced that he would like to hold a vote on a marijuana banking bill (although not necessarily the SAFE Banking act).

Even if the bill only passed the House, it would still be a big deal. Politically and psychologically, it would end the taboo against Congressmen directly considering marijuana reform legislation. This is important because legislation to remove marijuana from the Controlled Substances Act and to exempt states that have legalized pot from the Controlled Substances Act’s anti-pot provisions is in the Congressional pipeline.

Passage of the banking bill would give legalization supporters in Congress a powerful, three-word argument in favor of the follow-on bills when they reach the House floor: Follow the money.