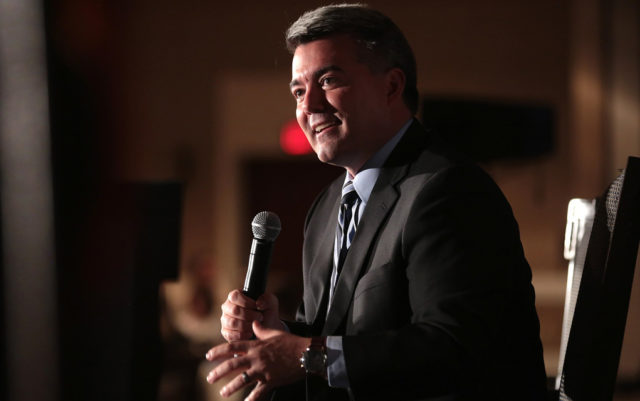 If at first you don’t succeed, hitch up your pants, spit out your broken teeth and try again.

The bill is called the STATES Act, for “Strengthening the Tenth Amendment Through Entrusting States.”

(The one-sentence-long Tenth Amendment states that “The powers not delegated to the United States by the Constitution, nor prohibited by it to the States, are reserved to the States respectively, or to the people.”)

“In 2012, Coloradans legalized marijuana at the ballot box and the state created an apparatus to regulate the legal marijuana industry. But because of the one-size-fits-all federal prohibition, state decisions like this put Colorado and other states at odds with the federal government,” Gardner said in a prepared statement.

“The federal government is closing its eyes and plugging its ears while 47 states have acted. The bipartisan STATES Act fixes this problem once and for all by taking a states’ rights approach to the legal marijuana question. The bipartisan commonsense bill ensures the federal government will respect the will of the voters — whether that is legalization or prohibition — and not interfere in any states’ legal marijuana industry,” he said.

“I’ve been working on this for four decades,” Blumenauer told the Marijuana Moment website. “I could not be more excited.”

He called the STATES Act “a landmark.”

Colorado Democratic Representatives Ed Perlmutter and Joe Neguse are also among the co-sponsors. Neguse, whose district includes Boulder, tweeted that he joined in sponsoring the bill because it “will ensure the cannabis industry in Colorado is not held back by the federal government’s delay in legalization,” and to ensure that marijuana businesses “can access banks & loans & that the threat of federal prosecution is removed.”

On April 1, Denver Democratic Representative Diana DeGette introduced a separate bill that does essentially the same thing as the STATES Act. DeGette’s bill, titled the Respect States; and Citizens’ Rights Act, is similar to legislation she introduced in the previous four Congresses.

It’s not clear why she chose to introduce separate legislation instead of joining the co-sponsors of Blumenauer’s bill.

Past attempts to get marijuana legislation through Congress haven’t had much support from interest groups beyond those directly advocating for pot, like NORML and the Marijuana Policy Project. That isn’t the case this year.

The support from a diverse portfolio of interest groups, especially conservative ones, significantly increases the bill’s chances of passage.

Put not your trust in polls department. For weeks, polls taken in Israel showed a political party whose founder advocated marijuana legalization as winning as many as seven seats in Israel’s parliament and conceivably being able to determine whether a conservative bloc lead by incumbent prime minister Binyamin Netanyahu or a liberal bloc led by former army chief of staff Benny Gantz would form the next government.

The polls were wrong. Israel voted on Tuesday and with more than 97 percent of the vote counted the Zehut party failed to get the minimum percentage of votes (3.25 percent) necessary to claim any seats in parliament. Party founder Moshe Feiglin, a former member of Netanyahu’s Likud Party who went rogue, said he was still hopeful of getting the minimum required, since most of the outstanding votes were cast by soldiers, most of whom are in the age groups most likely to favor marijuana legalization, but the prospect seemed unlikely. The party’s poor showing seemed due to the fact that its rise in the polls drew furious attacks from parties across the political spectrum.