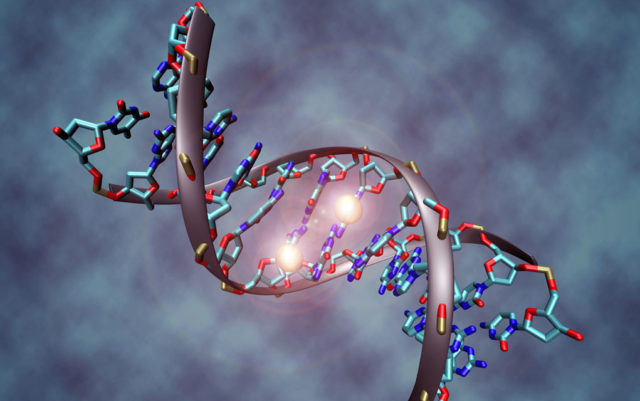 Can a genetic mutation make about one in 10 marijuana users predisposed to becoming addicted to pot? Researchers in Denmark think they have found one that does.

Danish researchers claim they have identified a gene that increases the risk of a marijuana user developing “cannabis use disorder,” a term that covers both dependency and addiction, and a lot more (more on that in a moment).

The Danish researchers identified a variant of the gene for CHRNA2 (aka Cholinergic Receptor Nicotinic Alpha 2 Subunit), that affects the risk of developing cannabis use disorder.

This is a significant finding, because CHRNA2 is not one of the main receptors to which THC and CBD bind. Those are dubbed CB1 and CB2.

According to an article posted on the Genetic Literacy Project’s website, nicotinic acetylcholine receptors are much more abundant and widespread than the two cannabinoid receptors. Each of the CHRNA receptors has five parts, with a different gene encoding each of the parts.

Mutations in the CHRNA2 gene have been associated with a type of epilepsy and with nicotine dependence. The new work found an association with cannabis use disorder as well.

The mutation that the researchers identified consists of a variation in a single nucleotide or “letter” in the CHRNA2 gene. Such variations are called “single nucleotide polymorphisms” or SNPs (pronounced ‘snips’).

The researchers, who are associated with Aarhus University and with deCODE Genetics Amgen, found the offending SNP by conducting a “genome-wide association study.” Such studies compare many SNP sites in the genomes of thousands of people who share a trait or illness, seeking SNP patterns that they share. The study found people diagnosed with Cannabis Use Disorder are more likely to share a mutated version of CHRNA2 than a control group.

Ditte Demontis of the Center for Genomics and Personalized Medicine at Aarhus and colleagues analyzed the SNP patterns in the genomes of 2,387 people with cannabis use disorder and 48,985 controls from a nation-wide Danish sample. They then checked their work by analyzing data in the national Icelandic genetic database, one of the world’s largest. They got the same results for 5,501 cases of cannabis use disorder and 301,041 controls.

Further experiments that looked at gene expression in brain slices found that while normal CHRNA2 is active in the cerebellum, the variant linked to cannabis use disorder is less so. Significantly, reward and inhibition pathways arise from neural networks in this part of the brain, where both cannabinoid and CHRNA receptors are common.

If the study has a weakness, it might be in its seemingly uncritical acceptance of the definition of cannabis use disorder.

There are seven or eight criteria (depending on how you count) that are used to define cannabis use disorder. Here’s the eight-criteria version of the list:

2) Great effort to get marijuana

3) Problems with work, school, home life due to marijuana use

6) Attempting to cut down or stop

7) Continuing even if recognizing social problems and endangered health

If you experience two of these in the course of a year (or three if you don’t experience withdrawal) after having used pot as few as six times a year, you can get a cannabis use disorder diagnosis hung on you.

This suggests that a lot of people who use marijuana infrequently (seven times a year, for example) or in moderation are included in the cannabis use disorder cohort — possibly enough to affect the results of the study.

Still, the finding that a genetic variation might make marijuana use risky for about 10 percent of users, but not for the other 90 percent, is a big deal. For one thing, it opens the possibility of developing drugs that counter the effects of the CHRNA2 mutation in those who have it.

Perhaps more important, it means that it might be possible to develop a genetic test that would tell people whether they could use pot without the risk of developing a dependency or addiction.

And that in turn would destroy the rational for using prohibition as a strategy for fighting marijuana abuse and relegate it to the category of medieval medicine, where it has always belonged.