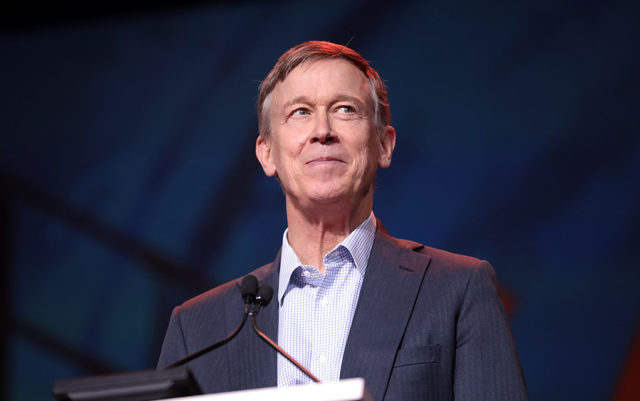 OK, I’ve smoked a lot of pot over the years (I inhaled for the first time in 1965) but there is nothing wrong with my long-term memory.

And I recall that back in 2012 then-Governor John Hickenlooper got his shorts in a knot over the prospect of Colorado voters legalizing recreational marijuana by passing Amendment 64 and went out of his way to urge a no vote.

But Hickenlooper was a good enough politician that (as we used to say back in the ’60s) he didn’t need a weatherman to know which way the wind was blowing. So he spent the balance of his time in office working to implement a legal, regulated recreational marijuana market in Colorado — for which he deserves full credit.

But, on June 27, during the Democratic presidential debate, now-presidential candidate Hickenlooper engaged in some political lily-gilding over his pot politics in 2012.

In his closing statement at last Thursday’s debate, Hick presented a laundry list of his accomplishments as governor — which to a lot of people seemed to include taking partial credit for legalizing marijuana.

“We were the first state to legalize marijuana and we transformed our justice system in the process,” he said. “You don’t need big government to do big things,” he continued. “I know that because I’m the one person up here who’s actually done the big, progressive things everyone else is talking about.”

Marijuana activists were not amused.

“Hickenlooper deserves zero credit for legalization in Colorado and his attempts to claim otherwise are politically craven and amount to outright lies,” NORML Executive Director Erik Altieri told the Marijuana Moment website. “The only ones who deserve credit are the citizens of Colorado who took the bold and sensible step towards legalization, despite the utter lack of leadership from their governor.”

Added Mason Tvert, who co-directed the Amendment 64 drive, “It’s a little strange that Hickenlooper is seemingly taking credit for legalization in Colorado, and it’s upsetting that he tried to use it as a way to distinguish himself from the rest of the field. As a mayor and then as governor, he repeatedly opposed efforts to roll back marijuana prohibition, including the state’s historic legalization initiative in 2012.”

“While he deserves credit for implementing that law and finally coming around on the issue,” Tvert said, “he has no business holding it over the heads of other candidates who support legalization — especially since several of them never fought it like he did. If Hickenlooper wants to use marijuana policy as a campaign issue, he should avoid misrepresenting what he did in the past and focus on what he would do in the future.”

Good advice. Hick should quit trying to gloss over his past opposition to legalization and say the three magic words: “I was wrong.” Then he can more credibly take credit for what he subsequently did right. And his campaign promises concerning what he would do if he were elected president (admittedly a long-shot) would carry a lot more weight as well.

He now says he favors 1) removing marijuana entirely from the drugs regulated under the dederal Controlled Substances Act, where it’s now treated like heroin; 2) allowing the Food and Drug Administration to study marijuana; 3) providing banking access to marijuana businesses; and 4) expunging the records of individuals with prior “low-level, non-violent marijuana convictions.”

All of which is pretty mainstream for Democratic presidential candidates these days. Give Hickenlooper credit for that much. But when it comes to marijuana reform, a leader he wasn’t and he shouldn’t claim to be. It’s more like he stumbles forward when he’s pushed.

Two governors who are leaders on marijuana reform are J. B. Prizker of Illinois and Michelle Lujan Grisham of New Mexico, both Democrats.

On June 25, Prizker, who campaigned on marijuana reform last year, signed legislation making Illinois the 11th state to have legalized recreational marijuana. (Signing the bill earned Prizker a shout-out from Mick Jagger at a Rolling Stones concert in Chicago a few hours later, which drew a roar of approval from the crowd.)

On June 28, Grisham announced she will place recreational marijuana legalization on the governor’s call for next year’s short session of the legislature, which will begin January. The 30-day session is mostly limited to considering items on the governor’s call. A New Mexico marijuana legalization bill passed the State House earlier this year, but died in a State Senate committee.