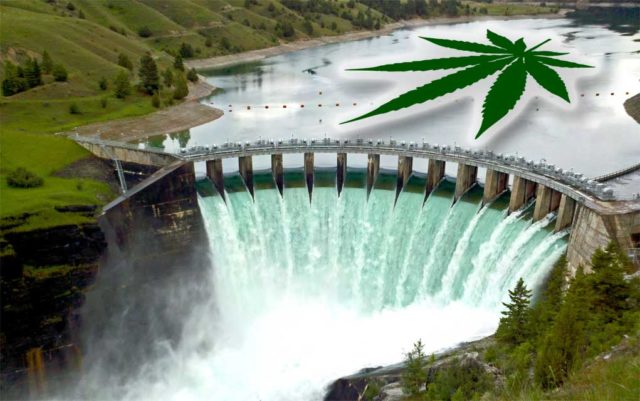 The dam is breaking.

According to the website Marijuana Moment, four governors called for marijuana reform in State of the State speeches on a single day this week (Tuesday).

In New York, Governor Andrew Cuomo called for legalizing marijuana during his State of the State speech, formally completing his evolution from pot prohibitionist to pot populist.

“Legalize adult-use cannabis,” he said. “Stop the disproportionate impact on communities of color and let’s create an industry that empowers the poor communities that paid the price and not the rich corporations who come in to make a profit.”

His plan calls for putting a 20 percent state tax and a 2 percent county tax on marijuana transfers from wholesalers to retailers. In addition it would also tax cultivators $1 per gram (about $28 an ounce) on dry flower and $0.25 a gram (about $7 an ounce) on trim. Hey, it’s New York. Taxes play a big part in its life.

Meanwhile, across the mighty Hudson in New Jersey, Governor Phil Murphy, who made marijuana legalization a big part of his gubernatorial campaign in 2017 (New Jersey governors are elected in odd numbered years), renewed his call for legalization in his State of the State speech.

“By legalizing adult-use marijuana — first and foremost — we can reverse the inequality and unfairness left from years of failed drug policies and shift public safety resources to where they can do the most good,” he said.

The New Jersey legislature has already held a hearing on recreational marijuana legalization and the main things holding up a bill are differences over taxes between Murphy and State Senator Nicholas Scutari, who is sponsoring the legalization bill in the Senate. Scutari’s bill calls for 12 percent in state taxes, which would be the lowest state tax bite in the country. Murphy wants 25 percent in state taxes. The tax rate New York decides to go with will probably influence the final figure.

In New Mexico, newly-elected Governor Michelle Lujan Grisham used her State of the State address to reiterate her promise to make opioid addiction a qualifying condition for medical marijuana use, saying she would direct the state health department “to adopt the longstanding recommendation from the Medical Cannabis Advisory Board to include opioid addiction as a qualifying condition” for receiving medical pot.

During her campaign she said she was committed “to working with the legislature to move toward legalizing recreational cannabis in a way that improves public safety, boosts state revenues and allows for New Mexico businesses to grow into this new market.” No elaboration on that in the State of the State address, however.

In Washington state, where the voters legalized marijuana at the same time Colorado did in 2012, Governor Jay Inslee talked about his Marijuana Justice Initiative, which allows people with simple marijuana possession convictions in the last 20 years to apply for an expedited pardon. An estimated 3,500 Washingtonians qualify under the program.

And as sort of a maraschino cherry on the sundae, during his confirmation hearing on Tuesday, Jan. 15, Attorney General nominee William Barr told the Senate Judiciary Committee that he would “not go after” state-legal marijuana programs.

Barr said he would respect state marijuana laws and businesses that had relied on the Obama-era Cole memorandum, which ex-Attorney General Jeff Sessions had repealed. The memorandum had said the federal government would not enforce the federal Controlled Substances Act’s anti-marijuana provisions in states that had legal pot on the state level, except in cases involving things like distribution of marijuana to minors, growing of marijuana on federal lands, and revenue from marijuana sales going to criminal enterprises and cartels.

He also called on Congress to pass legislation addressing the disparity between federal and state law.

And that was just on Tuesday.

On Monday, Jan. 14, J.B. Pritzker, Illinois’ newly elected governor used his inaugural address to again call for legalizing recreational marijuana; he had made legalization a major plank in his platform during the election.

Legalization measures with a good chance of passing are expected to be introduced shortly in the Connecticut, Rhode Island and New Hampshire legislatures.

Marijuana legalization used to be considered a third rail of politics. By 2020 opposition to legalization may achieve that status.