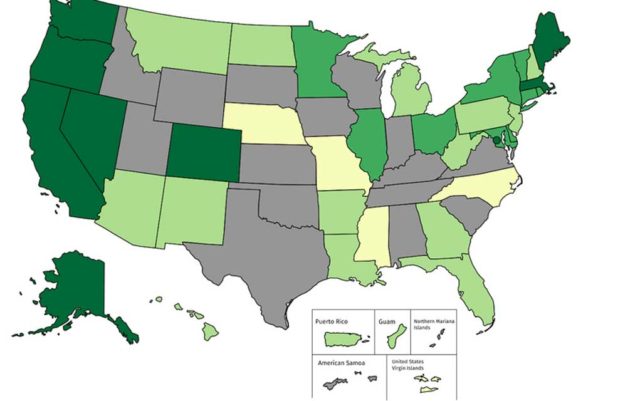 On June 7, Colorado Republican Sen. Cory Gardner and Massachusetts Democratic Sen. Elizabeth Warren followed through with their promise to introduce legislation that would change federal law to respect the right of states to decide whether or not to legalize marijuana.

At the same time a companion bill was introduced in the House with Colorado Democratic Rep. Jared Polis as one of the co-sponsors.

The following day (June 8) President Trump followed through on his promise to Gardner to support a “states’ rights”–based bill to do so.

Also on June 8, the 48-member Congressional Black Caucus issued a position paper “supporting efforts to decriminalize the use and possession of marijuana” and saying that states should be allowed to make their own decisions about how to regulate marijuana. The federal government “should be out of the business of prohibition and related law enforcement of marijuana,” it said.

And the governors of 12 states — six Republicans and six Democrats, including Colorado Gov. John Hickenlooper — sent a letter to Congress urging passage of the Gardner/Warren bill, whose title is the Strengthening the Tenth Amendment Entrusting States Act (or STATES Act).

And over the weekend, the U.S. Conference of Mayors went further, calling for the complete removal (or “descheduling”) of marijuana from the Controlled Substances Act instead of just exempting states that have legalized from the act’s marijuana provisions. Descheduling can be done by the President through executive action, although Congress could certainly do it as well.

So what are the chances of the STATES Act actually passing? Hardly a slam dunk, but probably better than any past effort to legalize marijuana at the federal level.

There are currently two other bills in the Senate to legalize both recreational and medical marijuana in federal law, one sponsored by New Jersey Democratic Sen. Cory Booker and the other by New York Democratic Sen. Charles Schumer. Of the three, Gardner/Warren probably has the best chance of passage, because it is deliberately bi-partisan in its sponsorship, because of the backing from the President, and because framing it in terms of states’ rights and the 10th Amendment throws down a gauntlet to Republican senators and congressmen who call for federal powers to be devolved to the states.

A back-of-the-envelope vote count suggests the STATES bill might receive majority support if the vote were to occur today.

Increasing numbers of Democratic candidates for all offices are openly running on marijuana legalization platforms, and Democratic Party conventions in New York and Connecticut have passed resolutions calling for legalization.

In the Democratic camp, opposing legalization is becoming more politically risky than supporting it. For instance, New York’s Governor Andrew Cuomo, a nanny-statist’s nanny-statist, is facing a primary challenge from actress Cynthia Nixon (Sex and the City) who is making legalization the centerpiece of her campaign. She probably won’t win, but could well cut into Cuomo’s support among blacks and Hispanics, who are several times more likely to be arrested for marijuana offenses than whites.

This suggests most Democrats in the Senate will vote for the STATES bill — say 45 out of 49 as a guess. (There are outspoken Democrat pot prohibitionists, like Sen. Tom Carper of Delaware who has an F rating from National Organization for the Reform of Marijuana Laws.)

Most of the opposition to Gardner/Warren is expected to come from the Republican side, but it will not be unanimous. In addition to Gardner, there are 10 Republican senators who have made past statements indicating they support leaving marijuana legalization to the states.

This suggests there could be majority support in the senate for the STATES bill — if leadership lets it get to the floor — but overcoming a filibuster may be another matter.

A similar dynamic exists in the House of Representatives, with most but not all Democrats likely to be in favor, and with strong, but not unanimous, opposition coming from Republicans. But there are 56 seats in the House from which incumbents have bailed, more than two-thirds of whom are Republicans. Many of these are now in play. And a number of Republican incumbents who are running are looking at tough re-election races.

Nothing concentrates the mind like the knowledge that you might be hanged in the morning — especially when the rope may be hemp.