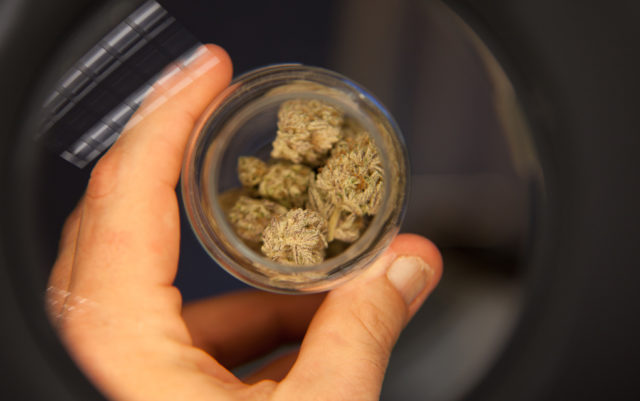 Most marijuana prohibitionists have given up on claiming that marijuana is addictive.

That’s because in order to make the charge stick they have to expand the concept of addiction to the point where it doesn’t have much meaning. Instead they’ve come up with a more invidious concept to demonize pot use: “Marijuana Use Disorder.”

According to a passage in the National Survey on Drug Use and Health (NSDUH), which every year interviews 70,000 people over the age 12 about their drug and alcohol use (if any), the interviewees “were categorized as having a Marijuana Use Disorder if they met the DSM-IV criteria for either dependence or abuse for marijuana.”

The DSM-IV criteria used for defining marijuana “dependence” are the same as those used for defining “Illicit Drug Use Disorder,” which encompasses drugs like cocaine, heroin, hallucinogens, inhalants, methamphetamines or prescription opioids, as well as marijuana.

The seven criteria are:

“1. spent a lot of time engaging in activities related to use of the drug,

“2. used the drug in greater quantities or for a longer time than intended,

“3. developed tolerance to the drug,

“4. made unsuccessful attempts to cut down on use of the drug,

“5. continued to use the drug despite physical health or emotional problems associated with use,

“6. reduced or eliminated participation in other activities because of use of the drug, and

“7. experienced withdrawal symptoms when respondents cut back or stopped using the drug.”

These may sound like a plausible set of criteria for  defining marijuana dependence — except for one small detail: National Survey on Drug Use and Health “respondents who used marijuana on 6 or more days in the past 12 months” were categorized as having a Marijuana Use Disorder if they met three or more of the criteria.

In other words, if you smoke pot six times a year, once every two months on average, you can be classified as being dependent on marijuana and having a shiny new mental illness — Marijuana Use Disorder.

Now then, just for grins let’s see how the six criteria hold up when applied to someone who smokes pot six times a year:

Criterium 1: You “spent a lot of time engaging in activities related to use of the drug.” For the six glorious days a year on which you inhaled? What in the name of sanity were you doing on the other 359 days? Lurking in head shops? Downloading pot pictures from Google Images. Getting off while reading back issues of High Times? Give me a break.

Criterium 2: You “used the drug in greater quantities or for a longer time than intended.” Maybe you were planning to get stoned every three months, but you got stoned every two months instead. Bang! Smoking gun evidence of dependence.

Criterium 4: You “made unsuccessful attempts to cut down on the use of marijuana.” You couldn’t cut your six days a year, ganja Jones, down to five days a year, no matter how hard you tried? You obviously need professional help.

Criterium 5: You “continued to use marijuana despite physical health or emotional problems associated with use.” So smoking pot once every two months turned you into a physical and emotional wreck? Oh sure.

Criterium 6: You “reduced or eliminated participation in other activities because of use of pot.” Activities like not using power tools or driving under the influence, maybe? You thought you were just being careful, when actually you were flying your Marijuana Use Disorder flag.

Question for the folks conducting the National Survey on Drug Use and Health: Is someone who meets three of the six criteria while using alcohol six times a year or who has a beer after work or a drink before dinner suffering from alcohol dependence and Alcohol Use Disorder? And if not, why not?

Using these foregoing metrics, the NSDUH survey concluded that 4 million Americans over the age of 12 have a Marijuana Use Disorder.

What’s going on here is plain enough. Some credentialed charlatans in the federal government and the psych community are trying to define normal human conduct — occasional use of marijuana or regular use in moderation — as mental illness.

It kind of reminds you of how the People’s Republic of China, and the Soviet Union before it, tried to weaponize mental health, doesn’t it?