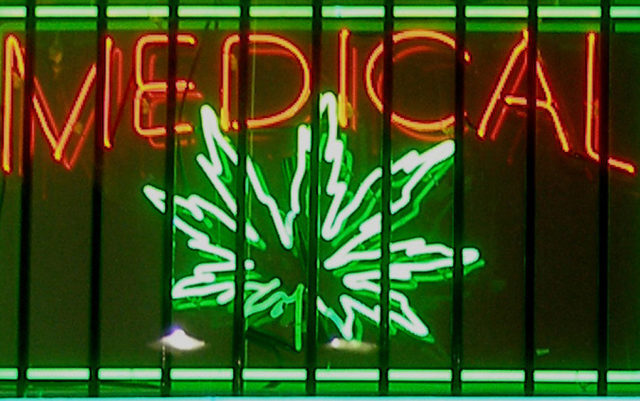 Wow. This could be a big deal — especially if you happen to be a talking duck selling accident insurance in New Jersey. Or one of the several million Americans using medical marijuana for pain relief.

According to a story in the Philadelphia Inquirer, a New Jersey administrative law judge has ruled that an insurance company must cover the costs of medical marijuana used by a man injured in an on-the-job accident.

The man, Andrew Watson of Egg Harbor Township, suffers from lingering neuropathic pain in his left hand as the result of an accident involving a power saw at an 84 Lumber store in 2008.

He had been using the opioids Endocet and Oxycodone for relief, which his insurance company did cover, but tried medical marijuana in 2014 after the opioids were proving inadequate. Medical pot allowed him to reduce opioid use, but he had to discontinue using it after three months because he couldn’t afford it.

After hearing testimony from Watson and New Jersey psychiatrist/neurologist Edward H. Tobe, Administrative law judge Ingrid L. French found “the evidence presented in these proceedings show that the petitioner’s ‘trial’ use of medicinal marijuana has been successful. While the court is sensitive to the controversy surrounding the medicinal use of marijuana, whether or not it should be prescribed for a patient in a state where it is legal to prescribe it is a medical decision that is within the boundaries of the laws of the state.”

She also found that Watson’s “approach to his pain management needs has been cautious, mature and… exceptionally conscientious…”

John Carvelli, the lawyer who represented Gallagher Basset Services, a third-party administrator for 84 Lumber’s insurance company (which wasn’t identified in news accounts), argued that Watson’s ailment did not qualify for medical marijuana under the state program and that Watson had received a recommendation to use marijuana from a doctor who was not his treating physician.

Following Judge French’s decision Carvelli sent an e-mail to the Inquirer reading in part, “we respect the court’s decision… At this juncture there is no plan to appeal.”

Phillip Faccenda, the lawyer who represented Watson, said the decision might benefit insurance companies too.

“We believe this will offer very powerful cost savings with respect to the entire workers’ compensation industry in New Jersey,” he said. “More costly pharmaceuticals (opioids) can be reduced and medical marijuana would be a less expensive treatment modality.”

French is one of about 50 administrative law judges that handle workers’ compensation cases in New Jersey. While her decision isn’t binding on the others, let alone on judges in other states, the opinion is apt to be read by them and considered when they hear similar cases.

There isn’t a lot of research on the medicinal effects of marijuana out there — the marijuana prohibitionists saw to that ages ago — but thanks to the legalization of medical marijuana in 30 states, doctors who prescribe pot are collecting a ton of information about how their patients fare using it.

Now a company named Arfinn Med has launched a web portal to allow those docs to share information.

Within the portal “medical professionals can obtain peer-based reports on treatment effectiveness, daily dosage, delivery method and other information specific to patient demographics,” according to a press release issued at the time of the portal’s Jan. 14 launch.

“We are pleased to launch Arfinn Med as the first collaborative and insight-driven medical marijuana portal for medical professionals,” said James West, the company’s founder and CEO. “Our goal is to provide physicians with access to benchmark data, industry news, and relevant, peer-to-peer discussions as a tool to further enhance their practices.”

The collection of this sort of information is not the same as information generated by the clinical trials conducted before FDA approval of new drugs or by double-blind experiment. But it may be just as valuable. Doctors sharing clinical experiences with other doctors is how new drugs and procedures were introduced into medicine before the invention of the Food and Drug Administration, ten year drug approval cycles and predatory drug pricing.