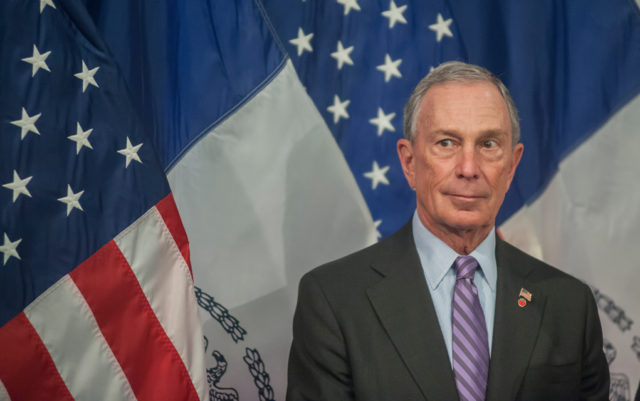 Michael Bloomberg, the former New York mayor who a few days ago slithered into the race for the Democrats’ presidential nomination, wants to ban guns, trans-fats and soft-drinks. Now where do you suppose he stands on marijuana?

As with Joe Biden, if the War on Drugs was a real war, Michael Bloomberg would be a war criminal.

His current view on legalizing marijuana for either medical or recreational purposes: The “stupidest thing anybody has ever done.”

Last week Kyle Jaeger, a superb hard news journo at the Marijuana Moment website, did a deep dive into Bloomberg’s positions on marijuana. He was down so long he was lucky he didn’t get the bends. Here are some of the putrid pearls he came up with:

Bloomberg was mayor of New York from 2002 to 2014. From 2002 to 2012, the New York Police Department made about 440,000 arrests for marijuana possession alone, according to a report prepared by the Drug Policy Alliance.

There were more marijuana arrests during Bloomberg’s time as mayor than under Mayors Ed Koch, David Dinkins and Rudy Giuliani combined.

There were consistent racial disparities in pot arrests on Bloomberg’s watch — which at the time he evidently approved of. During a fight over two city council bills to rein in the NYPD’s massive use of stop-and-frisk searches that disproportionately targeted blacks and Hispanics, Bloomberg said: “I think we disproportionately stop whites too much and minorities too little. It’s exactly the reverse of what they say.”

In January 2019, Bloomberg said the rising rates of drug overdose deaths linked mostly to the opioid epidemic were a reason why pot shouldn’t be legal.

In 2013, he said he doesn’t support marijuana legalization because THC potency has increased and because he thinks drug dealers would just move on to selling other illicit drugs like cocaine.

In 2013, Bloomberg made dismissive remarks about an attempt in the New York Legislature to legalize medical marijuana: “Yeah, right, medical, my foot. Come on. There’s no medical — this is one of the great hoaxes of all times.”

In 2002, he was against legalizing medical marijuana because it was a “slippery slope.”

In 2012, he seemed to look favorably on Singapore’s use of the death penalty against drug dealers: “In lots of places in the Far East, they have signs up, ‘Death to drug dealers.’ Think about the number of people who die from drug use here in this country. And yet we don’t take it seriously enough to dissuade people… Executing a handful of people saves thousands and thousands of lives.”

In 2015, Bloomberg pushed a debunked theory about marijuana use decreasing people’s IQs as a reason for not legalizing pot: “What are we going to say in 10 years when we see all these kids whose IQs are five and 10 points lower than they would have been? I couldn’t feel more strongly about it, and my girlfriend says it’s no different than alcohol. It is different than alcohol. This is one of the stupider things that’s happening across our country.”

Bloomberg was an exuberant cheerleader for stop-and-frisk policing — right up until a few days before launching his presidential campaign. Then he apologized for supporting it: “I can’t change history. However today, I want you to know that I realize back then I was wrong.”

One year before launching his first campaign for mayor, Bloomberg was asked by New York Magazine whether he had ever used marijuana. “You bet I did — and I enjoyed it,” he responded.

One more thing: Bloomberg is so clueless about tyranny that he recently denied that China’s Xi Jinping is “not a dictator.”

Not a dictator, huh?

Maybe Bloomberg never heard of the “re-education camps” that the Chinese government is cycling hundreds of thousands of Uyghurs through, or the Chinese “social credit” system that is as intrusive and coercive as anything out of Orwell’s dystopia.

Or over-controlling petty tyrant that he is, maybe Bloomberg is cool with them.

Or maybe, as Nebraska Senator Ben Sass remarked, “This is the kind of stupid you can’t script.”